I've been reading Dracula, and so naturally this derelict, locked-up mansion on the western (I think?) side of Rabat reminded me of Carfax, one of the houses Dracula buys in the London area to use as a base. You may think of 1313 Mockingbird and The Munsters, if you prefer. 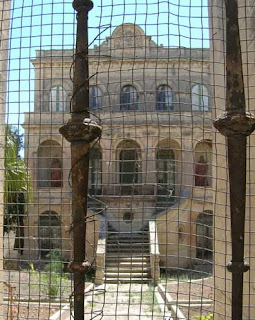 I took a middle-length walk from the bus terminus in Rabat, just outside the walls of Mdina, along the main road that leads more or less west (as far as I can tell) and out into the countryside. Because this road, unlike so many others, is a no-parking road, the traffic can move more freely (read: faster) which can make for a pretty scary experience for a pedestrian. The sidewalks are narrow, mostly 30 inches or so, I suppose, though occasionally dropping back to about 18 inches--and that's including the curb. When a car going 30 mph or so passes by only 18 or 20 inches away, it's kind of unnerving. When one of them honks, or squeals the tires, in between the high stone or concrete walls of the buildings on both sides, that's kind of unnerving too. Partly I walked this way because I just wanted to do some walking, and partly I wanted to see the Dominican monastery my guidebook showed as being on the road. According to the book, the monastery only has about 20 monks left. I don't think I saw any of them, though I did see some people coming and going. This photo shows the columns and arches along one side of the courtyard: 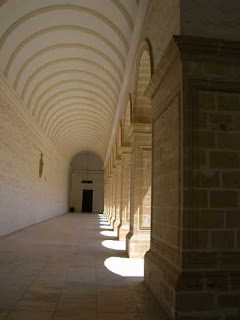 I couldn't help thinking that this courtyard and its colonnades would be a great place to sit, read and drink tea. I think the brothers ought to open up a coffee shop to soothe the weary tourist and bring in a little extra money. Places to sit and read outside (or inside, for that matter) are rare in Malta. The parks--often called gardens--are not plentiful and are not generally large. The trees in the gardens are often relatively small (owing, perhaps, to the lack of rainfall) and, frustratingly, are often not positioned to provide shade for the benches! The best shade along the seawall in Sliema, for example, comes in the last hour or so of daylight, when the highrises across the street (one of which I'm staying in, of course) block the setting sun.

Three of the four upper walls overlooking the monastery courtyard displayed plaques like these, apparently designed as calendars or some other sort of astronomical observation. Perhaps one of you will recognize what this is and tell us all by leaving a comment: 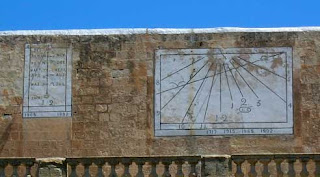 I was also curious about the significance of the years listed at the bottom of the larger plaque.

This photo comes from the front facade of the church next door, which I presume belongs to the monastery, which makes me in turn presume that the saint here is Dominic. You will notice that pigeons don't even respect saints! 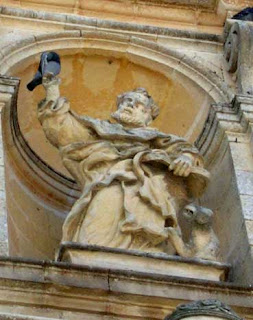 It wasn't terribly far beyond the monastery when I came to the edge of Rabat and walked for a while in the countryside. Here there were no sidewalks, which made the walking a little more nerve-wracking. I couldn't help but feel that the drivers, who so often drive right down the middle of the street if there is no oncoming traffic, were deliberately hewing close to the shoulder, simply to irritate the crazy pedestrian--me. I passed stone walls, some in better repair than others, and I could hear sheep bleating behind one of them. I don't know if these sheep, or another group of animals somewhere else, provided me with such a strong aroma of poop at one point. There was no open "range" that I could see--everything was broken up into walled-off fields. Just about at the point I stopped and turned around, I found this lovely little fixer-upper for any of you who are handy with home repair: 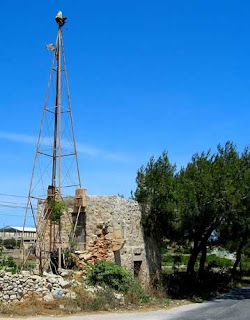 Back in the city I had a little lunch and then roamed around in Mdina again. It's such a beautiful and tiny place. As I mentioned to my sister in an email, Valletta is very much what you expect an old European city to be: tall buildings, narrow streets, shops on the ground floors with dwellings above them. And I like Valletta very much. But Mdina is truly like stepping into the past or onto another planet. It is all of a piece--the limestone walls that surround it, the limestone (or faux-limestone?) walls of the "blocks" within it. If you didn't know better, you might think it was an elaborate and expensive movie set. There aren't, as far as I can tell, individual homes in the sense that we think of it or even, as in Valletta, separate buildings in different styles which share side walls: there are, instead, big blocks with continuous outer walls, and I gather that individuals own their own "chunk" of it. So that, for example, one chunk may be beautifully repaired and restored and another chunk adjoining/attached to it may need some work (while still looking ten times better than a lot of the buildings in Sliema). Mostly it looks really cool. The residents are allowed to drive their cars in, but not the tourists, so there is mostly foot traffic.

One of the shops I roamed in for a bit today is Mdina Glass. It sells art glass--decorative glass--vases and bowls and dishes of all different colors; clocks whose glass faces display Maltese scenes: glass "canvases", as it were, of Madonna and Child. Mostly I wanted to see the inside of the shop which itself would make (and probably once did make) a beautiful home: two floors connected by a triple-turning staircase; big windows letting in lots of light; high ceilings; and the natural insulating capabilities of limestone.

Today's trip to Mdina and Rabat, my third, was the first on which I have gone "directly" to the two cities, rather than stopping and getting off the bus somewhere else along the way. It was not exactly a marvelous experience. Because of the state of Malta's roads, and the necessity of a bus to make frequent stops, and probably because the bus was taking a weaving route to cover a certain number of cities, the ride to Mdina took 50-55 minutes, and the distance--I would guess, as the crow flies--is probably no more than eight miles. The return trip was shorter--only 45 minutes!--but I spent 30 of those minutes standing because a tour group of German high school students and sponsors (I think I heard the leader tell the bus driver there were 22 of them) were on the bus as well, making it more than normally packed. And in case you are wondering, German high school students don't offer their seats to standing adults. (Nor, for that matter, despite the 200+ years of Malta being ruled by knights, does chivalry seem to be alive among adult men either. I've let women take my seat, but the practice doesn't seem common.) If one is sitting, one can read or watch the towns and countryside passing by; if one is standing and lurching, it's pretty dang hard to read, and the angle that one sees out the windows doesn't offer much of a view either.

My Maltese-Australian friends have booked themselves a week in Tunis. They talked to a travel office that offered a package including airfare, one week's accommodation in a resort with golf course, and two meals a day for 140 Maltese lira a piece. At 4 Australian dollars to one lira, they'll be spending a bit more $1000 Australian for the week, but for a couple that's not bad at all. They'll be doing this the first week I'll be in Gozo.

June 1st and 2nd are the birthdays of three of my cousins: Cheryl, Holly and Danell. I hope you all have great birthdays and a great year to come. (My sister Jane's birthday is Sunday, but don't tell her I told you.)

Cheerio!
Posted by Cooper Renner at 6:04 AM

first photo of the Dominican monastery has lovely shapes and colour