St Catherine of Italy and the Windmill Brass

This morning the Windmill Brass performed at the Sunday morning concert at St Catherine of Italy Church. In case any of you have been wondering what the church looks like, here you go: 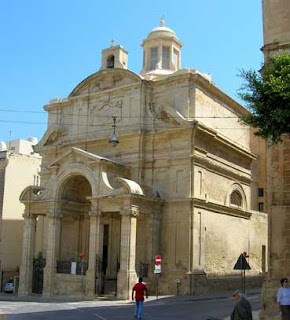 The Windmill Brass is a quartet formed of three English and one Maltese. The English seem to be husband, wife and daughter: they settled in Malta in 2005, near the northern end of the island, and the quartet came into being last year with the addition of the Maltese player. The woman I take to be the wife and mother was the introducer of music, if you will, and she mentioned that most composers write brass pieces for quintets. The quartet has to adapt, therefore, and sometimes one player or another has to do double-duty in their adaptations. For the concert today, they played pieces by Mozart, Mendelssohn, Gounod and other classical composers, as well as work by Gilbert & Sullivan, George Gershwin and the Beatles ("Lady Madonna"). St Catherine is a small place, and I imagine the stone walls add a lot to the resonance: the foursome filled the place with their music, making it sound as though more than four people were playing.

While the music played I worked on another sketch (and read a bit of Jewel of the Seven Stars), and after the concert a man asked to see what I had been working on. So I showed him and his wife the sketch, and they seemed to like it. (They didn't offer to buy it, though. Hehehe.) It's my not terribly accurate impression of looking from the left side of the chapel into the altar area. A bit of shape-and-pattern work, I suppose: 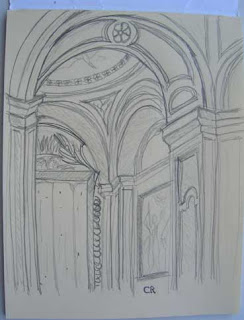 St Catherine is right near the Upper Barakka Gardens where I snapped this photo of a memorial monument. It commemorates a doctor who died in 1850 while treating patients during a cholera outbreak. Various officers and other military men had the monument erected, so I assume he was treating soldiers and sailors. Since it can't be more than 157 years old, it's interesting how much erosion has taken place near the base of the monument and on the pillars at the top: 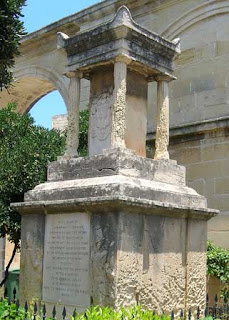 Also at the Upper Barakka was this noontime napper, enjoying the warm day in a time-honored fashion: 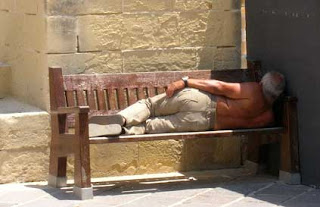 Today, 27 days after I arrived in Malta, I bought a map! So, you're thinking, is he nuts? Not entirely. My Rough Guide/Directions book has a number of small maps in it, and I have mostly been working with it as I have visited various sites here on the main island. But Gozo is more rural, with far fewer people, and should offer greater opportunities for longish walks in the countryside. In fact, the owner of the antique shop I visited yesterday told me that he had recently made a complete circuit of Gozo, staying as close to the coast as he could, and taking four days to do the entire walk. He said he spent about 7 hours each day walking. I don't know that I will do the complete circuit, but I would like to see some of the countryside on foot. Apparently the terrain of the coastline can be quite rugged, making it no simple matter to walk the island, even though it is not very large. The map I bought seems to show minor roads as well as major roads, along with important sites in the various areas, so it should come in handy. I may also, as odd as it may sound, visit the northern end of Malta, which I have not yet done, by taking the ferry from Gozo, which is quicker, I think, than taking the bus from here.

This plaque is on the facade of the Palazzo Parisio, which now contains the Ministry of Foreign Affairs. Hey, Napoleon slept here! 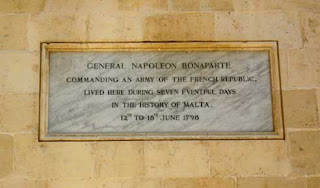 Along my way back to Sliema, walking again today, I took these two photos of parts of the fortification walls near the eastern (I think) edge of Floriana. Perhaps they make an interesting study in contrasts. This first one, blocking access to the highlevel of the wall, makes me think of East Berlin (even though I've never been to East Berlin): 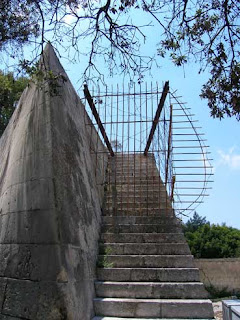 And this one provides a nice splash of color. If you look carefully, you can see how the fortifications were built upon existing limestone outcroppings. 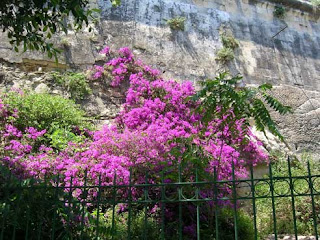 After one descends the slope that leads from Floriana down to Piet´ and Hamrun, one has to make a right turn and head toward the marina to head the shortest path, more or less, back to Sliema. This two gentlemen were spending their warm afternoon in a slightly more active way than the Barakka napper: 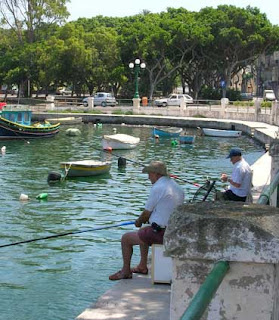 Today I've felt like I'm trying to fight off a sinus meltdown, making me wonder if the weather is about to change or if, maybe, all that rain last Monday made a bunch of deserty sorts of weeds blossom out. Wish me luck.

It's been one of the warmest days yet, and those of you in Texas will laugh that "quite warm" for Malta right now means 80 degrees, or thereabouts. It is sticky when it's warm and the wind isn't blowing, but nothing like as sticky as Dallas or Houston. July and August (by which time I won't be here) are considered quite warm, but I wonder how warm that is, given that so many buildings here, including my hotel, don't have air conditioning.

And being at sea level doesn't seem to be a boon for arthritis either: my finger joints are as tender as ever.
Posted by Cooper Renner at 7:24 AM