This is Arnaud (on the right) and Remi (on the left): 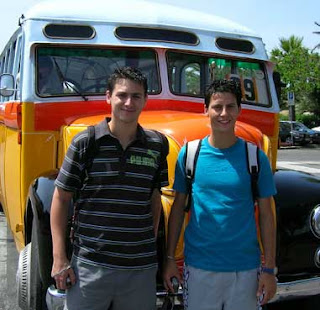 Both are interns, working in Malta this summer as part of their college programs at the University of Poitiers in France. Arnaud interns here at the hotel, so I have gotten to know him over the past few weeks as he has been on duty, usually at the front desk. He receives no pay for his work, but is given accommodations and 2 meals a day at the hotel. His degree program is in business management. Remi's program is in marketing. He works elsewhere and lives with a family not too far down the road from the hotel. He and Arnaud are good friends in France, so they have enjoyed being able to visit and stay in touch while they are both here. Remi and I just met today as the three of us took a trip across the island to the temples of Hagar Qim and Mnajdra.

Hagar Qim (pronounced something like AH-JAR EEM) and Mnajdra (here's a guess--mmNAYdrah) are only about 500 yards apart on a hillside overlooking the west coast of Malta. (Which, by the way, isn't all that far from the east coast. Malta is only 6 or 7 miles wide.) Both were built by the same culture that built the Hypogeum and the Tarxien temples, a culture that vanished (or, at the very least, stopped building) about 4500 years ago. The people had been building for more than 1000 years before that time, making these some of the oldest buildings in the world. To put it in comparative terms: this culture was done with its work a few decades before the Great Pyramid was built. They began their building at various sites before either the Sumerians or the Egyptians had invented writing. This photo shows what looks to me like the main entrance to Hagar Qim, but who knows how its people thought of it? If you let your eye roam on into the opening, you can see that it looks like a processional path.

As you can see, this is a much more wall-like building that what we see at Stonehenge, although the format is similar in places: two standing stones with a third stone laid over them horizontally. Does this mean there was cultural contact, or is it simply that this is a basic architectural form that predates the arch and so forth? Probably the latter, since the scholars say they have no way of linking this culture with anything preceding it or following it. There doesn't seem to have been outside influence on these early Maltese, nor do they seem to have influenced others. This shot looks to us like an altar, don't you think? Was it? Again, who knows? Notice the blending here of the megalithic (big rock) construction with the much smaller stones. The question is much the same as wit Stonehenge and the Great Pyramid: how'd they do that? 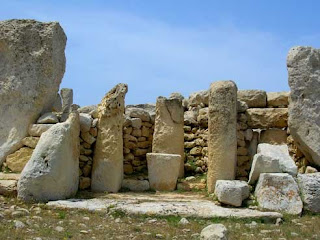 Unfortunately for simple tourists like Arnaud, Remi and me, the Malta authorities won't let you go inside these ruins anymore, unless you're on a special tour with a special guide. Wonder how much those cost? We had to do our looking and photo-taking from the outside.

Mnajdra is downhill from Hagar Qim and much closer to the water, although both are a good ways above the water. There is a sharp dropping-away below Mnajdra of I don't know how much: I didn't get close enough to look. Maybe 100 feet? I couldn't say. This photo may give you some sense of the "gap" between hillside above and water below. Here too you can see the mixture of large and small stones. That cluster in the upper right looks more Stonehenge-ish, don't you think? 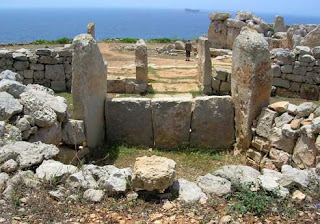 This is the same cluster, I believe, shown much closer up. 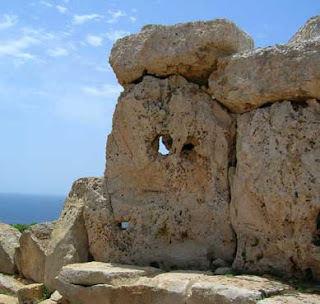 You can see how the weather has worn the stones over 5000 years--it seems to be a fairly soft limestone--though the holes in the standing stone were presumably (at least I'm presuming) put there by the people, rather than worn through later. There is a larger hole at one point in Hagar Qim which the scholars call the "oracle hole," presuming that it was used for messages from the gods or what-have-you. Given the prominence of female statues from these sites, the people may have been listening for messages from the Great Mother! According to my Malta guidebook, there is an oracle hole at Mnajdra as well, though maybe it is somewhere inside, where we were not permitted to go. My guidebook, published in 2005, says nothing about being restricted to the outside of the temples and even displays a photograph of an altar which we did not see. So the restrictions must be fairly new.

Here's another photo showing what looks like a processional way. (The ropes and poles are, of course, modern!) Wish I could have gone inside. . . 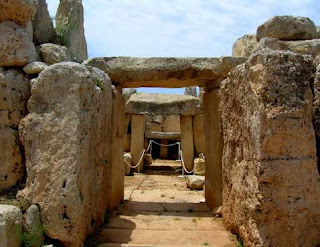 The three of us had our picnic lunch--I had tuna and applesauce; they had sandwiches they bought from one of the seawall kiosks before we left Sliema--on a stone wall overlooking Mnajdra and the sea. It is definitely a pleasant place to sit, visit and eat. After eating and finishing up our time at Mnajdra, we headed across the slope overlooking the sea to the Congreve Memorial. It looks like a large tombstone, but Congreve--a British Governor of Malta--was actually buried at sea just off the coast here, so the marker is just a memorial marker.

Going on toward the southeast, we came to Hamrija Tower: This is yet another of the Knights' defensive structures, built in the 17th century, I think, and affording quite a view of the sea to the west and south of here. I don't know what kind of communication system they used: whether they sent riders out with messages if a potentially enemy ship was spotted, or if perhaps there were watchtowers in a line of sight that employed mirrors or fires. I'd love to convert a building like this into my house and used bookstore.

After visiting the tower, we headed back up the slope, a fairly strenuous climb, and then back to the main road, down the main road to the Blue Grotto cut-off, then down the cut-off to a cluster of restaurants and shops where boats embark to show tourists the Blue Grotto. Remi has been on the trip on a previous occasion, and the boats weren't running today anyway, because the wind was so high it's dangerous for them to enter the grotto. We ordered Coca-Colas at one of the cafes (all of us had long since drunk all our water) and were promptly brought three Pepsis! After a bit of a rest for our feet, we climbed back up to the main road and walked a little farther along it to a very nice lookout point. This is not the Blue Grotto, which is a legitimate cave which the sea washes into, but it is still a nice view, don't you think? 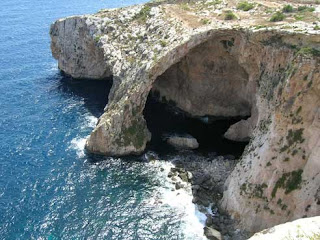 And of course it's the perfect spot for creating stories about doomed sweethearts or something like that: yet another Lover's Leap!

We were all pretty tired, I think, by the time we got back to the hotel. I headed down the road to sit at Stella's cafe, drink tea and answer email and work on the Travel Log. But Stella's was closed! Today is a holiday--maybe Independence Day--and many of the stores were closed. At the Plaza, only McDonald's was open. So I had to sit on the seawall in the shade and try to do my Internetting. It was not terribly pleasant. The wind was roaring, blowing dirt and leaves and even a very light haze of sea spume on me and the computer with a good deal of regularity. So I was pretty quick about doing my major "business" of the day and closing down much more quickly than I normally would. Tomorrow I will have to try to catch up on what I didn't do today.

Yep, the wind is roaring again. It was pleasant enough on the west coast, walking up and down hills in the heat of the early afternoon, but it's quite unpleasant here at Sliema, with a little bit of a feeling of being salted! My fingers were actually getting sticky as I typed on the laptop keyboard, so I wiped it down once I got back to the hotel. No nice evening walk today; no last cup of tea on the seawall. Better to sit in the hotel room and look at the waves smashing the rocky shore across the street. If these waves aren't bigger than any I've seen so far, they are at least as big as any I've seen so far. Yesterday the Mediterranean was at least as smooth as a lake; today the waves are whitecapping like the Gulf of Mexico. But the temperature is pleasant, and the skies are blue, so those are both pluses!
Posted by Cooper Renner at 6:26 AM

Mister, I am gobbling up your words greedily. I can't get enough, so please don't hold back.

Ca y est--you now have someone to visit in Poitiers!

the Maltese adventures of mr Renner are truly recommended reading.