I will try to do a better job of noticing this morning, but I believe the sky begins to lighten by about 4:30. Certainly the light woke me more than once before I actually got up. I just rolled over again and went back to sleep. I was tired.

I had toast, tea and dry cereal for breakfast at the Springfield--and a full breakfast was offered me, but I had to turn it down. The Springfield certainly offers the most complete spread that I have seen since leaving the ship--egg, breakfast ham, baked beans, sausage (I believe the English say rasher; is that correct, Lou Ann?), coffee, as well as what I had myself.

Once again I spent most of the day on my feet. My metabolism seems to be racing from all the activity, so I told myself that I can have all the sugar I want in my tea, since my body will burn through it in just a few minutes anyway!

I took off walking, trying as best I could to follow the central London map Air Malta gave me, with Westminster Abbey as my goal. It is maybe 2 miles from the hotel; maybe not quite so far. But I had no need to hurry, and I like to walk anyway. I came through Hyde Park and then down Park Lane to the Wellington Arch. I got off on the wrong side-street at one point and ended up on Piccadilly, which would have carried me away from Westminster Abbey. To get to the Wellington Arch, in honor of the famous duke, one has to go into an underground walkway and come back up again. The arch is in a little park, surrounded on all sides by broad streets with heavy traffic. Here's a shot of the arch: 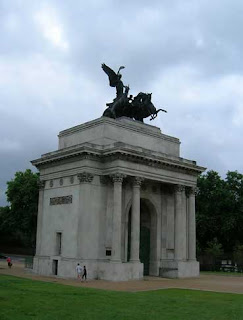 The park also contains a World War I memorial and an unusual multi-piece sculpture which must be in honor of the fallen soldiers of New Zealand. The individual pieces look more or less like steel girders, except they are +-shaped, instead of shaped like I-bars or T-bars, so that each bar, angling up from the ground, ends by displaying a cross to the viewer.

Leaving the Wellington Arch, I walked along a road called Constitution Hill, with a beautiful park on both sides. Then, as one comes to where Constitution Hill becomes "The Mall", and Spur Road comes in on the right, there is Buckingham Palace! When I reached there were, of course, a great many tourists out front, but the gates were closed. I don't know if this meant that Queen Elizabeth is in residence, or if it just wasn't quite time to open yet. I think it was about 10. Here's my shot, nothing to write home about, taken through the iron railing fence: 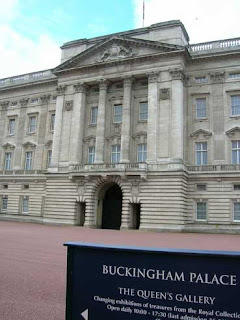 And this is one of the guards, way off across the open plaza in front of the palace, so that he looks almost like a toy soldier:

The changing of the guards occurs about 11:30, and I thought to myself I might make it back from Westminster Abbey by then to watch (but I didn't. There'll be other days.) I moseyed on down Spur Road to Birdcage Walk (don't ask me why it's called that), and soon there it was, right ahead of me: Westminster Abbey: 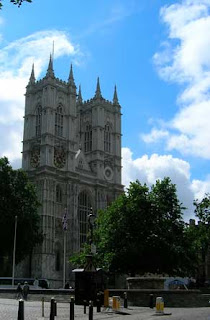 By this time, my breakfast had sort of worn off, and there across the way from Westminster Abbey, was some sort of Methodist building with a cafe open to the public. So I went down to the cafe and had a pot of tea and a small roll. (And this qualified me to use the "water closet" too. Sometimes one has to pay to use the bathroom in London!)

The photo above shows the front of the Abbey, and that is the main entrance for services there. But the tourist entrance is off along the north side. At the moment, the museums in London which the government owns are free to the public (although the Conservatives have said they will change that policy if they regain power). But Westminster Abbey "receives no financial support from the State, the Crown or the Church," and the entrance fee is 10 pounds (about 20 dollars). But oh my, what a place! What a wonderful place.

It is, to be sure, a beautiful building even if one knows nothing about English history and culture--the "sentimental" attachments that people have to the building. Its pillars and windows just soar up into the air enormously, making St John's Co-Cathedral in Valletta feel small by comparison. Its history goes back to 960 AD (says the brochure), and King Henry III began the "present church" in 1245. Many kings and queens and nobles are buried here, and many other famous English people are either buried here or have plaques or memorial stones here: Charles Darwin, Isaac Newton, Winston Churchill. But of course the "poet's corner" really drew me. Geoffrey Chaucer, who died in 1400, I believe, is buried here. And there are burial or memorial stones or plaques for Shakespeare, Wordsworth, Coleridge, Byron, Keats, Shelley, Dickens, Jane Austen, the Bronte sisters, Lewis Carroll, and--especially cool for me--Thomas Hardy. Hardy, I'm almost positive is not buried here, though his heart may be. I had to squat down and touch his small square stone on the floor.

The tombs of kings and queens are huge impressive works of art--reclining statues on top of heavy carved stones. Queen Elizabeth I and her sister Queen Mary ("Bloody Mary") are buried together, and even Mary, Queen of Scots, is buried here--though that came about after her son James VI of Scotland became James I of England and not while Elizabeth I was queen. Anne Nevill, wife of Richard III, who died in battle against Henry VII, is also buried here, a burial which must have taken place while Richard III was still king--surely his enemy Henry VII wouldn't have allowed his wife burial in the Abbey. King Edward the Confessor, whose death in 1066 set into motion the events which led to William of Normandy invading England from France and becoming King William I of England (William the Conqueror) has an enormous shrine in the Abbey, though it can only be glimpsed in bits because so many later additions to the Abbey block view of it. One of the Abbey marshals (I think that's what his badge said) told me that his body was removed at one point, and then later returned to the Abbey. To the east, I believe, of the shrine is one of points at which you can see parts of it--and on that side is the Coronation Chair for the kings and queens of England. According to the brochure, Edward I ordered it built in 1301, and it has been used in every coronation since: Edward II was, I think, the first to be crowned in it. The Stone of Scone was for many many years kept under the coronation chair, but was returned to Scotland about a decade ago, though it will come back to rest under the chair temporarily, for the next coronation. (And who will be sitting on the chair? Charles, or William? Will Queen Elizabeth outlive her son? She is already one of England's longest ruling monarchs, though she hasn't yet equalled George III's 60 years or Victoria's 64.)

The Chapter House is a lovely chapel-ish building outside the main abbey with tiles on the floor going back to the 13th or 14th century and much faded paintings on some of the walls. The high stained glass windows are newer, replaced after being broken in World War II, though some of the pieces have been taken from 19th century windows. Several centuries ago, the Chapter House was the meeting place of the House of Commons, which must have had far fewer members in those days!

Westminster Abbey was a grand place to begin my official "sightseeing" in London, and I look forward to going back next week when Susan arrives. After leaving the Abbey I took this photo of Big Ben which is just about a block away. 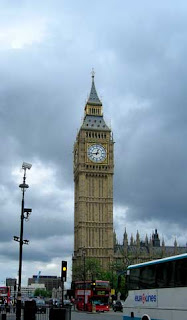 Not long after I snapped this photo of one of the Horse Guards: 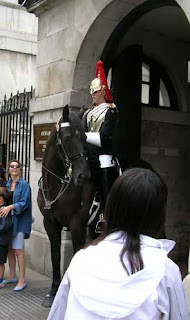 I had lunch--ham on wheat bread and a cup of tea--while sitting on a low ironwork fence in a tiny park behind the National Portrait Gallery, right near a statue in memory of Henry Irving, a prominent 19th century actor for whom the author Bram Stoker (Dracula) was business manager. Then I roamed up Whitehall Road, which sort of turns into Charing Cross Road. I visited some used bookstores and then, as I neared Oxford Street which is supposed to be the, or one of the, premier shopping areas of London, some new bookstores. I visited Blackwell's, Borders, and an independent called Foyles. There I bought a novel in Spanish called Las puertas templarias by Javier Sierra, who also wrote La cena secreta (available in English as The Secret Supper), which I hope will be a fun read.

It showered three or four times today as I was in and out, so the cheap umbrella I bought yesterday came in handy. At various times it was comfortably pleasant or just on the edge of chilly. I kept my windbreaker on all day. There was sun from time to time, but mostly it was cloudy. Then, this evening, just as I was nearing being finished with email and the Travel Log and elimae, a man asked if he could share the table I was at, because Starbuck's was crowded. I told him sure and that I was nearly finished, and then we chatted a bit as I got ready to go. He said he lives nearby and that it's a really nice part of London, and he asked what part of the States I was from. There was another American at the next table, and he heard us talking and it turns out he is from Houston. He has been in India on business, then London, and returns to Houston tomorrow. There are a lot more Americans in London than in Malta! No surprise there, I reckon.
Posted by Cooper Renner at 10:27 AM

Well, dang. I posted something (I thought), but it isn't showing up. So here goes again. The "ham" you saw at breakfast is actually a "rasher" of bacon. The sausages are called "bangers," and they're more cereal than meat (there was a big to-do over this regarding the European union, I recall, but there was no messing with the Brits' bangers. The beans are to be served over toast. You might also see something that looks like a black turd and a whitish turd--those are black and white "pudding"--blood sausage. I love all the breakfast things, including the bangers, except for the pudding.

Yikes! I think I'll stick to toast and dry cereal.