When I arrived at Valletta this morning, a colorfully garbed middle-aged man had this machine playing while he solicited donations: 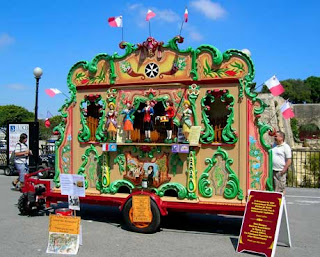 Functioning like a player piano, with a long sheaf of folded pages (rather than a roll) causing the music to be made, it had a couple of drums as well as a tune-playing thing. You can probably make out the doll-like figures standing front and center, under the Maltese cross on the upper register at the top. There was some kind of little engine near the wheel at the left end. The man cranked it up and then easily began to roll it to a new location. Later in the day I saw him inside the gates, a block or so into the city walls, still playing and holding out his tip jar. At that time I saw a man with a little boy, a toddler, who seemed a little unnerved by the noise it made.

As I made my way down Republic Street toward my main visit of the day, I came to where St John's Co-Cathedral and the Courts of Justice are on opposite sides of the street. And there was a bomb disposal van parked in front of the Courts. The seal on the side of the vehicle was military, not police, so it may be that such matters are always handled by the military here. But if there was any real "threat" going on, no one seemed too concerned by it. The street--which is mostly a pedestrian way at that point--was not blocked off at all, and I was practically at the vehicle before I even noticed what it was.

My "main" visit of the day today was to Casa Rocca Piccola. This is a private residence, built in the 16th century for one of the knights but long since owned by the de Piro family. The current owner is the 9th Marquis de Piro, who is also the 9th Baron of Budach. I don't know exactly what this means. Malta is some kind of a parliamentary republic: it has, at least, a parliament, a president and a prime minister. Does it also have a hereditary nobility? I'm not sure. When the barony was created, about 300 years ago, the Order of St John still controlled the island. What would have been the terms under which a priestly military ruling order would have created noble titles? You got me! Maybe one or two of you will Google the information up and put it in a comment for the rest of us to read. Because it's a private residence, there are only certain rooms one is allowed to enter, and then only on the guided tour. This means you don't really get to look around as long as you might like in the various rooms. I, for one, would have loved 15 minutes to browse the library where I glimpsed a lot of poetry volumes. But when you're in someone's home, they get to set the rules, yes?

Only one of the rooms still has the original flooring exposed: in the others it has been tiled over. This room is the Sala Grande (Great Hall or Great Room), which isn't actually terribly big, but has--the guide told us--the highest ceiling in the house. It looked to be about 15 feet high. Throughout the rooms we were allowed to enter were paintings, some of them of family members, some with religious significance, others simply paintings; old furniture, including one piece made in Malta in the 16th century; and various cases displaying objects from the family's (or Malta's?) history. Perhaps most interesting was a case containing several different chess sets in various designs.

One room features the bed upon which one of the baronesses gave birth to nine children, all of whom lived--quite an achievement in past centuries. It's considered a good luck object for that reason, and we were encouraged to touch it. An old crib, with a wooden frame, was also in this room. Another room is (was?) the family chapel. The guide told us that one of the younger sons in each generation was always urged into the priesthood. (And in fact, the Order of St John was essentially made up of younger sons of the nobility, who would not have inherited lands and titles from their fathers in the normal run of things.) The guide today mentioned that a man had to be at least fourth generation nobility in order to enter the Order.

Before we went into the library, the guide took us through the Archives, which contains books about the family's past. Some of the books in the cases were quite tall, with aged and exposed bindings. It would have been interesting to see inside some of them as well. The house also has a sedan chair, and the guide mentioned that being a sedan chair carrier--who might have been a Turkish or African slave--was considered a plum assignment, since they didn't usually have to carry the master very far, over to another knight's house, or sometimes from one place to another within the house!

The only room in which we were allowed to take photographs was the dining room, a newer addition to the house, full of windows and light, and therefore not requiring flash. Here is your place setting, and the little stand with swords and shield indicates whose place that is. 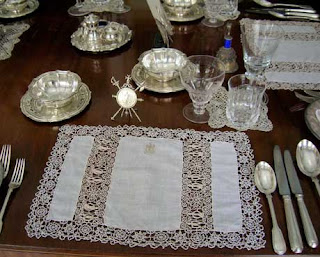 This photo looks down the length of part of the room, showing most of the table, the statue at one end, and a glimpse into the next room: 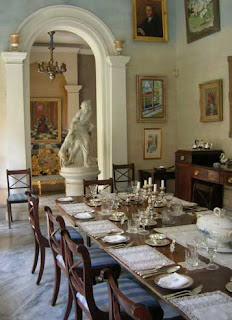 And this photo, looking at the same end of the room, but tilting up, shows (I think) the 8th Baron and Baroness, although it might be the 9th--the current ones. The 8th Baron & Baroness, when they would have been relatively young, were invited to Queen Elizabeth II's coronation, and in one room there are photos on display of each of them at that time. The 8th Baron died in the '90s (or there wouldn't yet be a 9th!), but his widow is still alive. I believe the guide said she is 89, and she lives in the house with her son and daughter-in-law. 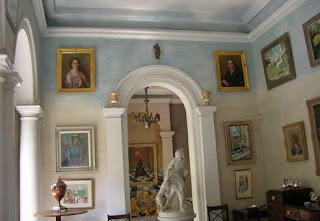 Perhaps more interesting that the palace itself, at least for me, was what's under the palace, part of which we also got to see. Under the palace, in the old days, were two cisterns (remember that Malta is a desert), and there are a number of passageways and staircases which, I suppose, were used for getting to and from the cisterns and doing various duties. The cisterns are included on the tour because they were converted in World War II into bomb shelters. The family emptied out the water and set up one of the cisterns for the family and their servants to use during air raids, and the other one was opened for up to 150 members of the public to hide out in. It was a little bit like being back in the Hypogeum or St Agatha's Catacombs walking through the passages and looking down into the former cisterns. Lots of rough limestone carving down there: very appealing in a troglodytic sort of way. When we came up the stairs out of the "underground", we came up into the family's courtyard, a lovely place surrounded on all sides by the house. It would have been a very peaceful place to while away an afternoon.

There were only two of us on the tour with the guide. The other was an elderly Maltese woman who said she was pretty sure the family also owns a residence in Mdina, although the tour guide (a fairly young woman, maybe even a high school student) wasn't sure about that.

The family also makes money from a restaurant in part of the house (which looked very nice) and from the gift shop where the tour begins, which sells books, jewelry, CDs and so forth, connected with the history of Malta.

After lunch I visited a photography exhibition at the Italian Institute of Culture (which may not be the exact name). The photographers were all Maltese, and this was the 40-something-th annual contest. Some of the photos were from other parts of the world (the photo of 3 young Buddhist monks probably was), but most seemed to be Maltese people or settings. There were some very well-done photos of older Maltese people, very expressive character studies, and some beautiful natural scenes. All of them were technically accomplished, though some of them seemed over-the-top to me: trying too hard to make something more beautiful than it really ought to be.

And yesterday or the day before I visited a couple of other exhibitions as well. One was all the work of one Maltese painter who apparently does mostly watercolor. Some of them were likewise too prettified, but they showed skill. Many of them had already sold. The other exhibition was at a school, formed in 1852. It seemed to be more or less what we would call a vocational school, except that the arts, not just technical fields, are offered. It was founded to assist young Maltese in preparing for the future. The first room of the exhibit featured paintings, mostly abstract or near-abstract. I say "near-abstract" because some of the works suggested to me Maltese street scenes: buildings, etc. The second and third rooms were life drawings--pencils and pastel crayons--mostly nudes, though a few were semi-nudes, much like the studies many artists do as they prepare to create a painting. They too showed a great deal of skill. There is certainly no lack of artistic talent in Malta.

Yikes! Today a group of 28 Austrian (or Australian?) girls with their 4 adult sponsors checked into the hotel. I hope they sleep late or get up very early in the morning, so that the breakfast room won't be swamped!

Feet: Today while riding on the bus to Valletta, I was reading some of the time, and so my head was tilted down, and at one point when I glanced aside from the book, I saw what seemed to be enormous feet. Over the next few minutes, I tried to slyly look a few more times. The man in question wasn't terribly big, though he was big-boned, I suppose. His sandals exposed most of his feet, which--when I studied them a little more--weren't all that big either. The thing was that, at a glance, they looked big because so much of the foot was toes! Perhaps a sixth or seventh (or a fifth?) of the whole length of his foot was the toes. I'm sure he could learn to write with them, and maybe even to play a toy piano! I promise you these were toes that could grace a Michelangelo statue.
Posted by Cooper Renner at 7:20 AM

so big foot has also moved to Malta
puts me in mind of a description of a peasant woman’s foot
by D. H. Lawrence in one of his short stories