Ggantija Temples! and a BIG Round of Applause for Air Malta

I've felt a little less out of sorts today, and a couple of times this afternoon and evening things were practically downright fun. But first to the historical sites:

Ggantija Temples: Ggantija is pronounced something like gee-GAHN-tee-uh and means what it sounds like: gigantic. The temples had pretty well been covered with dirt over the millennia, leaving a big mound with a big wall around it. The Maltese (or, more specifically, the Gozitans) thought whatever it was must have been built by giants. A British government official around 1820 did the earliest recovery work here, using prison labor (remember the old prison, from yesterday?) and paying the other expenses personally. In 1980 it was named a World Heritage Site by UNESCO (there are now a bunch of those sites in Malta). There are scaffoldings up at various places right now--though I don't know what they are doing--and the outer wall at one point is braced by t-bars.

There are two temples within this outer wall and, while I don't expect you to read this photo of a basic explanation of the place, I thought you might enjoy seeing the plan here, so you can sort of imagine how they're laid out: 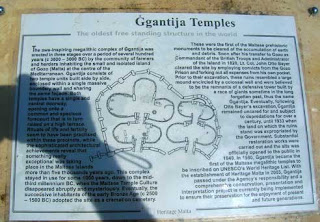 The scholars use church architecture terms and say the bigger (and older) temple on the left has five apses (the clover-leaf-looking sections) and the right has four apses. Both temples have central aisles and, presumably, altars. Like maybe in this photo: 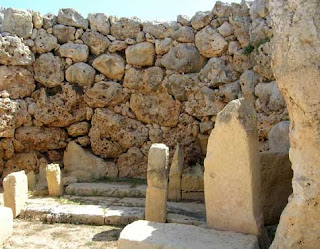 This shot was taken up the central aisle of the smaller temple (if I remember correctly). That one is currently blocked off so that you can't enter it: you have to stand at the beginning of the central aisle and look down it. 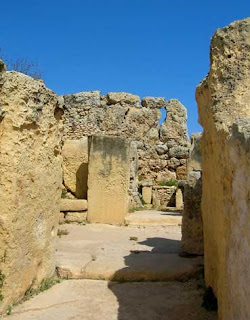 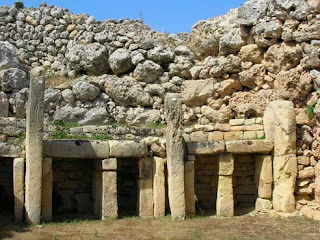 I took this one at the back, looking at the surrounding wall. My tour guide says that one of the rocks weighs 55 tons and is as big as a pickup truck. I wonder if this one, in the center, is that rock: it looked as big as anything else I saw. 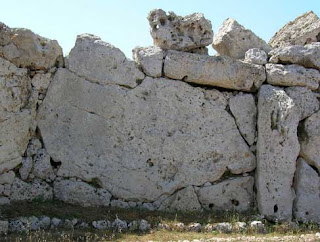 These temples are the oldest of the Maltese temples, with first construction beginning about 5600 years ago, more than 1100 years before Khufu's Great Pyramid. The unification of Egypt into one, rather than two nations, is dated at around 5100 years ago, so this predates that. And full-blown writing, as opposed to what are apparently counting notations, dates to roughly 5000 years ago in both Sumer and Egypt. So these dudes in Malta were doing some heavy architectural work at a very early date. According to the information here, this is the oldest free-standing building in the world. Amazing to think about.

The explanatory material here says that Malta seems to have been inhabited from Sicily around 7000 years ago, so more than 1000 years passed before they began building these enormous buildings on Gozo and Malta, and their culture seems to have been confined to these two islands. The temple building, as I've probably mentioned earlier, continued until about 4500 years ago, when it fairly abruptly stopped. No one knows what happened or why the people may even have abandoned the islands. Cool mysteries to ponder!

After finishing up at Ggantija, I walked on down the road, not terribly far, to the Ta' Kola Windmill, which dates back almost 300 years. I can't remember now if it was the first windmill on the island or not--I think it was. I believe the material said that horse- or donkey-driven mills had been used earlier (and there are no rivers for water-powered mills.) I took some pictures inside, but they didn't really seem to be anything exceptional, so I won't include any today, except this one from outside. While I was waiting for the bus to go back to Victoria, the vegetable man came calling on the street. Apparently he has regular customers, because he wasn't going from door to door, but to specific houses. At first he was parked by the bus stop and I thought maybe he was simply going to sell right there, but he moved on down the street, passing a number of houses, before he stopped again to honk. Just before he left the bus stop, I remembered that Alek Lindus, a writer and photographer in Greece, had published photos just a few days ago of similar occurrences in Greece, and I thought I'd better snap a photo too. The seller was several houses away before I got this shot, using the mini-zoom on my camera. It turned out to be a bit of serendipity that the Ta' Kola Windmill is in the background. The woman in the foreground was cleaning/mopping her front sidewalk/curb. Since it's right out her front door, of course, that's not a bad thing at all to do, but I wonder how many Gozitans do so. 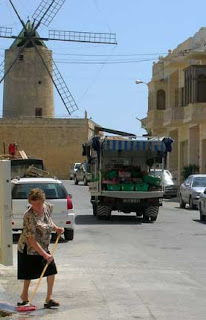 After visiting the two historical sites, I headed back into Victoria, had some lunch, and then went to do wifi, posting yesterday's happenings and answering email. I also did some searching for hotel or bed-and-breakfast possibilities in the event I made the flight change to go to England several days early. And as it turns out, I am!

After working at the wifi hotspot for quite a while, more than 2 hours, I think, I decided I would go back to Air Malta's Gozo location to find out the status of the June 21st flight, if plenty of seats were still available, etc. As it turned out, there were only two seats left in my "class" (economy, I think), but the price to transfer to one of those seats from the 27th had dropped from 41 Maltese lira (around $130) to only 26 Maltese lira, so I made the decision to go ahead and do the change. Even though I didn't have a solid booking in England yet (I haven't gotten a reply from a B&B I contacted, where I currently have a reservation for July), my browsing and searching at the hotspot gave me the idea that I would be able to find something--perhaps not in London, but in another town/city that I could explore before returning to London to meet Susan.

Well, one of the Air Malta guys mentioned that they offer special deals in London, which they have worked out with some of the hotels there. So we checked the cheapest one (which will be about $80 a night) on TripAdvisor.com, and the first review of the hotel that came up was posted just last month and gave it thumbs up. So he sent a query to them (he can't do the booking himself) to see if they have a room available for the nights I will need, and he also instructed the computer system to route the reply to Air Malta's location at the Malta airport, which is open on Saturdays and Sundays, since the reply should come in tomorrow, when the other locations are closed. Then he gave me a phone number to call to find out if the hotel is available. If it is, all I have to do is take the bus to the airport and reserve the booking with my credit card!

So it's a big round of applause for the guys at Air Malta, for really being friendly and going out of their way to help me. And if the room isn't available, he said they might make an alternate suggestion. And if neither of those possibilities pans out, then I will know and can either go back into hotels.com and make a booking online or just head to Bath and find a b&b. Normally I would be a little leery of heading off with no booking in advance, but later in the afternoon, when I visited the domed church of St John the Baptist in a little town called Xewkija, I got into a conversation with a young English couple when they asked me what time it was. I was able to get their pointers on the situation, and they said they thought I could easily just take the train or bus to Bath from Gatwick, go to the information center in town, and find a b&b with an open room. (And since tripadvisor.com lists 86 [!] b&b's in Bath, they are probably right! Oddly, though, tripadvisor.com didn't give phone numbers for the places they have rated, so I wrote down a couple of names.)

Aren't you tired of my travel arrangements?

When I left Xewkija, I walked on back into Victoria for no better reason than to walk and to be in a town where there's a little bit of signs of life. (In fact, earlier in the afternoon, in a little cafe near the bus terminus, I found--for the first time since leaving the US, I think--a PLAIN CAKE muffin! It was quite good.) Along the way, I snapped this photo, which I'm pretty sure was in the city limits of Victoria. And yes, the sign really does say: 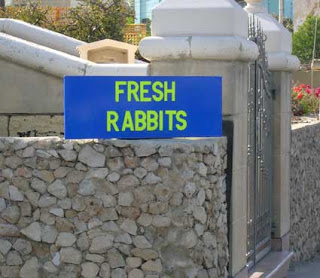 The house or business next door had a sign offering fresh rabbits, chickens and eggs. I think I can hear some of you groaning all the way across the Atlantic Ocean.

Then, while waiting for the bus back to Ghajnsielem (which goes on to the ferry to Malta and gets a lot of passengers), I got into a conversation with another young couple also waiting for the bus. They are Canadian and had spent part of the day riding rented bicycles from Victoria up to the northern coast where the swimming is supposed to be good and the view great. They said it was beautiful up there, though part of the ride was very steep. We talked for 40 minutes while we waited for the bus, then continued talking on the bus as well. Her grandmother is Maltese, and they are visiting Malta and staying with an aunt. They had already been to London (or Paris) on their way to Malta, and will be stopping in Paris for one night again on their way back to Canada. We also talked about music and how so many music stores are vanishing. The young man has been to Austin and thought that the center of town there was in some ways like Ottawa, where they live. And we talked about Toronto (they don't like it much) and the whole French language thing in Quebec, and about my traveling, and about some of their other travels. They were a charming duo, and it was quite a delight to spend time with them.

Well, it's getting on toward midnight, and tomorrow is my journey back to Malta and into Valletta, not for my first time, but for my first time with lodging there! So I guess I'd better close out, eh?
Posted by Cooper Renner at 3:43 AM

Aren't you tired of my travel arrangements?

Aren't you tired of your travel arrangements?

I could not resist.