Music at St Catherine of Italy and HMV

I've ridden the shuttle ferry from Sliema to Valletta several times now and walked up into (or down from) the city by passing through this arched gateway, but this is the first time I've consciously noticed the dating plaque on the surface inside: 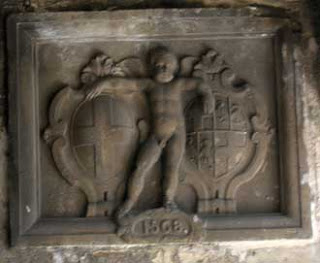 Yep, it says 1568, only three years after the "Great Siege" when the Knights of St John and reinforcements from the mainland fought off an Ottoman fleet.

When one walks up toward the center of Valletta from the dock where the shuttle comes and goes, one of the streets that's easy to use is St John Street, or Triq San Gwann (I think I spelled that correctly). As one climbs this street from sea level where the dock is, up to the hillcrest in the center of the city, one passes the Hollywood Market, which I've mentioned before; Caffé Café, where I've had tea once; and this small record shop: 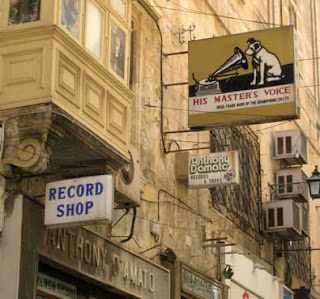 The Antonio D'Amato Record Shop has been in existence (whether in this exact spot or not, I don't know) since 1885, as the engraved stone on the entrance floor notes. It warms my heart to see a real record store like this, even if, once one is inside, most of the "pop" is the same old radio hoohah once seems to hear everywhere in the world. For a store of its size, it has a fairly sizeable classical collection, a great deal of it on the "budget" Naxos label, and on some out of the way shelves to the left of the entrance, I saw the tell-tale spines of LPs! The shop also sells DVDs, which is probably essential for its business nowadays. I took a photo of the front of the store, below these signs, but once again my camera program is balking at downloading the image. It shows the label at the top of the main window which says HMV & MGM Records. I have to wonder how old that label must be if MGM Records would be considered a draw to customers!

I attended another performance at St Catherine of Italy after lunch. Marita Bezzina, a Maltese operatic soprano, sang 10 different composers' settings for "Ave Maria," accompanied by Michelle Cachia Castelletti on harpsichord. Castelletti was supposed to play the beautiful small organ there in the church, but the hostess said it was not functioning properly: one of the stops was not working, she presumed because the variations in the weather here in the past few days.

It was a lovely concert, featuring both the -- to me -- most famous "Ave Maria" settings, those of Schubert and Bach/Gounod, but also containing settings by Verdi, Fenech (a Maltese composer), and Mascagni, whose name I didn't recognize, but whose tune I did. After the performance I asked Bezzina if it has been performed with another set of lyrics, and she told me no, but that it comes from Mascagni's opera Il cavalieri rusticane (I swear I've misspelled that). I'm pretty sure a performance of it is on the Movies Go to the Opera CD from the early '90s, and I'd imagine quite a few of you would recognize it too. It's quite a remarkably lovely tune. Bezzina said it's often performed by orchestras as an instrumental piece.

While listening to the concert, I worked on this sketch, inspired by a section of the fortifications down by the shuttle dock. You will note that I have wrongly arched the church roof seen through the window! Ah, me, perspective! 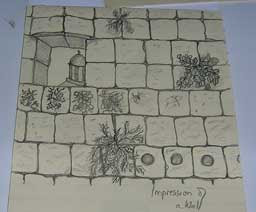 The ugly mess on the row of stones under the window is my attempt to reflect the unusual weathering on many of the stones here, which makes them look somewhat like the coral the rock may once have been.

I had a post-concert snack in the Upper Barakka Gardens and got into a conversation with a mother and grown son from one of the suburbs of London. I gathered that this is their first visit to Malta, unlike most of the English I have talked to here. They are quite enjoying themselves and recommended that I take one of the harbour tours, which I have not done so far. The mother also mentioned vacations to the Channel Islands with her children when they were young. Jersey, one of the Channel Islands, is on my itinerary for July as I go from England to France.

A pleasant (though very small) surprise when I checked my credit card billing this afternoon: the dollar has inched up (actually it's more like it's millimetered up) against the Maltese lira since I arrived two weeks ago. My bill for my final 15 days here at the Europa, which I'd imagined would be something like $383-384 when converted from lira to dollars, was actually a little under $381. Ah, the small joys of retirees!

I have now been in Malta longer than I have been anywhere except the United States. I was in Canada for a week in '76; the Bahamas for a week in '79; Germany and Austria for 6 or 7 days in '86 (sponsoring high school students!); and my visits to Mexico have been only just over the border, and never for a night. The cruise was 16 nights, and tonight is my 18th night in Malta. I wonder how to "place" the cruise: some of the time we were in US waters; sometimes in Portuguese, Spanish, French or Italian waters; and some of the time in international waters. What do I call it: dislanded? After Texas, I have spent the most time in Arizona (where I lived for one school year and which I have visited several times). After that, it's probably California, Florida, and New Mexico in a pretty tight cluster. And then, I reckon, it's Malta. An odd thought.
Posted by Cooper Renner at 6:50 AM

History of the dog [his master’s voice] called nipper

Found as a stray in Bristol, England in 1884, and so named because of his love of peoples ankles,
Nipper spent all of his life in relative obscurity. He was the pet of Mark Barraud, a Bristol theater stage set painter.
Upon the painter's death in 1887, Nipper was adopted by Mark's brother, Francis Barraud.

Francis, also a struggling artistic painter, noticed one day that the fox terrier was listening intently,
head cocked; to a cylinder phonograph he had playing in his studio and Barraud "often noticed how puzzled he was to make out where the voice came from"
(anyone who has ever owned a dog knows that they cock their head and listen intently to ANYTHING strange!).

After returning to live with his first owner's widow,
Nipper passed away in September of 1895. His burial site, in a garden at Kingston-upon-Thames, in England, is marked with a plaque.

Mascagni's piece is indeed on Movies Go to the Opera and was used in Raging Bull. I'm listening to it right now! (Not a coincidence, I pulled it up on my Itunes list--had that cd since NM days.