Get out the NERD posters: today at the National War Museum I actually took notes so that I could remember more clearly some of the things I wanted to let you know about.

The War Museum, not unlike many of Malta's museums, houses a really interesting collection in a building which needs some work. Unfortunately there is work going on at this museum at the moment, which put some of the exhibits off-limits. World War II is not a period of history which I've been terribly interested in, but the War Museum does a fine job of showcasing Malta's importance in the war, as well as the incredible amount of destruction that went on here. We in the United States here a fair amount about the "Battle of Britain", when German warplanes were conducting bombing raids over England for what must have seemed an eternity to the English people. We don't hear (at least I don't think I ever heard) about the bombing raids conducted against Malta at more or less the same time. This air war was the second "great siege" of Malta, after the Great Siege of 1565, when the Ottoman sultan was determined to conquer Malta and destroy the Order of St John.

The bombing strikes began on June 10, 1940 (this Sunday is the anniversary) at 6:55 a.m., not quite seven hours after Italy declared war on Great Britain at midnight. For the rest of 1940, Italy conducted the air strikes alone, though in January 1941 the German Luftwaffe became part of the attacks. The greatest intensity of the strikes continued through 1942 and sharply dropped off in 1943 and 1944. The Allied Forces invaded Italy by mid-1943, which was an immense help to the Maltese, of course. During the two and a half years that the strikes continued in their greatest intensities, the air raid sirens went off more than 3000 times, something like 3 or 4 times a day for two and a half years! 1 in 200 Maltese was killed; 1 in 70 was injured. The Axis planes dropped 16,000 tons of bombs, and 35,000 buildings were damaged or destroyed. (Can you see why I needed to take notes?) You may recall a couple of photos I have posted previously which show the Grand Opera House, in ruins in Valletta. This photo (which I photographed) shows what the Opera House looked like after being bombed: 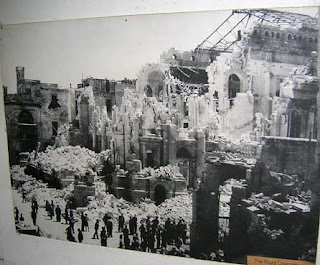 Imagine it: all of this destruction is on a small archipelago of islands which even today only has about 400,000 people. This simple placard in the museum will give an idea of the battle waged over such a tiny bit of soil in the middle of the Mediterranean: 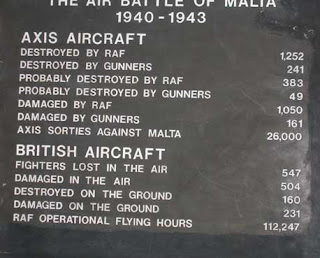 At the beginning of this phase of the war in 1940, there were only four military airplanes on Malta for its defense. Of the four, only one survives--Faith. (And yes, two of the others were named Hope and Charity.) These were Gloster Gladiator fighters (a name which may mean something to Cary Phillips, Ron McDougle and Jack Lindus!) For years Faith was preserved in "skeleton" form, but in 1974 it was given a "skin" again. As you can see in this photo, the main hall of the museum is not wide enough for the wings to be attached, so what we have here is Faith's fuselage: 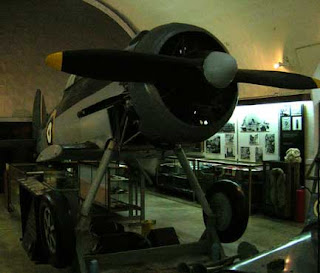 Apparently Malta's first real break against this onslaught didn't take place until the summer of 1942. Operation Pedestal involved 14 ships coming to break the siege and help the people and the military on Malta, but the ships were, of course, repeatedly attacked by bombers as they moved eastward through the Mediterranean. Only 5 of the 14 made it to harbor in Malta in August 1942. 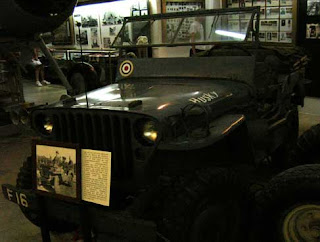 Keeping with the transportation theme, here is a camouflaged motorcycle with sidecar: 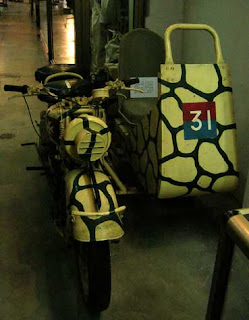 There was only one sea attack on Malta during the war, in July 1941. An Italian "light flotilla" attacked Valletta, but the Royal Malta Artillery defeated it.

This display case shows some of the uniforms in use at the time: 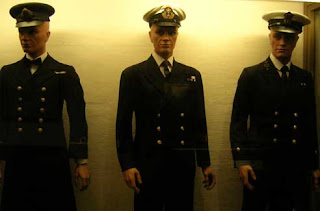 One of the unusual small items on display in the various cases is a pack of envelopes, tied together, with a piece of shrapnel stuck into them. This survives from the first day of attack and was apparently in the military supply room in one of the towns.

There are also two smaller items in the museum, which I think must be enormously pleasing to those Maltese who take an interest in history. King George of England (signed George R.I.) awarded the George Cross to the Maltese people while the war was still being waged. As you might be able to make out, the letter reads: "To honour her brave people I award the George Cross to the Island Fortress of Malta to bear witness to a heroism and devotion that will long be famous in history." The Cross itself is in the case above the letter: 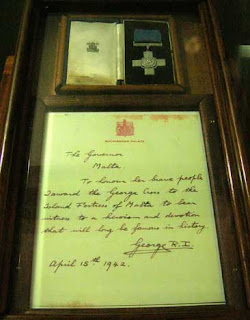 The other item, as displayed here in the museum, is an enlarged reprint of a political cartoon. Hitler, in the background, is shouting, "Haven't you two cleaned that up yet?" as an officer scrubs at Malta with a brush. The small box in front says "Blitz Powder"; the bucket with the smoking plane in it is labeled "Luftwaffe Spring Clean"; and there is an eraser labeled "Bomb Rubber" next to it. The cartoon is dated May 14th, 1942, just a month after the awarding of the George Cross, and the source is given as "Express Newspapers". 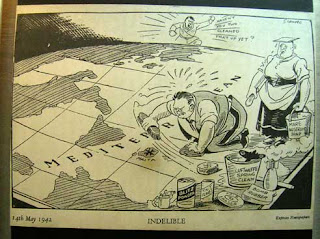 While the museum principally commemorates Malta's important role in World War II, there are a few items from the First World War as well, including this German torpedo which was fired in 1915 but did not explode. I paced it off as being somewhere between 22 and 25 feet long! 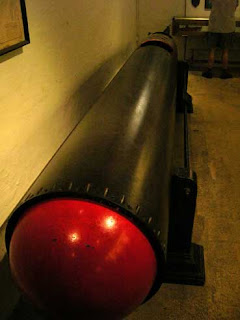 This last photo from the War Museum did not have an explanatory card with it. I suppose it is the carving of captured German soldiers on a cell-wall, giving--as it does--Germanic last names on the left and town names on the right. But I suppose it might have been done by an English-speaking jailer, since it is headed "P.O.W.", which presumes the English prisoner of war. Given the spacing, though, the POW might have been added later, so that it would not be forgotten what the list meant. 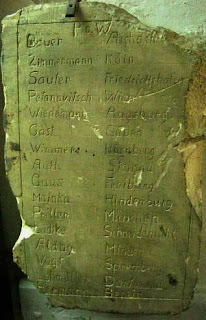 There was also an interesting map of Malta which had belonged to the Italian military. It was a relief map, three-dimensionally showing the elevations of the island. About half of the surface labeling had been worn away, leaving the upper part of the island unlabeled. It was interesting to see, on what remained, the Italian spellings of various town names, and one of them made me wonder about Marsaxlokk, the town with the fish market. While that name was printed in small letters on the map, above it was given the Italian name Marsa Scirocco. So I wonder if Marsaxlokk is a Maltese corruption of an earlier name acknowledging the African scirocco winds that Mediterranean people dread, or if perhaps the Italians had provided a sort of "sound alike" name which meant something to them, but had no meaning to the Maltese.

I know, I know--you're tired of photos of houses and flats. But here's one more: a ruined home/flat/what-have-you in the middle, with two being lived in right on each side of it. This photo comes from the seaward end of Valletta's peninsula, not far from Fort St. Elmo, where the War Museum is. There are a number of blocks of buildings on this end of the peninsula which need a lot of repair. 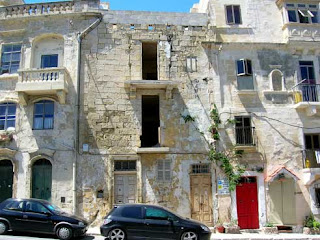 At the other end of the spectrum is this advertising placard, on Tigné Point in Sliema, for a building of flats about to go up. I'm not sure how much you can make out in the photo: the floorplan shows two living areas (one of them combined with the kitchen); four bedrooms and three bathrooms. The flats "start at" 80,000 Maltese lira, which is roughly a quarter of a million dollars. 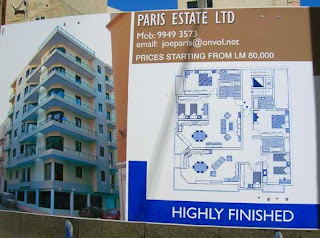 The manager (owner?) of my local coffee shop Stella's explained to me that Thursday was not Independence Day: it was a commemoration of a day in the 1920s when some Maltese were beginning to protest against British rule. During a protest on June 7th, the British fired on the protesters (the manager wasn't sure exactly why) and four protesters were killed. The parade along Republic Street in Valletta was in honor of those deaths.
Posted by Cooper Renner at 5:50 AM

Have you forgotten Google already?
From good old Wikipedia:

"The village’s name comes from marsa, which means "harbor" or "bay" in Arabic, and xlokk[1], which is the local name for the dry sirocco wind that blows from the Sahara; it is pronounced mar-sa-shlok."

Oh, but it's so much fun to speculate before Googling!

And listen up, Cooper: I for one never tire of your photographs of buildings and flats.

Yeah, I confess that I thought that "xlokk" might be in some way related to "loch" and thereby refer to a lake.

I have been meaning to say, with your recent visits to those ancient sites;
the photographs of these low walls and the beautiful sandy colors of the stone,
I am strongly reminded of the Spanish artist Joan Miro’s work and
his statement: “I would like to dynamite the last ten thousand years of art.”
The visuals you have recorded offer to some extent an explanation, well at least to me.

the British were caught between the emergent concept of social enlightenment that
was being taught by them to the peoples of the empire and the anomaly of empire itself.
Plans to dismantle the empire were under way in the 1930s and interrupted by the second world war. After the war the dismantling resumed; it was called ‘East of Suez’.
On the ground facts are always different; the people clamored for freedom and self determination and would rightly riot. the British response to the riots was to bring the army in; two ranks were formed up and they fired above the heads of the crowd
if they did not disperse ringleaders in the crowd were select and then shot in the following salvos. as you have seen on Malta the British learnt slowly not to hang insurgents as they become martyrs and not to shoot the general public who are airing a justifiable grievance and are going to be granted independence in any case.
soldiers guns and civilians are not the right social mix and do not solve the problems in societies where injustice prevails.
This came to head with bloody Sunday in northern Ireland where the antiquated strategy led to tragic outcome resulting in a total rethink of how the British army operates in occupied lands.
events as I described have never been repeated as such since that day
in some way I see similarities to the current American experience where America is caught between good intentions and dealing with the problems on the ground
and to this I have some genuine sympathy for their difficulties

To paraphrase an observation offered by Deron Bauman over at the collective blog clusterflock: "Come for Cooper's posts. Stay for Jack's comments."