The Palace Armoury and Awful Weather

Because today's weather has been so hideous (more below), it was a great day to be inside at the Grandmaster's Palace, in the Armoury. (Unfortunately, getting there wasn't so pleasant.) You may recall that I was disappointed in the State Rooms at the Grandmaster's Palace. The Armoury, on the other hand, deserves a visit. I spent at least an hour and a half there, and I didn't even listen to all of the informational "clips" on the audio tour or read all of the instructive placards. I made the mistake of coming too close to lunch time! After spending at least 45 minutes in one of the two galleries, I went and sat in the entrance hall to snack on my "morning coffee" cookies and drink some water. Thus replenished, I waded back into history.

The gallery I spent the most time in displays a great quantity of armor: helmets, cuirasses (breast- and backplates), leggings, and several full suits of armors, some of them richly engraved. One thing one learns, wandering through this gallery and listening to the audio device, is how armor changed over the centuries, sometimes for comfort and effectiveness, sometimes for style. There are the "close-helmets", which are probably the kind most Americans think of in association with armored horsemen. These helmets pretty well cover the entire head, but were, of course, hot and difficult to see out of: 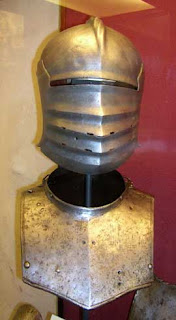 Then there are helmets that are more like the modern idea of helmets: covering the top and parts of the sides of the head, but leaving the face open. Most of us probably imagine them when we think of the Spanish conquistadores in the Americas. Many of these had "combs", or crests, on the top: a protruding ridge (sort of like a rooster's comb). Some also had small "brims" around the edges. There were other helmets, similar to these, but equipped with an attachable face-covering made of several hinged pieces which could be clipped up to protect the face, or let down for cooling or better vision. (I forget the name of these.)

Then there is the armor itself. Just inside the entrance of this gallery are two suits of chain mail, an early form of the knight's armor. Solid rings were linked with open rings which were then riveted to form the suit. I found it remarkable that the mail looks sort of like thickly corded wool! (Is that an effect of rust, perhaps?) 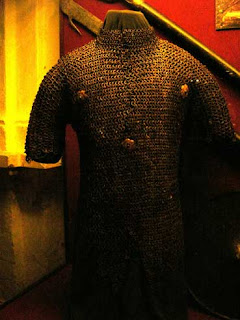 As plate-armor developed, and given that the higher ranking knights had more money at their disposal, knights began to order richly engraved armor. Unfortunately, with the low light in the galleries and the reflective glare one gets using a flash, my photos of armor mostly didn't turn out well. This is a cropping of one of them, showing a section of engraved metal. This engraving runs along the ridge that ran vertically down the center of the breastplate:

One of the mini-lectures given on the audio tour provided a great summary of the Great Siege of 1565. The Knights of St John had been a thorn in the side of the Turks for a good while, and the Turkish sultan (I believe it was Suleiman) also wanted to capture Malta as a base from which to invade Sicily and Italy. Grandmaster Jean de Vallette Parisot (after whom Valletta is named) knew that the attack was coming and summoned all the knights who were away to return. But apparently they didn't all make it: when the Turkish fleet arrived, with 40,000 soldiers, only 500 knights were on the island, supported by 8500 Maltese fighters. The siege began on May 18, and the help promised by the viceroy in Sicily didn't arrive until September 8. Up until then, the knights and the locals were on their own. Amazingly, they held off the Turkish fleet, and then, with the Italian and Spanish reinforcements, defeated it. This was the last time the Turks tried an invasion in the western Mediterranean, although their attempts to spread farther into Europe by land did not come to an end until the 18th century.

The historical information at the Armoury also notes that the first half of the 16th century was the final heyday, as it were, of armored knights, but that breastplates were still in use as late as the Napoleonic Wars. I suppose this comes as a surprise to us Americans, whose battles with the French, the "Indians" and the British were fought unarmored. I think many of us get the idea that armor went out with the arrival of flintlocks and muskets. But in fact, as the Armoury points out, a number of the breastplates on display bear the dent-marks of proof-firing, when a new suit of armor was tested by firing a gun at it, and armor-makers had to adapt to the existence of guns by adding plating to armor to make it less susceptible to piercing.

At the rear of the armor gallery is the display, intended--I suppose--to give one a sense of what it might have been like to see a unit of knights ready for action: 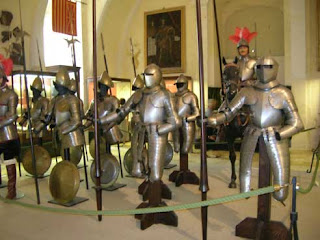 There is also in this gallery a display case featuring weapons and two suits of armor captured by the knights from the Turks. The Turkish curved sword was there, and it was interesting to see the differences in the armor styles. Unfortunately the display case was too dark for my photo to be worth using.

The other gallery at the Armoury is the weapons gallery. I suppose there must be at least two or three hundred different weapons on display here, and maybe many more. I'm not good at making those sorts of estimates. There were quite a few flintlocks and muskets, as well as a number of pistols, many of them in pairs. In their later days, the knights often carried a pair of pistols as well as flintlocks. Some of the pistols are two feet long or more! Imagine trying to aim one of them while on horseback.

Just inside the entrance to this gallery were two or three cabinets displaying cross-bows, with explanations of how they worked. Many of them had such pressure that they had to be "loaded" using a lever to pull back the cord. Once loaded, of course, they could be fired quite easily: 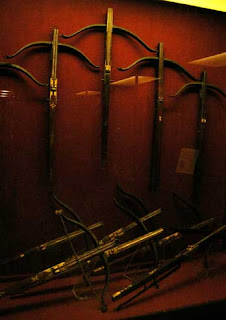 This photo shows some of the "pole-arms" of the knights: a pole-arm is a weapon put on a pole! They were inspired apparently by farm instruments in the early days. These in the photo are not made of gold, by the way; the rich tone of those arms on the right is simply an effect of my having to increase the light in the photo to make it easier to see: 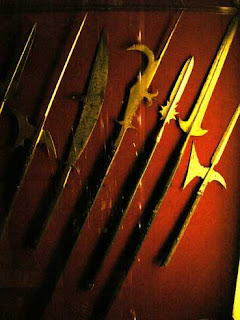 This gallery also includes quite a number of cannons, some of the small, some of them quite large. The flash, which I used with this shot, seems to have gone right up the muzzle of this one: 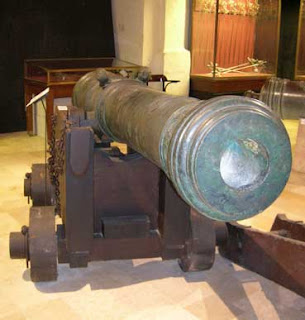 This photo, taken without flash, shows how elaborately decorated the knights' cannons could be: designed for destruction, but beautiful nonetheless: 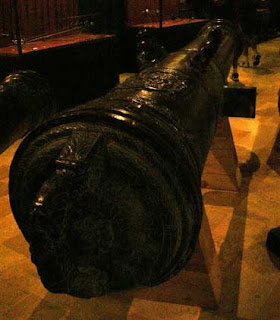 And this is a close-up of some of the engraving: 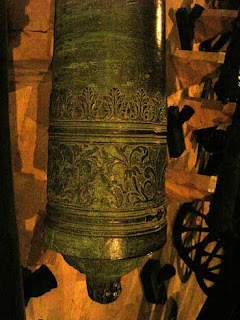 One of the cannons had two fish on it, apparently formed to be handles for the cannon to be maneuvered by, and another had (I can't remember) lions or dragons on it.

Someone whose stomach wasn't as empty as mine and who simply had a more intense interest in hand-weapons than I do could have easily spent 3 hours in the Armoury. It really is a fascinating place. Tellingly, though, even as impressive and valuable as these displays are, the walls in the galleries (which are at least 15 feet high) readily show the need of upkeep: peeling paint, stains, etc. Hopefully the surge in tourism in Malta will bring more money along for the renewal of their public places. Almost every one of the buildings I have been in, even the truly wonderful ones like the National Museum of Archaeology, need interior work. Of all the historic sites I have been to only the Hypogeum and the Roman Villa have truly first-rate structures housing the historical treasures.

Today's weather has been awful--like a mid-April day in Dallas. (Or, as one of the locals said, "It's like November." He said he had never seen rain like this in June.) The first rain started about the time I left the hotel this morning, about 10:15. By the time I got to Valletta and entered the Armoury at the Grandmaster's Palace a little after 11, it was still raining, light and steady. By the time I left the Armoury about 12:45, the rain had actually stopped, but started up again, much more intensely, including thunder and lightning, at 1:45 and didn't stop until almost 4. Coming home from Valletta about 2:45, I was for the second day in a row in a bus driving through curb to curb water, but this time the water was moving, and the rain was still coming down. There were blocks' worth of standing or flowing water. Around 5 or so, the third rain came, and the fourth about 7:30. No evening walk today. And my poor "Malta hat" may never be the same: for one thing, the liner in the crest of the hat (scalp protection!) has come almost completely unglued. Straw just wasn't made for weather like this.

The waves are crashing and roaring; the water level on the beach is up several feet; and no one was tanning today.
Posted by Cooper Renner at 6:34 AM

I repeat. You should publish this travel log. It is awesome! I have to believe that there is a company out there that would pay you to travel and write for them.

I want to know how many megapixels yer carryin' pardner. Seriously, your pictures are much better than the shite I took in Alaska. It can't be the photographer, so what kind of camera are you using?