Scenes from a fish market, and other tales

The Fish Market at Marsaxlokk

The famous fish market, at Marsaxlokk on the south coast, takes place on Sunday mornings and is only a small part of the market overall, which also includes fresh produce, handmade Maltese lace, typical flea market sorts of things (clothing, sunscreen and other sundries, collectibles), and even a couple of guys selling CDs of Maltese folk music. (Does every folk music in the world use the accordion?) The market is crowded with both tourists and locals--when I got on the bus to leave Marsaxlokk for Valletta, a number of folks got on with bags full of purchases.

Marsaxlokk, by the way, is pronounced something like mahr-sah-SHLOAK and is abbreviated on signs M'Xlokk. Xlokk may mean something, as there is also a town called Marsa. There were some nice-looking houses in Marsaxlokk, and we passed through a bit of countryside on the way there, though most of the route took us through town after town. Quite near Marsaxlokk is what appears to be a winery called Marsovin.

Some of you may may adore freshly caught fish; some of you may not. I suspect my brother-in-law Richard, my nephew Ross, and my nephew-in-law Randy would have loved to have been here. 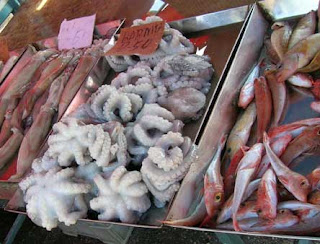 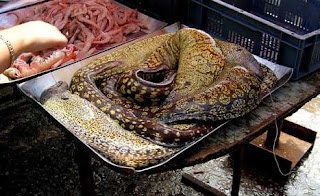 Big fillets, no? And as far as I can tell, that's a head in the rear left of the photo. I was told by two different men at the hotel (the cook and the Maltese-Australian guy) that these were probably swordfish fillets: 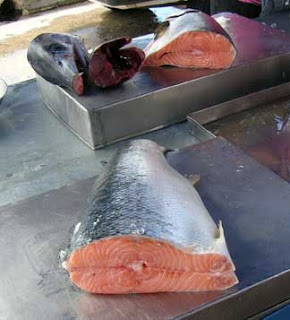 I call these "ugly fish": 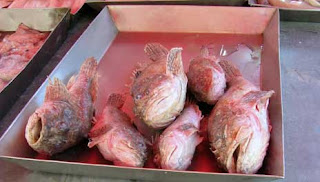 And this sleek fellow looks almost like a small shark, doesn't he? 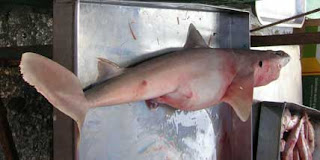 I didn't get as many good photographs of boats as I had hoped to. Some of the Maltese fishermen still paint their boats in traditional ways, some of which may eventually go back to the Phoenicians--the eyes on the prows, for example.

This one was up on the dock, making it easy to photograph. The brightly colored hulls are characteristic, and many--like this one--are wooden: 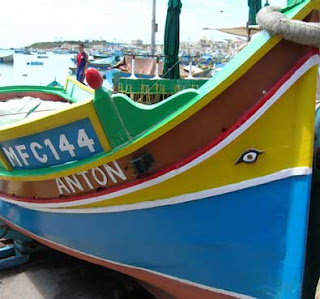 This one has horseshoes on the prow. I don't know if that's the name of the boat, or perhaps the fisherman's hometown, painted just below and to the right of the boat's number: Tal-Karmnu. I have gotten the impression from various signs and placards that tal means of or of the, but of course it's possible that there's more than one meaning for the word:

This shot looks out into the harbor a block or so south of the fish market and just about at the end of the rest of the market. 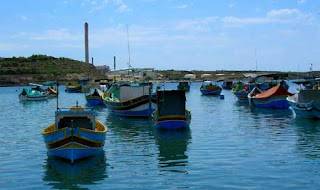 You can see there aren't slips for boats; they're just sort of parked in the water. I assume they use smaller boats to row to shore from their "parking spaces". I noticed this same set-up in St Julian's (San Giljan in Maltese) although there it seemed more out of place. St Julian's, quite a tourist hotspot, is completely urbanized, and so it felt sloppy to me to have boats anchored all over the place, with their spots marked by floating plastic bottles.

I took this photo in Marsaxlokk too, though it's another type of transportation. This pickup belonged to one of the men selling fresh produce. In case you can't make out the logo, this is a Land Rover pickup, from the mid-'60s maybe? 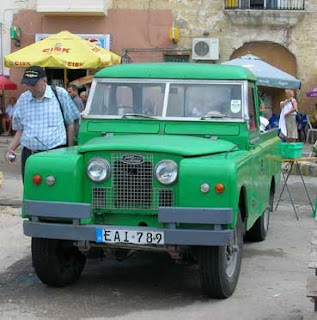 And this photo does not come from Marsaxlokk, but while we're on the subject of transportation, why not slide it in? I snapped this while taking a long walk home from Valletta this afternoon. I think I may have been in the town called Gzira. It looks to be about 40 or so years old as well, but it's either a Morris or an Austin pickup. (And I think those two may be the same company anyway.) 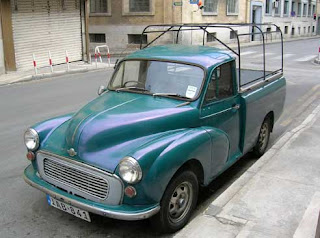 Here are a few neighborhood scenes. First I have two photos, both of which come from the town called Pietá, I think. (Sometimes I'm not at all sure which town I'm in.) These may give a much sharper idea than some of the earlier photos of how a maintained house or building will abut one in much worse shape. In this first one you may be able to read the sign in the building on the left--for sale or to let. Apparently this building has been recently redone and is set up for multiple residences or businesses. The building on the right, to say the least, needs work. 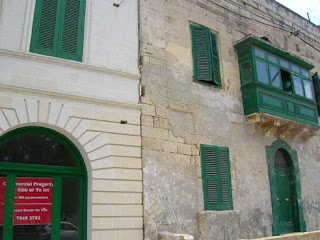 In this second photo, both buildings seem to be individual houses. The one on the right is in much better shape, though close up one can tell that it's probably been a while since the white paint job (especially on the balcony) was done. But the difference in their condition is still striking. 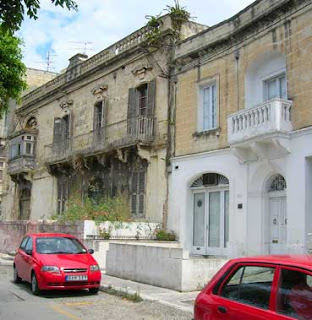 I took this photo simply because the name of the store amuses me. How could you resist shopping here? (When it's open of course.) 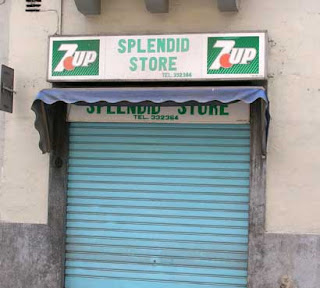 The streak continues! While last night I was able to sleep well (with ear plugs of course), and the shouters to the right were still on fairly good behavior, I seem to have new neighbors to the left. And they, true to form, came in just a while ago (about 8:30, say) and turned up their television so loud that it's rattling out their door into the hall and through my door. I can't imagine what circumstances would require such volume on such a tiny television set. Perhaps they are sitting on the balcony with the door closed and still want to hear the television! I'm really tired of tourists who can't behave like anyone else lives in the world. (Note: I finally went down to the front desk and asked the man on duty to call the room. He did, and the folks turned the TV down.)
Posted by Cooper Renner at 7:24 AM

Looks like monkfish (ugly) and tuna (orangy) to me.

Hey, what about all those dead migrants they found floating around in your part of the world yesterday? I'd lay off the fish for a little while...

I've had octopus and squid in Russia. I'll try eel! Seriously Cooper, I think you need Ms. Cortez to take care of all of these loud mouths!

Doubtless I am alone in my astonishment that most travelers continue to desire (or expect, or require) televisions in their rooms.

Of course, that anyone could tolerate television anywhere, anytime just plumb conflibberates me.

TV-free lodgings are my idea of Deluxe Accomodations. A TV-free world is my idea of Paradise.

I suspect that hostels/hotels/etc. without TV in the rooms would be a lot quieter, yes? Folks who want to watch TV can go to the TV room. (That said, I admit that I turn the TV on here in the evening, just to have a little bit of something going on over in the corner while I work on the Travel Log or read Thomas Hardy. Sometimes I pay a bit of attention for a minute or two to one of the game shows they have here, and I realize that even though I can't "hear" Italian, I can pick out the words on the screen.)

I love tv and I don't care who knows it! And I love watching Italian television, etc. In Bulgaria I watched a German version of Judge Judy that was hilarious, very SS.