The Victoria and Albert Museum, to the south of Kensington Gardens, is across the street from the Natural History Museum and the Science Museum and just down the road from the Royal Geographic Society. Today I made it only to the V&A, but maybe I'll make one or another of the others at some point.

The V&A is both an art museum and a museum about how arts and crafts get done. Finished (and sometimes unfinished) works are on display, to be sure, but they are categorized by the materials they are made of, giving the visitor a chance to compare how various artists of various times have worked in the same materials. The museum also has a large collection of plaster casts of famous art from many countries, including copies of such works as Michelangelo's David and Moses and even such large architectural works as part of the front of the church at Santiago de Compostela in Spain and the enormous column Roman emperor Trajan, so large the cast is in two pieces, the lower half and the bottom half--the whole thing together won't fit inside the museum!

The first gallery I wandered into was the sculpture gallery. The museum has quite a collection of bronzes by Rodin, most famous for The Thinker (one copy of which is in St Paul de Vence in France--I blogged it earlier). They also have work by the British artist Eric Gill who, in addition to being a sculptor, designed alphabets. This plaque features only upper case letters, and the numbers 1-9: aren't they beautiful? 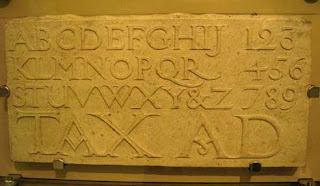 The sculpture gallery also contains large pieces by two different artists on the theme of Samson smiting Philistines with the jawbone of an ass. This is one of them: 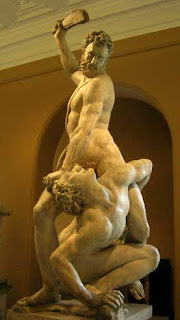 Do you think Samson's hair ought to be longer?

The gallery also includes funerary art, such as this short poem carved into one end of a large box (for a crypt or mausoleum?): 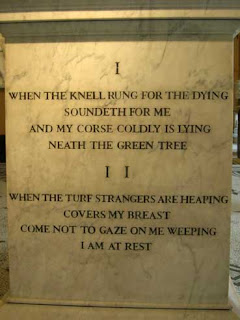 The sculpture gallery overlooks a courtyard where the museum has a cafe with snacks and drinks. I was carrying a can of tuna and an apple with me, so I went out, bought a cup of tea and a muffin, and sat down for an early lunch. Before I finished it began to sprinkle, and there was a pretty good rain shower while I was in the museum.

Apparently the V&A gets lots of school visits--or maybe it's just that time of the English school year. A large group of what seemed to be high school students came noisily through while I was in the sculpture gallery, and a couple of hours later, when I was leaving, a really large group of elementary students were lined up with their teachers in the foyer. One of the museum employees was sitting at his desk there with his fingers in his ears. I probably should have told him, "I know the feeling!"

Upstairs there is another section of small sculptures, grouped by material into different cabinets. Some of these small sculptures displayed incredible detail in their carving, and some of them were worked in ivory! This section of the museum is an elevated walkway, overlooking the two large rooms where the casts are kept below, and there are also materials here which you are invited to touch. This little owl, not quite a foot high, and a bit over 150 years old, is for touching, so that visitors can experience what the marble feels like: 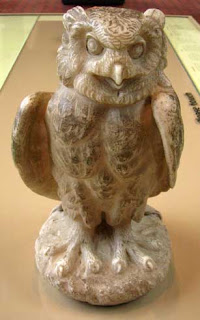 There is also a rather heavy, but even smaller, bronze horse for touching, and one of the display cases has a silent film, with captions, showing how the "lost-wax" process for creating bronze sculpture works. It was quite fascinating and looks rather complicated.

Much of the art at the V&A is "practical" art--what we call crafts or even tools. There is a really cool gallery of musical instruments, many from the 1600s and 1700s, and including instruments I had never heard of, such as the theorbo. They have several hurdy-gurdies there: 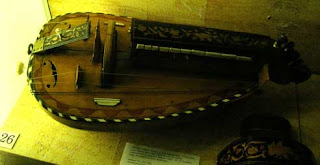 I have wanted a hurdy-gurdy ever since seeing part of Captains Courageous several years ago. In the movie Spencer Tracy plays a hurdy-gurdy and sings along. I like the sound very much, but they are not inexpensive. Maybe learning to play the hurdy-gurdy will be one of my "achievements" in retirement.

Here is a photo of an entire case of string instruments, especially for my finger-picking friends Dave Larsen and Greg Whitfield and those great fans of heavy metal Esther Arriola and Monica Nicolai! 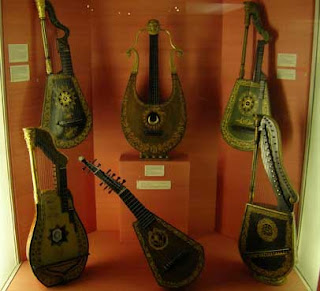 Another of my favorite areas was 19th century painting. The museum has work by William Blake, Dante Gabriel Rossetti, John Constable, JMW Turner and--a personal favorite--Edward Burne-Jones. This Burne-Jones work is quite large and hangs in a stairwell. I took the photo from the side, trying to get it into the best light. It is called The Car of Love and perhaps represents how love controls or snares both men and women. 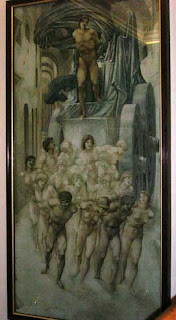 This one is by Rossetti. Doesn't she have a languid, dreamy look on her face? Some of the Pre-Raphaelite painters seem to specialize in that other-worldly gaze, a much different expression than the trapped or tormented look which one often sees in Burne-Jones's subjects, even though he and Rossetti were associates. 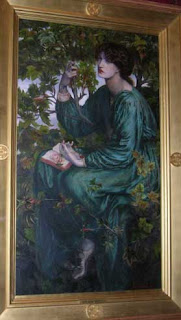 This "cartoon", also from the second half of the 19th century, also by an English artist (Leighton?), is a working version of the finished painting, done for the museum. This draft was rolled up in two pieces (see that line across the top third or so of the painting) and forgotten about for 100 years before it was rediscovered. 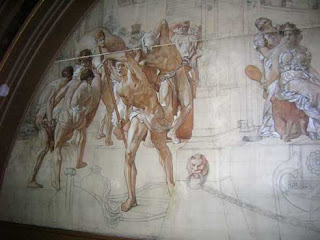 The photo above shows only about the left quarter of the full work. The entire title is something like "The Arts of Prosperity In a Time of Peace". Its companion deals with the time of war, and the preparatory cartoon for it was presumed lost. X-rays revealed, however, that the war cartoon is underneath this one, which is painted on top of it!

The photos I've posted here give no idea of the breadth of the collection at the V&A and there is much to see which I either didn't get to at all or just sort of walked past and glanced at. One's eyes sort of fill up after a while. There is a gallery of ironwork, for example: iron-fences, wooden window shutters with iron hinges and bindings, and so forth. There is an entire gallery of work done in silver! The place is enormous.

After a second lunch--we hobbits eat frequently--I walked back down to the Oxford Street area to check out two stores I had stumbled across yesterday (actually about a block off Oxford Street). One is an independent bookstore which specializes in non-English language materials: literature as well as reference and teaching materials. So of course I had to browse the Spanish for a while. Prices seemed high to me, as most prices in the UK do. I found one book which looks quite interesting, however, and checked for it later on the bn.com website to see if it was readily available in the US. It doesn't seem to be--so I may have to buy it before I leave London: Parménides by César Aira of Argentina.

The record/CD store turned out to be almost entirely classical, which I was not expecting. I browsed a little bit and heard an interesting new CD which the shopkeeper was playing, but he didn't seem to have another copy of it on sale, so maybe it is something else I will look for later.

On the same street with both of these shops was this mural, painted on one end of a building: 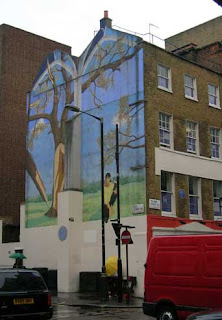 Was it still raining? Yes. Did it ever stop. Yes. After I walked back to the hotel, had my early supper, rested a bit, loaded up the laptop to go to Starbuck's for wifi, and walked almost all the way to Starbuck's. In the last block or so, bits of blue sky began to be apparent, and while I worked at Starbuck's a big chunk of the sky actually cleared. I actually walked back to the hotel from Starbuck's without needing the umbrella above my head. Can I hope for more of that tomorrow? Who knows? In parts of England it's been flooding. Let's hope that doesn't happen in London!
Posted by Cooper Renner at 9:04 AM

Just a reminder that the Tate has the best collection of Pre-Raphaelites and Turners. Blakes too!

Did you notice the Rodin Burgers of Calais outside the Houses of Parliament? (on the Thames side).

I went to Tate Britain today and saw that good stuff. You bet.

AND I stumbled across the Burgers of Calais without knowing they were there. Maybe I'll get a photo of them posted tomorrow. Couldn't take photos in the Tate.

Hi Cooper, Looks like you are having loads of fun! Hope the ankle is better! I got Susan to the airport today--her flight out of SA was delayed a couple hours. Have a great tour--can't wait for all the details. Karen