Woke up to clouds and a cool wind this morning. (Actually of course I didn't wake up to a cool wind since I wasn't sleeping outside…) The sun came back as the day wore on, and the wind stiffened. I'd guess it was at 25 mph, maybe more, anywhere a building wasn't blocking it. I took this photo at Sliema, which maybe gives a bit of an idea of how choppy the water was, even inside the harbor. 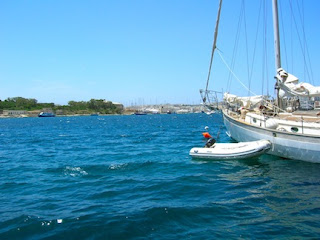 I went over to Sliema because it was time to visit Books Plus, as I'd finished Wilkie Collins' Hide and Seek last night; because I wanted to stop in at the supermarket and get some foodstuffs not easily available in Valletta; and because I thought I might even have a baked potato at one of the cafes I visited on my last trip. At the bookstore, I finally selected The Virgin & the Gypsy and Other Stories by DH Lawrence, whom I haven't much read. My baked potato run was a bust because the cafe is gone: the building it was in is under renovation. I also couldn't spot the kiosk on the seawall that I used to frequent but couldn't tell, because of construction, if it was gone entirely or being upgraded. Got several things at Tower Supermarket (which I've been using since my first trip here) including some sliced turkey for a quick lunch and (get ready to laugh) a jar of pureed carrots and potatoes (i.e. baby food!) The puree wasn't exactly tasty, but I figure it can take the place of an apple for today.

I also visited the ritzy new shopping mail at Tigne Point, called (quite original) The Point Shopping Mall. Tigne has been undergoing reconstruction and renovation since before I first came to Malta in 2007. The mall is quite nice and glitzy, four levels around an open atrium, not enormous but far and away the largest shopping center I've seen in Malta. It even has a Debenhams (from the UK) and things like Nine West. Cinnabon is there too--Cinnabon seems to be everywhere now. There's also a supermarket there called Chain, which I'm guessing comes from Italy, based on the signage inside.

This photo was also taken along the waterfront in Sliema of a young man doing a chin-up on a metal pipe of some sort right by the water. 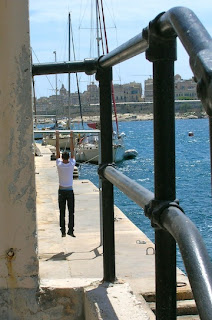 After a quick stop back at the hotel to drop things off and have a bit of post-lunch snack, I took the bus out to Ta 'Qali, the crafts village. I wanted to have a look at some decorative glass there, but also to visit the American Embassy and see if they could help me with my passport issue. This was my first visit to the new Embassy out there. It's quite a secure little compound with all sorts of guarded doors, metal detectors, and inspection wands. They weren't able to do anything, but one of the people I talked to told me the exit stamp from Fiumicino Airport should do the trick and keep me from having to go through the rigamarole of being part of yet another complaint against the Italian authorities for being so lax. I hope so.

Back in the village itself I found a couple of small silver objects which I will not detail further as they will be part of a birthday gift for someone who's probably going to read this, and also had a muffin and a cup of tea before getting back on the bus. The wind was really stiff and chilly coming out of the north or northwest as I waited at the bus stop.

Back in Valletta, I visited my old friends at the Hollywood Confectionary, whom I've been shopping with since 2007. Ham, potato sticks, and Perrier this time. They estimated they've visited London four times since I was here 2 years ago, and also Venice. The grocery business must be good! I also mentioned possibly going to St John's Co-Cathedral tomorrow, and the owner suggested I go to mass one day instead of paying to visit during the week!

I keep forgetting to mention the issue of the Lascaris War Rooms, a historic site I haven't visited on either of my previous trips. I mention this because one is likely to see a sign pointing to the war rooms from virtually anywhere in Valletta and the signs certainly don't seem to point in the same direction. According to my map, they are on the Grand Harbour near the southwest corner of the Valletta walls, and I'm thinking I've seen the entrance at least once, without ever going in.

I've also forgotten to mention two couples I met on Saturday, both of whom had been on the Crown Princess. One couple rode just behind me on the bus to the airport. They are both retired school teachers from New Jersey--the husband a band-director, the wife an elementary teacher. NJ must pay its teachers better than TX because they have been to every continent except Antarctica and South America, and they were flying out of Rome to Istanbul on Saturday to spend a few days there before getting on a much smaller ship--90 passengers with 80 crew members (!)--to spend several days sailing around the Greek islands and spending nights ashore at various locations. Sounds amazing.

The other couple I didn't see until we were waiting for our luggage at the Malta airport. Yes, I wasn't the only person from the ship flying to Malta. They retired from Britain to Malta five years ago and are living on one of the floors of a hotel in Sliema overlooking the harbor. The husband said they bought "the floor" and finished it out, but the floors of that hotel look so large from the street that I'm thinking surely they can't have bought the whole floor, but merely a section of it. But what do I know? I also talked a bit on the bus to a woman from England whose husband is Maltese, and she said they have been living on the island now for 18 years. Apparently he was in the UK for about 25 or 30 years before that. She said it's get a little claustrophobic here sometimes, a kind of "It's Sunday again; what will we do this time?" I can imagine that's true since the island is so small.
Posted by Cooper Renner at 9:57 AM