Finally today I made it to the Msida Bastion Historic Garden (not plural after all), just down the road from the hotel. What a lovely place it is. Since it only began its life as a burial ground in 1806, under the British rule, I suppose that for the Knights of St John the area was simply a level space on the defensive walls. It apparently sustained at least one direct hit during World War II and was in terrible shape, a true chaos, when concerned folks began restoring it and beautifying it as a garden 20-odd years ago. The work is in progress, as I could see by the partial completion of a walkway along the parapet (is that the right word?) overlooking the water, near which limestone paving stones were neatly stacked.

The elderly woman who met me at the door is one of the volunteers who operates the garden, and not long after I began to roam the place, I saw her with another elderly woman, both of them there to work, I gathered. I saw plants in pots at one point, waiting to be put into the ground. Although it was officially full in 1856, there is a new tombstone for a young man who died in 1857, and there are some more recent cremation burials on the grounds. Much of the space itself is open grass, and there are many broken tombstones lined up against the various walls, so I can only assume that the cemetery was in such battered shape that they may not know where some of the stones belong! Or perhaps they're only awaiting their time to be restored to place. Here's a view from the cemetery, looking more or less north to Marsamxett Harbour and (I think) Manoel Island. 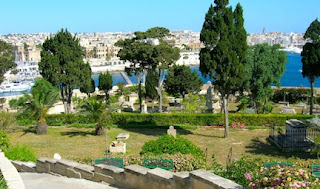 And here's a look confined to the cemetery itself. 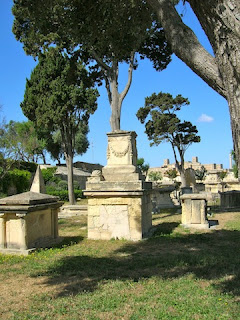 It really is one of the loveliest gardens I've seen in Malta and deserves to be more widely known. I would not have known of it if I hadn't seen the sign right near the hotel entrance, and as I left, I spoke to a woman coming in who said that she is Maltese and lives in Valletta and yet never knew of it until a local television channel did a piece on it just this week. This interesting tomb is of a man who died in 1826, but the plaque at the very base of his tomb was added in 2003 by a prefectory of the Knights Templar named in his honor. I don't know what kind of claim current Templars make to the historic order, officially disbanded in the 14th century. 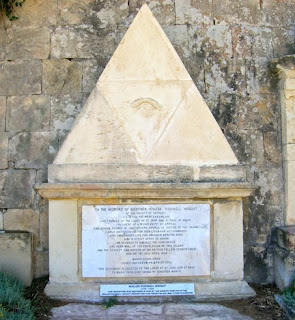 And this tombstone, in German, is from the 1840s. It reads, as well as I can make out, that Friedrich Schuettenhelm lies here far from the fatherland and from his (something) elders and sisters, and that everyone who loved him bids him an early goodbye. (Something like that, anyway?) 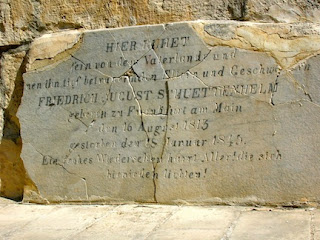 Another interesting tomb is of a man named John Tombs, and yet another commemorates a soldier who survived the Siege of Sebastopol and three other sieges, being dangerously wounded in the last of the four, but who drowned while bathing near Ft Ricasoli here in Malta.

It is a remarkable place, well worth the visit.

This photo shows a partially wrecked fishing boat which is mounted on the hotel grounds. See the guardian eyes on the prow! 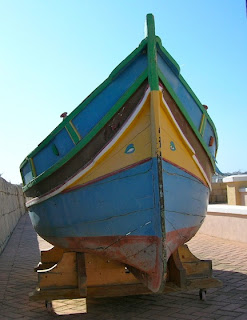 I also did some shopping today, buying an early birthday present for one sister, not finding the right scarf (or something similar) for another sister, and serving as the middleman by buying a small piece of glass sculpture for another sister. I also found some Maltese bus toys which my two youngest nephews will be glad to see at Christmas time.

Amount of sunshine: Very good indeed
Temperatures: Perfectly acceptable
Wind: Absolutely dreadful. Today may be the worst day so far, but the caretaker at the cemetery told me it is supposed to die down for a few days before roaring back. I hope it dies down soon. She also told me that before this latest bout of wind had started there had been two beautiful weeks, so I may have caught the very tail end of that nice spell last weekend.
Posted by Cooper Renner at 6:38 AM