Today started off with beautiful sunshine, and a bit of chill wind, but is now mostly cloudy. In a few hours it may change again. Who knows?

I visited Marks & Spencer's cafe for the first time today and had a cup of tea and an iced pink donut while reading from DH Lawrence and browsing the local newspaper. There is a small tide of Libyan refugees still coming into the country because of the unsettled conditions there. May's total so far is about 250.

After morning tea, I went up to the Hastings Gardens, on the sort of northeast corner of the city, and had a can of tuna and an apple before doing some drawing. There is a monument here--undated but I don't remember it from before--from the Armenian-Maltese community to the Maltese people at large, thanking them for taking in Armenian refugees in 1375 (!) and 1915. Here's my not-terribly-to-scale drawing of it. 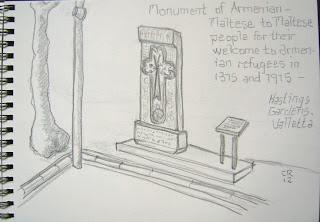 I also took a couple of photos here, looking northwest from the walls toward Marsamxett Harbour. In this one you can see how incredibly high the walls are here, and how they sort of loop in on themselves in spots like this. Imagine that I'm standing at a kind of dead end with the walls right in front of me and going out from me on both sides. You can see the blue of the harbor water, some boats in the marina, and the crowded urban areas just across from Valletta. Those high-rises in the distance are maybe Gzira, but I couldn't say for sure. to the right of the photo back there would be Sliema where I stayed on my first trip here. 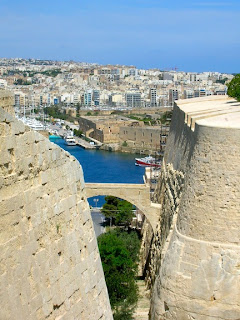 At 12:30 there was a performance in the Oratory of St Francis on Republic Street, so I went to that for 5 euros. It featured a Maltese soprano Marita Bezzina and a Maltese pianist Ramona Zammit Formosa. It may be that I have heard Formosa before at St Catherine's or St James Cavalier, but I'm not positive. Both of them have performed in many countries and both have studied in Malta and elsewhere. Today's program included Schubert's "Ave Maria" as well as the one by Mascagni, which apparently comes from the opera Cavallieri Rusticana (or something like that) because the tune is quite familiar. Perhaps the melody also serves in the overture. They also performed "O Mio Bambino Caro", "Panis Angelicus" and (piano only) the theme from Brother Sun, Sister Moon, written by Donovan of "Sunshine Superman" fame. During one of the songs Bezzina hit and held a note so long and high, in a room relatively small, that I almost expected the two windows to shatter. It was quite impressive. There were piano only interludes three times during the show, giving the soprano a chance to rest her voice, I presume. Here's the drawing I worked in while listening, and then touched up a bit while sitting on a bench outside St John's Co-Cathedral. 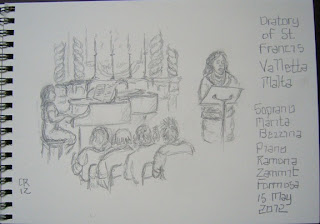 Walking down the street in Malta, one can hear quite a few languages, but one mostly hears Maltese. I'm not a statistician, to be sure, but my experience tells me that the Maltese language is in no danger of dying out. And perhaps because the Maltese spend a lot of time outside and have to compete with ambient noise, or perhaps simply because the so-called Mediterranean character is more expressive than the American, the language "feels" very vociferous and full of emotion, somewhat in the same way that people say that German feels harsh. One of these days one of you will have to decide to visit, and hire me on as your tour guide!
Posted by Cooper Renner at 6:12 AM