I took two long walks today, from Floriana to Sliema, and from Sliema back to Floriana. Yesterday I had thought I might go back to the Tarxien Temples today, but when I got up to cloud cover and roaring wind, I changed my wind. At least, I thought, if I were walking to Sliema I could catch the next bus if it started to rain. As it turned out, though, the clouds were thinning to haze by about 9 and later we actually had true sunlight some of the time: along with 25-30 mph winds, of course.

I stopped off at Ta Braxia Cemetery on the morning walk and one of the workmen there unlocked the cemetery church for me to look at. It's quite a lovely small building, reminiscent of St Catherine's Church in Valletta, small and roundish. Then he recommended that I stop off at the cemetery just a couple of blocks away and gave me directions. So I felt that I ought to do so, but first, on walking out the lower gate at Ta Braxia, I caught a glimpse of a young but quite wide-eyed kitten and stopped to look, then was startled almost into a jump when a full-grown cat (the kitten's mother?) sped off right in front of me. I can't decide if Lou Ann would be pleased that Malta is so tolerant of its feral cat population, or disgusted that the population is not dealt with in some way.

Anyway, I went on my way to what turned out to be the Pieta Military Cemetery, right next to a children's playground. Though not completely full, it is very nearly so. I kept thinking "a forest of tombstones". 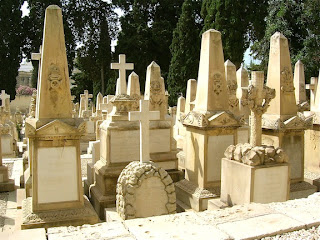 In that section of the cemetery, some of the standing stones are right next to each other, which may not be apparent from the photo: there is no way there is six feet between headstones. So I wondered: Do they bury the dead on top of one another, or standing up? I don't know the answer to that question, but it comes up again in the "flat" part of the cemetery where a space roughly 3 by 6 feet will have three to six markers on it. I'm including this photo because the deceased here are Maltese, rather than Englishmen (or New Zealanders!) who died while serving in Malta. 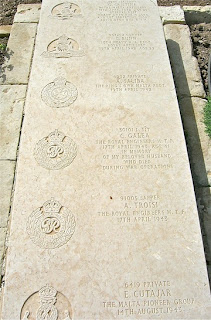 You might be able to read the names Cutajar and Galea.

After leaving the cemetery, I continued my walk and passed through a small park alongside the Msida Marina. I noticed here a bust I'm sure I'd seen before but not given much attention to. But not long ago I read a novel, the name of which escapes me, which featured this very man as a character: Professor Zamenhof, the inventor of Esperanto. I doubt you can make out the inscription, but it's in Maltese. 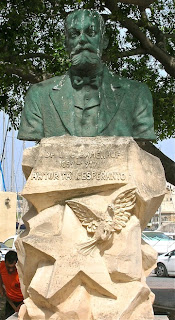 After a while I made it into Gzira, where you find Samuel Taylor Coleridge Street (Triq), only one block long. I was a little irritated to find that at one end of the street, the sign is partially obscured by a convex traffic mirror. Mind you, the Maltese blind corners need these mirrors, but couldn't they have mounted it six inches higher and allowed Coleridge his full respect? 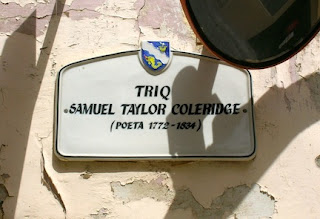 I finally made it to The Point Mall about 10:30 or 10:45, ready to visit Marks & Spencer's Simply Food and have a croissant--a PLAIN croissant without cream. I also had an iced pink donut and a cup of tea. I read a chapter of Titus Awakes while enjoying my late morning snack--my two cups of oatmeal had long since worn off. I browsed the bookstore a little bit, just for old times' sake, and noticed a series of tiny books I hadn't noticed last week: they're a new format called Flipbooks, or Flip-something. They're only about half the size of a mass-market paperback, but they're printed sideways, as it were: you open them with the spine horizontally in the middle instead of vertically. The paper is very similar to Bible paper, so that you can have a decent print-size, bigger than many paperbacks, and still have a fairly thin book, and one whose pages lie flat as you read. Of course there is the problem of "see-through" like you have often with Bibles, but the bright white of the page somewhat offsets that nuisance. It's certainly a great size for travelers (or folks who live in RVs), but there don't seem to be very many of them yet. Maybe I'll see more in the UK, which is where they are coming from.

By this time I was ready for lunch, so I headed off to Tower Supermarket and got some ham, potato sticks, sparkling water and a Red Delicious apple. The ham packet was close to 10 ounces, way more than I wanted to eat, but it was the smallest one I could find, so I took it. I had about half of it, along with the potato sticks while sitting on a bench in the shade, with the wind somewhat blocked by the buildings. Even so, the outdoor signs at the store behind me kept blowing over in the gusts, until the sales girl gave up on them.

I had intended to take the ferry back to Valletta, but the sign said CANCELLED when I reached the "depot." I wondered if the wind was too high, or if there is something wrong with the boat itself, since last week they put us on a water taxi instead. I didn't want to get on the bus, so I walked back to Floriana, which hadn't been my original plan. One way in a day is enough. But it was fine. I stopped in Msida, harborside, and ate the apple I hadn't eaten yet and rested my feet. What is probably most amazing about these two walks is that I was actually able, for most of the time, to remove my windbreaker! Now don't go thinking we were having an actual warm day in Malta, because we weren't. It was just at the edge of too cool or almost warm, but with all my walking I was warm enough to take it off. Amazing. I'm sure they've been stripped down to the skivvies all day in London and Berlin, and it's just barely warm enough here for me to get out of my windbreaker!

I stopped off at the hotel and got rid of the second windbreaker and umbrella, both of which I had taken with me when I left this morning, had a sip of cold Coca-Cola, which I bought yesterday evening and stuck in the refrigerator, then headed into Valletta for afternoon tea at Marks & Spencer's cafe, a little sitting and staring at the clouds, and then chips and more tea at Cafe Deux Baronnes, while drawing another not-quite-perspectively-correct drawing based on Ft San Angelo, across the harbor from the cafe.

Rest in peace, Robin Gibb! (Of the Bee Gees)
Posted by Cooper Renner at 9:10 AM

A lot of European cities do take care of feral dogs and cats. In Bulgaria they catch them, neuter them and tag them (a tag on the ear), and then let them go. We do that here in Denton (The UNT Feral Cat Association).

I do see a lot of cats in those old cemeteries too. Saw an old lady feeding spaghetti to some in Rome.