Two weeks ago I arrived in Malta (for what was probably the best weather day there); two weeks before that, Debbie and I got onto the ship on a warm, damp Florida afternoon. Three days from now, I fly back to the States on a Tuesday that will last 30 hours!

Well, as for the Dickens Museum, here's the photo: 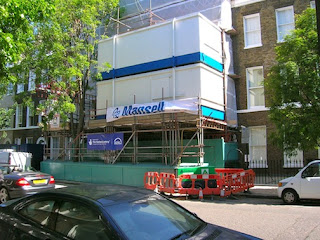 I spent an hour and a half getting there, about an hour walking, about thirty minutes having morning tea. And I arrived to find that it had closed 6 weeks ago for an eight month revamping. Sigh. So much for Dickens.

But since it is in the general area (actually a bit farther east) of the British Museum, I decided to swing back through there. It was busy on a Saturday morning, even though the weather was lovely outside. I got one of the portable stools they have scattered around the building and used it to sit and draw in a couple of places. The first spot I sat to draw at was in front of a case with some ancient Mesopotamian boundary markers in it, as well as a small tablet commemorating a king giving some land to a guy (with the exact same name--Nabu-apla-iddina!) It was the tablet I wanted to draw because it's sort of pretty. While I was there, an older man leading a group came by twice, the first time to point out the boundary stones (and the importance of property? I wasn't really paying attention), the second time to use the map to one side of the case. In both cases, his concern was in talking about the migrations of Abraham and Sarah, and one of the remarkable things about his discussion was that he gave an exact year--either 1511 or 1513 BC, if I remember right--for the Exodus of the Israelites from Egypt, and then from that factored in the exact year Abraham came to Canaan or something similar. Most scholars, I'm sure, would disagree with that early date for the Exodus, but this man seemed very certain of his dating.

After finishing up my drawing of the two Nabus, I moved on to another Mesopotamian case which has the original surviving pieces of a 4500 year old harp along with a reconstruction of what the harp probably looked like, based on the pieces themselves as well as ancient depictions of harps. I sat a while and drew my version of that harp on the same page as the Nabus, so here you go: 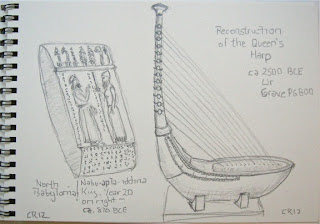 There was also a really cool exhibit of Picasso pen-and-ink drawings (and etchings?), some featuring the Minotaur. Most of them had great simple lines, though others were much "busier", with the sensation of motion and activity. Sometimes the drawings had some of the distortion or dislocation one associates with Picasso's paintings, but most of them were fairly straightforward and very very good, often of a sculptor and his sculptures.

After I left the museum, I had a jacket potato (baked potato) at a little place which I think Susan and I visited in 2007. I believe it's called the Bloomsbury Deli. Then I moseyed on to Charing Cross, the famous "book" street, to browse for books. I visited a couple of used bookstore and didn't find anything I particularly had in mind, though I stumbled across a 40-plus year old copy of a paperback in the series called Penguin Modern Poets, each of which featured 30 pages or so by each of three different poets. I bought this one--at 3 pounds 50 cents--because one of the three poets is Geoffrey Hill, whose work I've been interested in in the past, and because I think some of the poems in here didn't make it into his official books. (I could be wrong…)

I also visited Blackwells, a new bookstore, and Foyle's, which is always crowing about being voted the best bookstore in the UK, and I suppose it deserves it. It is a massive store, with zillions of books. I found several interesting things in both stores, but bought only one book, from Foyle's, a 1990 edition of 4 long stories by a 19th century German writer named Adalbert Stifter whom I haven't read, but feel like I should. I hope it's good! I found out, while in Blackwells, that there is a new American (!) edition of the Scottish poet Ian Hamilton Finlay, but I didn't see the need to buy it as an American import to the UK when I can just get it at the US price when I get back. Weird, though, that this American edition is what both Blackwells and Foyle's had on the shelf.

I had an early supper at Marks & Spencer, and the young woman who rang me up there was the one who'd been there when I was in on either Thursday or yesterday, and she remembered me. And the young woman who made up my hot tea for me was another one who had been there on another visit, and she remembered me as well! Short, middle-aged Americans with ugly hats hanging around their necks are probably not all that common in the Marks & Spencer food hall cafe!

After my supper, I stopped at Lou Ann's favorite drug store Boots for some batteries for the camera and then at the other Marks & Spencer (closer to the hotel) for instant oatmeal for Sunday and Monday mornings, as well as a packet of "custard creams" for my evening tea in the room. I pondered getting the "crunchy golden creams," which seem to be more or less the "custard creams" with oats added into the batter, but I noticed in the ingredient list something called "invert sugar syrup", which is NOT in the custard creams, so I stuck with what I knew. I'm worried that "invert sugar" may be something indigestible like aspartame or one of those fake sweeteners. Not an appealing thought.

Hyde Park and the Marble Arch Park were both absolutely jammed with sun-enjoyers, and at the Marble Arch there were a handful of young men who had apparently decided to take the good weather as a chance to show off some acrobatics. The one who stood on his hands with almost absolute stillness and control was quite impressive!

And now I'm back at the hotel, cleaned up and typing. And Lord of the Rings is on television. Hmm. I may let it run for a while until 8 or 9 when it seems like something interesting may be on BBC.
Posted by Cooper Renner at 11:22 AM