A fairly easy day today after walking my legs off yesterday. Even my hips were starting to hurt by yesterday afternoon. It was also another very blustery and too chilly morning, though things seem to have improved a bit this afternoon.

I visited the Msida Bastion Historic Garden again and this time asked for the stone of Mikiel Vassalli, the "Father" of the Maltese Language. Not, of course, that he invented it, like Professor Zamenhof and Esperanto, but rather worked to make it a written and literary language. Or something like that. Anyway, he's buried in the Garden somewhere, but they don't seem to know exactly where, so there's a stone indicating that he and his wife are buried somewhere near. Here's the photo: 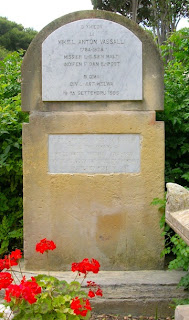 There are red and white geraniums at the gravesite, the colors of the Maltese flag, one of the women told me. So many of the stones are damaged that I asked her if it was all done during the World War II bombing or if it was partly vandalism. The latter, she said. It seems odd that the British would have just left it to decay, once it was full, since they were still running the island at the time, but I guess they did. She mentioned also that it was a Protestant cemetery--I suppose most of the other cemeteries in Malta are Catholic. The woman who answered my questions is British, but her husband is Maltese, though they met in England. She said she has lived in Malta since 1984. I would guess her to be 80-85 years old.

Here's a statue from the grounds, likewise damaged, but in that ancient Greek and "attractive" kind of way. You won't be able to tell from the photo, but the left foot is quite lovely! 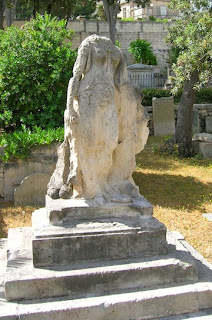 After visiting the Garden, I went back by the hotel for my second windbreaker, which at the time might have become necessary.

There was a power outage for part of Valletta this morning--I don't know how widespread or how long it lasted. Marks & Spencer's cafe had power, and was swamped with people, perhaps because other cafes were out? I don't know. Since this is the second outage of the trip, I hope it's the last!

I had my lunch of ham, potato chips and part of a Coke in Hastings Garden, then hurried over to C. Camilleri & Sons confectionary for a post-lunch goody. I got a cream-filled croissant, which fortunately was more croissant than cream. (There wasn't a plain croissant on offer.) Camilleri has beautiful pastries as well as a broad selection of regular packaged snack foods, so it's definitely a place to visit in Malta. Those of you who can eat nuts and fruits could have a heyday here.

I made it back to the Oratory of St Francis in time for the 12:30 concert, today a performance of soprano Arienne Gaerty accompanied by pianist Ramona Zammit Formosa, who also played last week. It was another lovely concert, and quite full--about 75 people, I think, in a fairly small space. I had to sit on a side pew and draw from there. The older gentleman who sat down next to me asked to see my "masterpiece" once the show was over, so I showed it to him. He asked where I was from and we talked for a while, both there and as we both left Valletta. He is a Canadian Maltese, or a Maltese Canadian--a native Maltese who moved to Canada in his 20s and has lived there ever since. He and his wife are now back in Malta visiting, he said. He was interested in American politics, so we talked about that a bit too. He was glad to see that we had instituted health care reform. He also said that there aren't nearly as many Maltese in Canada as in Australia, when I told him that I had heard there were a great many. He said he gets a small Maltese pension as well as his Canadian pension because he worked for the Maltese government for several years before he immigrated to Canada.

Some general tips:
1. Go to Camilleri for treats.
2. If you're staying in Valletta and want grocery type items, you'll probably have to shop at The Wembley Store, which has a decent selection, but certainly nothing like Tower Supermarket in Sliema. Be warned also that you will not receive service with a smile. The Wembleyans seem to work hard to be unfriendly. My friends at the Hollywood Confectionary and Daily Needs are much nicer and friendlier, but they are more like a convenience store with a much more limited selection of goods.
3. Ill-mannered toddlers act the same in Malta as in the US, and their parents are equally oblivious in both places.
4. Don't come to Malta in May. Too windy, not warm enough. Malta is all about being outside, but being outside is no fun if dirt is constantly being blown in your face or you're constantly cold. I had thought that my 2010 trip was the anomaly, with 2007 the norm, but this trip proves the opposite. I got really lucky on my 2007 Atlantic crossing and Maltese trip. Chilly and windy is the norm, not the exception. "Fool me once, shame on you" and all that. My first few days here I used the hotel room AC almost all the time; since then I have it off a great deal of the time, and have wished on occasion to be able to turn on the heat. You all know how hotel rooms can be hot even when it's chilly outside, because they are so closed up. This hotel room is not hot.

##
Well, I went back into town after writing the above, and I was wrong about the wind. It has not abated. Even so, I was able to sit out for a while at the Upper Barrakka and work on a drawing of an archway. The temperature had improved, I suppose because the morning clouds had mostly gone. It might have even been 75 degrees!
Posted by Cooper Renner at 7:56 AM