I struck out downhill (toward the harbor) rather than uphill (toward the bus terminus) this morning and discovered that that road leads down and around to near where the ferry lands, and also the curve in the road where I stood in 2010 and took a lot of photos of the Valletta Grand Prix. I haven't heard anything about it this year, so I guess it's not an annual event. By going downhill I passed alongside, and above, the hotel's pool and outside "play" area, so here's your first photo of the day: 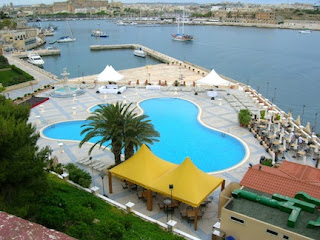 Once the road more or less bottomed out and I was heading northeast outside the walls of Valletta, I spotted some ruins built right onto the water. Perhaps they were once part of a shipping business, or a fisherman's house. 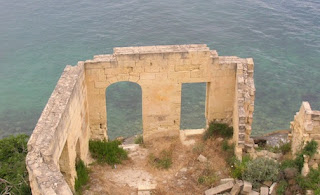 On a little farther I came to a tiny little residential area, also right down near the water and outside the walls, where--much to my surprise--an RV was parked. You know I couldn't resist that photo. 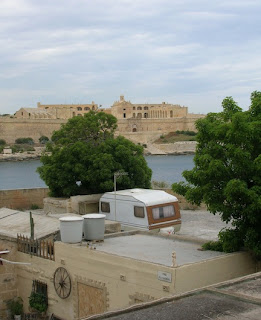 And then from there I was on and into town, climbing up toward the city center. Marks and Spencer let me down--don't tell Lou Ann. When I was there yesterday for morning tea, I noticed that they had Devon scones (i.e. plain scones) packaged up in fours. I decided not to buy them then, but decided later in the day that I ought to have something on hand a little meatier than cookies to supplement my diet. But when I went back in the evening, they were all gone. Likewise there were no plain croissants. So I figured I could start my Saturday there with morning tea, and buy some scones today. Nope. No new supplies for Saturday, AND they didn't even have muffins or donuts in the cafe. So I was stuck with buying a package of little chocolate chip muffins as the least chocolate-y possibility I had. Let me tell you the truth--I am TIRED of chocolate. Why doesn't it ever occur to businesses that if the plain/vanilla foods sell out, and the chocolate foods never do, that they OUGHT to offer more plain stuff? But it never seems to work that way. Those of us who want plain food have to fight each other for it. Ick.

Anyway after my tea and muffins, I went up to the square across from the Grandmaster's Palace and Armoury to sit and read for a bit with the wind more or less blocked off by the buildings. I heard a bit of a stir after a while and there it was--the Maltese Changing of the Guard! So here are three photos for you: 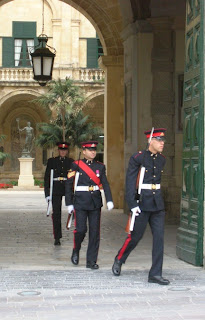 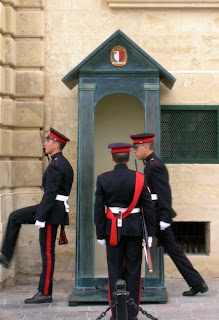 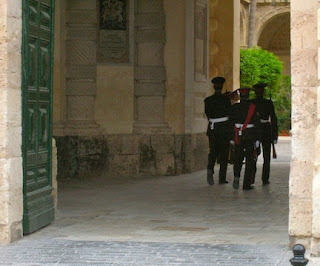 Sort of cool, no? It was an almost entirely cloudy morning, with even a bit of sprinkling a couple of times, so this was a nice diversion from the ugly day. A bit later, on my way back to the hotel to drop off the remaining muffins and some applesauce I'd bought, I passed this young bagpiper near the vanished city gates. 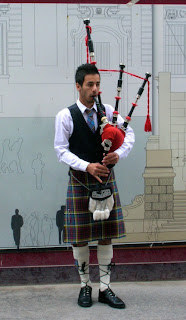 He represents one thing that is different about Valletta this time: more street musicians out and about. Another one I've seen a couple of times looks like he came straight out of the Andes--and he may well have. He plays wooden flutes etc. and sells his CDs too. I've also seen, more than once, a couple of older men playing accordions, and this morning there was also a clarinetist playing along to prerecorded music near the fancy Caffe Cordina, with a sign noting that he sometimes plays parties!

I visited St John's Co-Cathedral today, my third time there, during the 3-hour free admittance "International Museum Day" offering. I had forgotten how incredibly ornate the interior is, with virtually no spot left unadorned. One of the placards gives 400 as the number of tombstones which cover the floor of the nave. I also visited the Oratory where two of the seven Caravaggio paintings which he did while in Malta are on display. The Beheading of St John the Baptist is about the size of two Casita RVs, and you will probably remember my mentioning it before. The other Caravaggio here is a painting of St Jerome. There are many works here by a painter named Mattia Preti, whom I'd never heard of before visiting Malta in 2007, and a couple of the tapestries are based on "cartoons" by Rubens. It's interesting to see some of the priestly garments on display too, since some of them are from the 1400s, before the Knights had even come to Malta.

Later in the afternoon I was visiting St James Cavalier again and was told there was about to be a guided tour of the traveling exhibit that's finishing up tomorrow. So I joined that tour and got to hear about some of the works I had first seen a few days ago. One of the women in the tour was actually from the British Council for (Something) which sponsored the traveling exhibit, and she said it is going on to Macedonia from here.

It's been a mixed day for weather: terribly gloomy morning, mostly sunny afternoon, but with a return of wind, though not as roaring as before, and a chill to the air, which makes me think that London may be as warm as Malta today since I saw on the TV that London was supposed to be 19 today (i.e. about 66 or 67 Fahrenheit.) I hope there's at least one warm day when I'm there, and I hope it will warm up here. I am heartily sick of wearing a windbreak (or two!) all day long every day. I may never leave the southwest again.
Posted by Cooper Renner at 8:23 AM