Well, the Victorians are letting me down. Or maybe it's that the 21st century Londoners don't sufficiently respect the Victorians. You remember that on Saturday I found the Dickens Museum closed, but it didn't occur to me till today that this is the bicentennial of Dickens' birth. Wouldn't you think they'd want the museum to be open during the bicentennial year, instead of undergoing upgrades for 2/3 of the year? I would. Hmmm.

And then today I decided to walk down Melcombe Place, which is a block north of Marylebone Road, so I could see one of the places Wilkie Collins lived. Unfortunately I couldn't find a marker for it. Unlike many streets in London, it's actually several blocks long, but the block that looked most likely, on Dorset Square, didn't have the right house numbers. There was one, though, that was being painted, so maybe the numbers have changed and the marker was down for the paint job. Who knows?

Anyway I had decided I would go back to the British Museum (a third time in 5 days!) to look at the Picasso etchings again, and along the way I passed the museum of the Royal Academy of Music. So I went inside there and saw an interesting display about Dickens and some of the ways music was connected with his life and career. They also have a number of old and very expensive stringed instruments, mostly violins, on display--some Stradivarius models, of course! But I had to wonder if they get played anymore. The next floor up had a group of pianos, but they were not yet uncovered while I was up there. It was in the Dickens display that I saw some map references and information about various London locales connected with him. I decided to walk down Cleveland Street where he had lived on two different occasions, as a child and teenager. (There was another building of some importance in the same block, but now I've forgotten what it was supposed to be--a newspaper office, maybe?) So I modified my route to the British Museum, so I could walk down Cleveland Street.

But you guessed it! The house isn't marked and, in fact, one of the addresses given at the museum would seem to have been on the other side of the street, where construction was going on. But I'm giving you a photo of Cleveland Street anyway, and you can just imagine it in 1820! 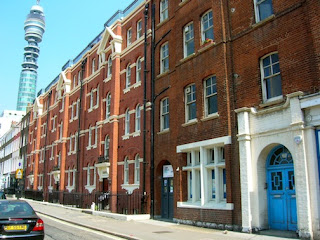 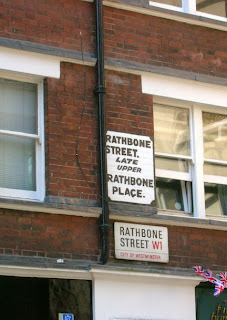 I also passed this plaque, which I guess will have to stand in for Dickens and Collins. I can't for the life of me remember which street it was one. 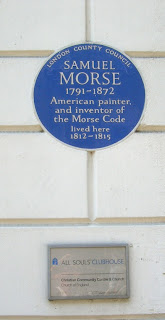 Finally I made it to the British Museum and the Picasso etchings. They really are quite lovely, and look--most of them anyway--like pen-and-ink drawings. Many, if not most, of the ones on display come from the early '30s when Picasso was in his late 40s and early 50s. There are several featuring the Minotaur and quite a few of a sculptor with his models and sculptures. (I think I probably mentioned that on Saturday.) After I finished looking, I went over to Mesopotamia again and sat not too far from Gudea and drew my own version of a Picasso--mingling a werewolf, in place of the Minotaur, with other elements from one of Picasso's works.

By then it was time for lunch at Marks & Spencer, and something much more agonizing: scarf shopping for my mom. I'm sure you will all get a good laugh over the idea of my agonizing over women's scarves, but I did. I looked at all of them I could find in the M&S women's wear and then finally decided to go bcd to the other M&S, nearer the hotel, and make a decision there. I was thinking there were other scarves there, though I may have been confusing it with Debenhams.

But first after leaving M&S I went right across the street to HMV (music store) and looked at CDs again. Time for more agonizing. I discovered that there were other nice little boxes of 5 CDs in mini-LP sleeves besides Warren Zevon, including Dr John, Jefferson Airplane, and even Sly and the Family Stone. And of course there were the 2 for 10 pounds CDs. I'm sure you are all thinking that I am the only person in the history of the world who will agonize and ponder for as long as 30 minutes over whether or not to spend an extra 10 pounds while on vacation to get 2 more CDs to listen to in the truck when I get home. Finally, I decided to pick up the expanded CD of Tyrannosaurus Rex's record A Beard of Stars along with a fairly recent CD by a band called the Low Anthem which has been well-reviewed. I decided I should get something new to explore, even if I end up not liking it, rather than something from the old days, like the first Love LP.

So, after purchasing those, it was off to the other M&S to find the right scarf. I also had in the back of my mind that I should swing through Waterstone's bookstore and pick up a "vintage" mystery for Debbie, who will be picking me up at the airport on Tuesday. She likes mysteries from the '20s and '30s, and I found one that I hope will be new to her! We'll find out soon enough. If she groans when she sees it, I can read it myself, I reckon.

And then Marks & Spencer. The pressure was on because I needed to find a good scarf at this store, so I wouldn't have to walk back half a mile or more to the other store! And now I can't remember if it was at this store or the first store that I talked to two different women about scarves and the material they are made of. Y'all would all have been laughing at me. Finally I found what I think will be a good choice, and the woman at the checkout (the till) agreed that it would be a good scarf to match with lots of different colored blouses. Phew!

I then went back to the hotel for a short rest, but mostly for a chance to unload the back pack! Had a bit of a snack and rearranged the backpack, then headed off again. I decided I was hungry enough to go ahead and have supper, and the nearest biggish grocery was actually  inside Paddington Train Station (where I'll head tomorrow to get to Heathrow Airport), a Sainsbury's according to a woman I asked on the street. But about the same time I saw Sainsbury's in the station, I also saw a Marks & Spencer Simply Foods, so I went there instead--I know what I will find. Can you picture me sitting on a chair in the train station having my turkey, chips and soda, while other people--presumably travelers--come and go in the adjacent seats? And can you imagine the youngish Asian woman with the continually toppling luggage who actually asks me, about the time I'm finished, if I will watch her luggage while she goes to the bathroom? I have to wonder if travelers through London are usually so trusting. She came back fairly quickly and I headed off. I wanted to visit Hyde Park one more time, enjoy the late afternoon, have my apple. I took a seat at the Italian Gardens, had some water and apple, and did a drawing, probably my last for London. Here it is: Monday in the Park with Cooper. 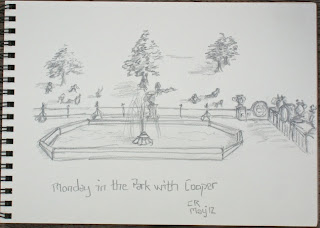 And then I walked around a bit, visiting Peter Pan again and walking up toward the Queen's Temple, which I couldn't quite remember. And I found a man standing perfectly still in front of it, with a book in his hands. You can see in the photo that his dark suit makes him look like a priest conducting a service. I took this photo from quite a distance off, so who knows what was really going on! 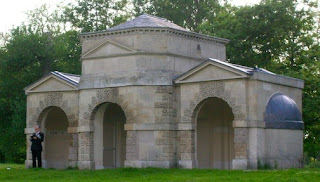 For the 2007 trip, I took two pairs of shoes: a pair of Merrell's sandals my oldest sister bought for me and my so-called big boy shoes, Timberland's (I think) lace-up shoes with nice thick soles. I figured I would alternate the shoes and sandals, along with jeans and shorts, on the trip, but it turned out I wore the sandals and shorts almost every day. The Merrell's held up beautifully and I continued wearing them for at least a year afterward. I must have put hundreds of miles on them: maybe a thousand or more. And I kept the big boy shoes up until a few months ago. I never wore them as much, but they held up well for more than 4 years.

For the 2010 trip, I took only sandals, a pair of Timberland "fisherman" sandals and a pair of Dr Scholl's. The Dr Scholl's didn't wear well at all. The insoles were tearing before I left Malta and, after a drenching rain in London, I decided they didn't even need to make the trip back to the US with me. The Timberland's, however, held up very well and I continued to wear them for at least a year, just like the Merrell's.

This time again I've had two pairs of sandals with me. One pair is Bass, an expensive pair that I got heavily discounted at the outlet store. I consider them my "dress" pair. They have held up well and are comfortable, but I have my doubts that they will last the way the Timberland's and Merrell's did. We'll see. The other pair--the "water friendly" pair--were less expensive, but have still not done as well as I would have expected. They're from Alpine Design. The left sole has split all the way across, under the ball of my foot, and the heel is practically disintegrating. The right sole has held up much better, and the heel is still intact, but the sole is also splitting, though less drastically, under the ball of my foot. These too will not make the return trip to the US. There's no point.

So, okay. There's your shopping news for the day!
Posted by Cooper Renner at 12:07 PM

Goodness, me! Returning so soon. The mind boggles.

It seems long. In some ways it maybe seems longer than the other trips.

My favorite places to shop for scarves are Liberty of London and any Museum gift shop. I have a beautiful silk scarf from Liberty from 30+ years ago, and a really cool silk scarf with hieroglyphics from British Museum.

As for shoes, you might check out Keen, especially for wearing in water/rain. You may recall I'm something of an expert on shoes.

My favorite places to shop for scarves are Liberty of London and any Museum gift shop. I have a beautiful silk scarf from Liberty from 30+ years ago, and a really cool silk scarf with hieroglyphics from British Museum.

As for shoes, you might check out Keen, especially for wearing in water/rain. You may recall I'm something of an expert on shoes.

I have seen Keen shoes in the store--Keen sandals, I mean--but haven't yet owned a pair. What if I get a pair of boat shoes to alternate with my Bass sandals?!