I was wrong again about the Msida Bastion Historic Gardens. After posting Tuesday afternoon and having a bit of a rest, I headed off toward the Gardens thinking they would surely be open till 5, at least. But no! They are in fact only open three mornings a week for 2 and a half hours each time (and on the first Sunday in addition). I will have to wait till Thursday or Saturday to check them out. And they are not in any conventional sense gardens: they are a cemetery. The oldest known grave dates to 1806 and the last to 1856, by which time the place was full! Now I'd really like to have a bit of time to wander inside.

Back in Valletta I had a supper of "turkey ham," potato sticks and Coca-Cola. And I have a sad bit of news for my friend Debbie, all the way to Egypt on the ship by now. It has been a cause of grieving for her not to be able to find Dr Pepper in Europe, BUT this afternoon I saw it in Valletta, at the little take-out-only "sweets and sustaining" cafe where I bought my Coca-Cola. She should have come to Malta instead of staying on the ship, I suppose! Perhaps I shouldn't tell her?

Both pigeons and cats are in evidence at the Upper Barrakka Gardens, but dogs are forbidden. After finishing my meal, I took this photo, looking down into the saluting battery where my shadow appears in almost the exact center of the photo. This is probably as close to a photo of me as you are going to get on this blog! 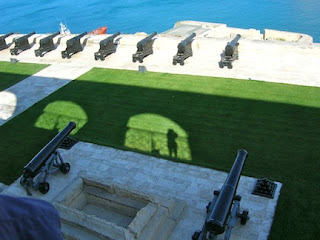 And this is a shot looking from the Gardens into the densely packed cityscape of Valletta. 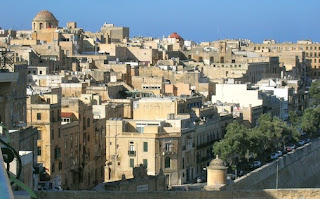 Once again I had morning tea at Marks & Spencer, followed by more drawing time in the Upper Barrakka Gardens. Ship day-tours were much in evidence today as two cruise ships were in the harbor--the Costa Luminosa and the MSC Splendora. The Splendora tour members wore more obvious stickers on their shirts, so maybe they get lost more easily than Costa cruisers. I heard one Splendora guide speaking in Spanish, but otherwise I couldn't tell the nationality of the groups. Later in the day I also ran into a group of Belgian high school students on a week's break from classes.

At 12:30 I attended the music performance at St James Cavalier, operatic vocalist Charles Vincenti accompanied by Maria Elena Farrugia on the piano. He had a fine, powerful voice and the performance was quite good. (I drew of course while listening.) Except for a s0ng from Porgy and Bess, all of his selections were from European masters like Rossini and Pucccini.

I had part two of my lunch after the performance, back at Upper Barrakka. Within two minutes of my opening my tuna can, the local cat was on point, just staring at me. The pigeons of course are always milling about, but they weren't interested in tuna. This photo comes from the top of the walls, inside the Gardens, looking down at construction equipment. You should be able to gauge, by the size of the office/trailer at the bottom, how high the walls are here. This is another dead end section, where the walls turn sharply and soldiers on both sides of the gap could fire down upon any invaders below. 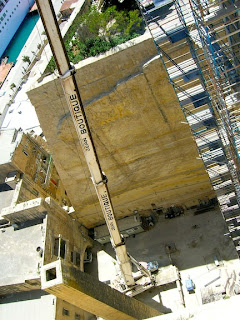 After lunch, I visited the Malta At War Museum, which has been redone since I first went there in 2007. The organization is better now, and the descriptive wall placards give a good sense not only of Malta's role in World War II but also of the European war in general and of earlier events of the 20th century which had a direct bearing upon Malta. I had not remembered that FDR visited Malta before going on to Yalta, though of course Eisenhower was here on the way from North Africa to Sicily and the invasion of Italy. Nor had I remembered that Mussolini lived two years after being removed from power in 1943. It was also interesting to read that when the British gave Malta the beginnings of self-rule in the 1910s, there were two major parties, one of which wanted English and Maltese as the national languages, with the other wanting Italian. I suppose it's not at all surprising, given how long Italian-speaking knights had been in power here. And the Italian connection led also to some Maltese having Fascist sympathies in the years between World Wars I and II.

Flash photography isn't permitted in the museum, but I was able to get a (slightly distorted) photo of this drawing of men making coffins, though I didn't see any specific explanation of the context. 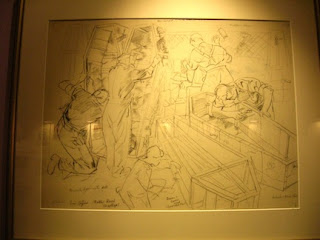 There's also a small air raid shelter included as part of the exhibits now, and it's bigger than my RV! I tried to get a photo of it, but there was simply not enough light for the photo to be of any use.

On my way back to the center of the town from the museum I took this photo of one of the guards outside the Parliament gates. 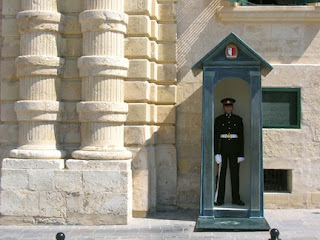 The weather, as you can tell from my photos, has been mostly sunny, but the wind again today was just brutal. Unfortunately the best parks/gardens are exposed--up on the city walls where every bit of wind hits them!

The question of the day is: Where is Lou Ann? Did she leave for Europe on Monday, or is she leaving tomorrow?
Posted by Cooper Renner at 9:41 AM

I like the photo looking down into the saluting battery.

Thanks, girl, glad you're enjoying some of this! How goes the frozen north?

It is indeed a loud blast the battery puts off each noon, but this photo was much later in the day.

She is in Amsterdam, recovering from jet lag!

Weather has been very nice here, though I think it may rain tomorrow.

I saw Dr Pepper in Helsinki! But I always go for Fanta if it's not the American kind (bright orange). Still, my first Diet Dr Pepper when I got home was sublime!