Yesterday afternoon after posting for you all, I went back into Valletta and had fries and tea at the Cafe Deux Baronnes. While eating, I worked on a drawing of the cafe (and I'd like to do a color version once I get back to the States) and incited some attention from a couple of the employees. So I took a photo of it before leaving, and then let them keep the drawing there at the cafe. 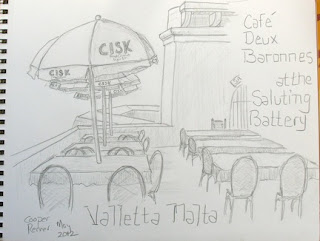 Today after a visit to the post office and morning tea at Marks & Spencer, I went down to the harbor to ride the ferry over to Sliema for the first time this trip. I bought a "return" ticket (two-way) and sat down to read while waiting the ferry's arrival from Sliema. After just a few minutes, one of the employees came to tell me and the other passengers we could take the water taxi instead. There were only four of us, so they sent us over on a much smaller boat that would hold perhaps a dozen. Much closer to the water, but also a much quicker trip. After leaving the boat, I took this photo of crowded Sliema parking. As if driving here wasn't bad enough! 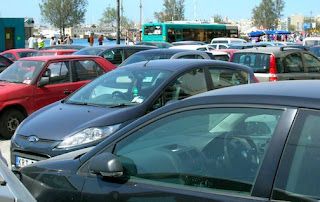 You know that I love Books Plus in Sliema, and I had pretty well decided on the book I wanted to buy, but I still browsed for a while first. There are so many books on the shelf, even in a small store, that either aren't available in the U.S. or fly under the radar because there are so many books to try to keep up with. I may look for one or two of them when I get to London, since most of the English books here come from the U.K., but I ended up buying what I thought I would: Titus Awakes by Maeve Gilmore and Mervyn Peake. Mervyn Peake was an English author and artist whose most famous work is the Gormenghast Trilogy which several of us in my high school group read after reading Tolkien. It was marketed as fantasy at the time, but it is most certainly not. Sometimes like Dickens in some ways, often quite funny, sometimes very creepy, and quite original. Several years ago the first two books of the trilogy were made into an English miniseries, which was also quite interesting, under the title Gormenghast. Well, Titus Awakes is a fourth volume in the series, a volume that Peake wasn't able to write before he died. He was terribly debilitated during his last 8 or 10 years of life from some kind of degenerative brain disease and left only a few pages of text and some notes for the fourth volume. His wife Maeve Gilmore took those pages and used them to create the fourth book herself, after his death in 1968. She died in 1983 and the book was "lost", only to be found again very recently. And so it was published last year, which was also the centenary of Peake's birth.

Today we finally had a day of light wind! Now Malta, like Galveston (and Dallas for that matter), hardly ever has a truly calm day, but today the wind wasn't roaring and it was pleasant to be out and about. After leaving Books Plus, I went by the Tower Supermarket and got some food for a little picnic on the seawall overlooking the Mediterranean, right near the Europa Hotel where I stayed on my first trip here. Then I went back to The Point, the new shopping mall, and roamed for a while, along with having a croissant and another cup of Marks & Spencer tea. Then I went down to the Strand in Sliema (which overlooks the harbor, not the Mediterranean proper) and spent maybe 30 minutes doing a drawing looking across at Manoel Island. My ferry return trip was again on the water taxi, though I saw a big ferry coming across as we headed out. Maybe they're sharing the chores nowadays?

Back in Valletta I went to the Lower Barrakka Gardens for the first time this trip, and it was quite pleasant. I worked on another drawing, this one with distorted perspective since perspective gives me trouble. Some of you my remember the Alexander Ball monument from my 2007 blog. Here's my drawing: 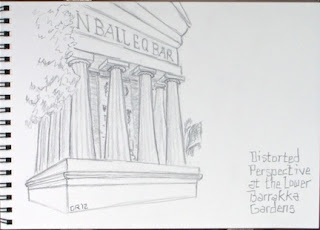 One of the purposes of the Gardens seems to be to celebrate freedom in countries around the world. In addition to an older plaque in honor of the Italian Garibaldi, there is also a 40th anniversary plaque to the "Prague Spring" of Czechoslovakia in 1968, commemorating the friendship of the Maltese and Czech peoples, and another in honor of the 50th anniversary of the 1956 uprising in Hungary. And there is this little tree, quite recently placed for Queen Elizabeth II's 60th Jubilee in April: 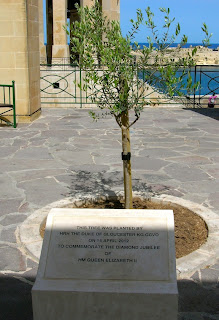 Perhaps someone will get my friend Nancy on the Internet to show her this photo, even if the inscription can't be made out.

From the lower gardens, I could look west and see the columns of the Upper Barrakka Gardens, and the yellow umbrellas of the cafe, AND a pair of large cruise ships. I hope they'll still be there when I go back into town shortly to have a bit of tuna and applesauce in the Gardens.

Malta, by the way, has replaced its aging fleet of buses since I was here in 2010, and that is quite admirable. It's to be expected, in such a situation, for the fares to go up, but it hardly seems welcoming for the fares to be higher for tourists than for residents. Come on, Malta! You can do better.
Posted by Cooper Renner at 8:02 AM

I'll be interested to hear your take on Titus Awakes (which I have not read).

Had you heard of it before? It's not very well written--by which I mean to say it's "good writing" instead of good writing. Sigh.

A lot of places charge more for non-locals. I found that in South America. I guess it's because of taxes and subsidies.