Another beautiful day today: not quite as windy and a bit warmer than yesterday. Like a very good April day in Texas. The parks were packed, but so were the museums, like yesterday.

I began with a long walk to the Tate Britain Museum which I think I've visited on every trip. Along the way I stopped at Pret a Manger, a chain which serves sandwiches, baked goods and drinks. The name is French for "ready to eat" and is pronounced something like Pret-uh-Mahn-zhay, but I prefer to think of it as Pretty Manger. They have good tea and good croissants. After my stop I passed by Buckingham Palace. They've got big grandstands/bleachers set up around the circle and fountain in front of the palace, and some kind of big rig--apparently for shade?--is going up around the fountain itself. It sort of looks like they're converting it into a merry-go-round for the Jubilee. I'll be missing the big celebration by less than a week, and given how smashed with people London will be, it's probably a good thing I'll be gone! 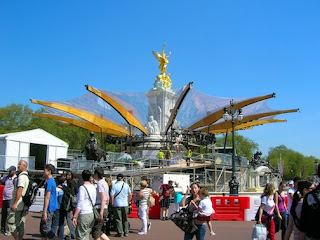 I moseyed on amidst the crowds and saw tourists having themselves photographed with the uniformed guard outside the Guards' Chapel, which is next to the Guards Museum. It's a museum I've never been to. One of these days, maybe. The amiable young man on guard looked exactly like the guys at the Palace.

In between there and the museum I passed this huge sculpture--two or three floors high--in front of what seemed to be an office building. Maybe it's the headquarters for a bicycling company? I didn't see a name on the building, but it was on Horseferry Rd. 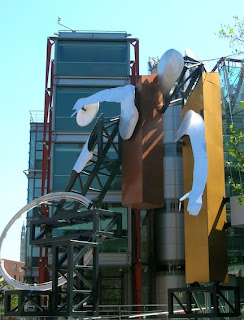 At the Tate I took a bunch of pictures of artwork, though the light's not really good enough for it and you aren't allowed to use flash. I also did a bit of drawing, like yesterday. One piece I drew is by Ian Hamilton Finlay, a Scot poet who died a few years ago. I'd almost swear he designed but didn't execute the sculpture, in bronze, because that seems to have been his common procedure. He considered himself a poet and not a sculptor. This work is a kind of stylized guillotine with a line from the Aeneid etched into it. While I was standing there starting to draw, I apparently met a Tate ghost. There was a network of lightweight aluminum railings near floor level, to keep us from getting too close to the works, and one of the railings suddenly just fell to the floor. Maybe it was someone who'd been guillotined and got swept from afterlife-Paris to afterlife-London on a spectral wind!

Perhaps the most amusing piece I saw in the museum is a very large painting, a joke on the American artist Donald Judd whose work is famously on display in Marfa, Texas at the Chinati Foundation which Judd started. The artists of the painting are a husband and wife, whose names I can't completely remember--Richards or Roberts, I think. 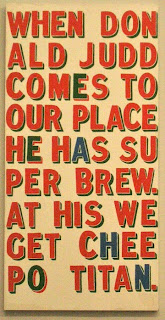 I had a bit of lunch at the cafe--yet another croissant and some sparkling water, along with one of the Starkist tuna packets I brought with me from the US. I figured I might have more trouble getting meat today, so I carried it with me. Then I visited the Clore Gallery, which is right next to the Tate and which houses an immense number of JMW Turner works, sketches, sketchbooks, paintings, etc. I've seen a lot of his work here, so I wasn't concerned to spend a lot of time there today. But I love looking at his sketchbooks, maybe more than the completed paintings. I also sat for a few minutes and drew a very simple pencil version of one of his paintings--one of the Roman Forum but looking very fantasized and "Romantic".

I had thought I might take the boat that leaves from the river near the Tate Britian and goes to the Tate Modern which is a couple of miles downstream. When I got to the pier, though, I saw that it would be about a twenty minute wait for the boat to return, and then an almost fifteen minute ride to the Modern, and I decided that, in that amount of time, I could walk two and a half miles. So I took off on foot. Along the way I took this photo of Victoria Tower, which is at the south end of the Houses of Parliament. Big Ben the clock is at the north end. 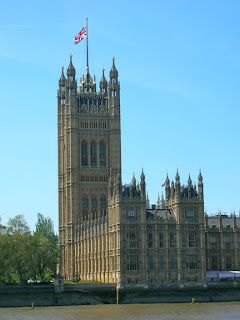 It was a long walk--maybe a bit longer than two and a half miles--but I made it. The river walk was quite jammed with people for most of the length of the walk, which took me past the London Aquarium, the London Eye (the frighteningly high Ferris wheel), and the National Theatre. Lou Ann will be ticked at me because I didn't stop for the 3 pm performance of Misterman, but at least I thought about it a bit.

Just before you get to the Tate Modern is the Bankside Gallery, which is the gallery of the Royal Society of Printers and Engravers (or something like that). They display a lot of prints, etchings, woodcuts, and so forth, which are by members of the society and are for sale. Some of them are quite lovely and not terribly expensive--but where does a man who lives in a Casita travel trailer display a beautiful print? I did however buy three little booklets originally published a few decades ago (I think) by English novelist J.L. Carr. The gallery has quite a number of the booklets, small enough to be mailed in a birthday card-sized envelope and very light. They include his selections of English poets of the past, little "dictionaries" of Kings and Queens, and so forth. Of course they are no longer published by Carr who is deceased, but they're still pretty cool.

The Tate Modern was more or less a disappointment, which it always seems to be to me. I like a lot of modern art, but the Tate Britain always seems to please me more. In fact today I discovered a new favorite artist I've never heard of before, which the Tate Britain has dedicated one room to at the moment: William Roberts. As well as paintings and "real art", he also designed book covers and apparently had a pretty strong sense of humor. He was already experimenting with cubism in his teens, inspired (according to the museum's explanatory cards) by another artist at the school he attended. I liked his work enough to look for a book of his work in the museum store. And yes, they had one, but 1] it was bigger than I wanted to think about carrying back in a duffle bag; and 2] it cost 40 pounds (over sixty dollars); and 3] it looked more like a "study" of his work--a lot of text--than just reproductions of his work, which is what I would like to have. Maybe there's something in print in the US. I'll check!

Well, after all this art-ing, it was time to start the long trek back to the hotel, although that trek included a muffin and tea at Costa Coffee and some browsing at Waterstone's bookstore.. I wandered a couple of streets I don't think I've been on before, including Savile Row (isn't that the tailors' street?). And on South Molton Street I saw, to my surprise, one of the bright blue historical markers telling me that William Blake lived here! You can see the plaque to the right side of this photo, but I wanted you to be able to see what Blake's old home is now so this photo isn't zoomed in. 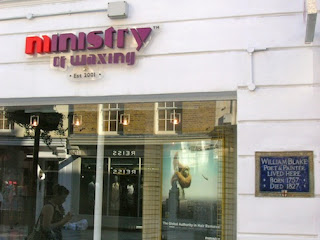 Yes, it says "Ministry of Waxing." I'm sure Blake is pleased!

A busy, tiring day, so I should sleep well tonight!
Posted by Cooper Renner at 12:42 PM

A joke on Donald Judd!

Oh, that's where William and Catherine lived for nearly twenty years, I think. Not where he died, but where he worked on "Jerusalem" for all those years.

Thanks, Bob, for the tip. I wish there was a handy, non-expensive sampling of his drawings in a book.

Pedantic point: The clock isn't Big Ben. BB is the name of the bells.

Just the bells? I guess I never knew that. They should be "big bens", hehe. I also just saw that I typed Tate Britian instead of Tate Britain