Here's what I wrote on April 28, the day we embarked: "Finally! We got to board the ship around 2 p.m. and get ready to leave gloomy, cloud-covered Ft Lauderdale behind." Unfortunately, we left only Ft Lauderdale and not the gloom behind. This has been far and away the most cloud-covered and chilliest of my three transatlantic crossings. Not until yesterday--the eighth of the voyage--did we have a truly sunny day, and even then there were clouds a great deal of the time. Sunday the 29th was warm, but beginning on Monday the 30th, the winds turned terribly cool. At least a couple of day our highs were only in the 50s: February in Texas!

One of the great treats of the crossing was getting to hear the Polonia String Quartet several times, playing a mix of contemporary and classical pieces. I did several sketches of them and passed five along--one of each member and one group drawing--and they seemed pleased to have them. I've also enjoyed sitting in for parts of a few of the art auctions. The most notable purchase I was "in on" was a Rembrandt engraving which went for more than $14,000. Clearly most of my fellow passengers are not ex-school teachers on pensions. The range of works offered for sale is fairly broad but the "serious" end of the spectrum--prints or engravings by Rembrandt, Picasso, Dali and Chagall--is pretty limited. Most of the works are by contemporary artists in popular veins. Yes, even Thomas Kincade. (Did I spell that correctly?)

I've also enjoyed a couple of movies--Midnight in Paris, which was just as delightful the second time, and My Week with Marilyn, which I hadn't seen before. My Week was more serious than I expected it to be.

My niece Daphanie's birthday passed while I have been incommunicado. She will prefer that I not mention that she is now 45. Hehe.

Some of you (especially Cindy S. of Dallas) will be mightily concerned about my culinary selections. They have included ham, turkey, cold peas and corn (from the salad bar), oatmeal (of course!), bagel, apples, potatoes fried, mashed and baked, stewed carrots, rolls, brownies, cookies, soft serve vanilla ice cream and gelato, and lots and lots of hot tea.

I've done a good bit of drawing while on the ship, not just the Polonia Quartet, but also versions of people on deck and even one drawing of part of the ship. Here's a photo of a sunbathing women with painted toenails. 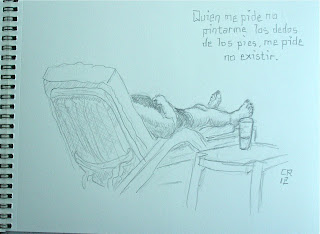 We have had 6 time changes in the 8 days of the crossing, as well as the time change I made coming from Dallas to Ft Lauderdale. Holy cow! It's not jet lag, but it's ship-lag to be sure.

And today of course we finally came to land again. Normally I really enjoy the days at sea, but this time I didn't much because the weather was so uncharacteristically unconducive to being on deck. Hopefully from here on out, things will look up in that department. I've named this crossing "The Voyage of the Damned," owing first of all to the weather, but also to the fact that norovirus appeared on board about 3 days out into the voyage. And then yesterday we had a bit of excitement, if that's the word, when we lost all power for a few minutes! I was sitting on deck, fairly well screened from the wind, when everything went silent. The "outage" didn't last long, but it took a while for all of the engines to come back online, apparently. It was a little unnerving.

I made a ship-sponsored day tour this morning. We took in Europa Point, which is I believe the southernmost point of Europe. There's a mosque here, paid for by King Faud in the '90s, and a lighthouse. Our guide said there are about 2000 Muslims in Gibraltar. The total population is around 30,000. There is also a large Catholic church, a Church of Scotland, an Anglican church of course, and 4 synagogues. From Gibraltar you can glance across the harbor to Spain and across the Straits to Africa. It's been sunny today, so Africa is easily visible, but the wind is still too chilly for me. Maybe tomorrow we'll sweat!

We also visited St Michael's Caves, which have a performance "hall" inside them (with excellent acoustics), and stopped to see the Barbary apes. Perhaps this photo will amuse you. 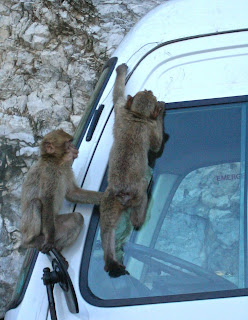 After returning to the ship, I had a second breakfast (a waffle and a box of Froot Loops) and then walked back into town to sniff around and see the sights. Gibraltar is quite small, three square miles maybe, and the city center is compact and easy to stroll. Very "British" looking, to be sure, since the Brits have controlled it since 1704. Fish & chips, pubs, and so forth. I had a donut (which tasted very much like cake) from Gibraltar Confectionary and an actual Coca-Cola, for the first time since Florida (or Texas?) There is an enormous banner in the center of town, in honor of Queen Elizabeth II's 60th Jubilee this year and upon which she is called "Queen of Gibraltar," and quaintly named establishments such as The Angry Friar. I also saw the Cannon Hotel, which I had once planned to spend a few days in, five years ago, before I cut short the original "European adventure."

Well, we are now pulling out to sea again. I am hoping to get to bed earlier tonight. I've been a bit sleep-deprived for a few nights, first because of loud pounding noises coming from somewhere in the ship and waking me before dawn and next because of an early day tour today. Late last night they moved me to a different stateroom and plan to pull some panels off the wall in my old stateroom to see if they can find what the problem is. I was sad to leave my old steward behind, but I'm sure the new one will be fine.

PS: This is a quick update from Alicante, today's visit, where the pier has wifi just outside the ship. I'll write about Alicante later!
Posted by Cooper Renner at 6:08 AM

I really liked Gibraltar and would like to spend more time there, and not on a Sunday when everything was closed! That tiny historical museum I think I could spend a week in--so much history!

I enjoyed walking around the central town. I had a donut! I'm not sure how much there is to "do" there, but I didn't see the museum. Maybe I need to go back with you as a guide.

I took a tour and it was one of the best tours I've ever taken. The guides there have to have special training.