Another Mini-Concert and a bit of this and that.

Today I went to my fourth concert since arriving and my first "noontime" performance at the Music Room at St James Cavalier. The concert was about 30 minutes long and included the 1st movement of Moonlight Sonata, 5 Preludes by Chopin, and "Theme from Warsaw Concerto" by Richard Addinsell, whose work I'm not familiar with. (But then I'm not exactly Joe Classical Music, now am I?) The pianist was James Zammit who is a banker by trade and a violinist on the side. He has played with the Malta Philharmonic Orchestra, the St James Consort and other orchestras, but has also been studying piano for a number of years. Today's performance was his public debut as a pianist. It was a fine show. As is often my habit, I drew while listening. The woman next to me thought I ought to show the drawing to Mr Zammit, who came back into the Music Room to greet people after the show. I did so, and he and family members liked it, so I asked he would like to have it. He said yes, so I took a photo of it right then, then signed and dated it. Unfortunately the light was too low in the music room, so the definition on the photograph is not very good. It was a sketchy sort of sketch anyway, but not quite as hazy as the photo, which I adjusted as best I could. Since I no longer own the drawing, however, this photo of it will have to do. 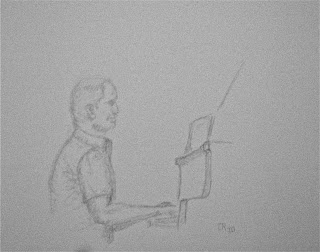 Earlier in the day I went to Hastings Gardens again and worked on a sketch adapted on the base of column there. It's quite a large base and there is no column upon it. But the inscription explains: "THE COLUMN 70 FEET HIGH ERECTED ON THIS BASE / TO THE MEMORY OF SIR FREDERICK PONSONBY / WAS DESTROYED BY LIGHTNING IN JANUARY 1864." I wonder what his family thought when they heard about it! On my walk over to the gardens, I took this photo which sort of encapsulates the way old and new can come together in Malta: here is what looks like an exhaust fan built into an old window in a thick stone wall with flowering weeds growing out of the crevices. 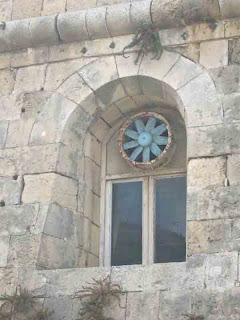 I also spent some time in Sliema, including my first stop at Stella's Coffee Shop in the Plaza shopping center. When I paid the owner for my tea, he said, "You've been here before, haven't you?" I reminded him about my earlier trip and mentioned that I was going on from Malta to London in a bit. He said he had taken his wife and son to northern England on a trip with his wife and son not long ago. It was cool that he had remembered me from so long ago, but I had been in the shop quite a number of times. You know how I am about tea.

The couple who own the Hollywood Grocery in Valletta go to London fairly regularly and always stay near Oxford Street and Debenham's Department Store, so business must be pretty good for Stella's and the grocery both, since England is not a cheap place to visit.

Before going over to Sliema I took a couple of photos at two of the places where some of my Grand Prix shots were taken on Sunday. I thought you might get a kick out of seeing what the 'raceway' normally looks like. 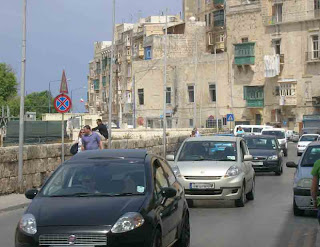 Then later this afternoon, after returning from Sliema, I walked along a road, just above the water, where I hadn't walked before--it goes on from where the ferry landing is, at the base of the city walls. I had always thought of that as kind of a dead end there, but it's not. There is a large swimming pool there, just above the harbour, a sort of lido, I think they call it, and farther along what looked to be private dwellings. After a bit, it turned to the right, and there was an area where cars where parked and then an arched opening in the bottom of the walls with a street coming through. I saw several people walking down it, apparently leaving work inside the walls and coming to their cars parked outside. I walked a bit farther along there, then turned back and went through the gate and back inside the walls. Here is a photo of some of the worn rock--sandstone, I suppose--along the water side of the road. It has been so weathered and smoothed that it looks almost like that fake rock at Six Flags inside the old Cave ride! 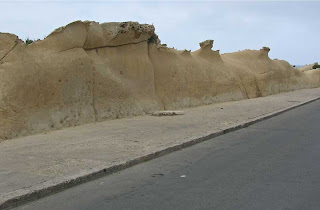 After having some fries and tea (I had already had some turkey from the supermarket's deli in Sliema), I was walking near the city gates when a couple noticed my shirt and asked me if I were from Portugal. They are Portuguese and have been living and working here about 2 and a half years in a factory that makes toys. I believe they said the name was PlayMobile. They mentioned that gasoline is cheaper in Malta than Portugal because the Maltese get it from Libya (not much more than 100 miles away), but that food is less expensive in Portugal than here. They said their town in Portugal is on the south side of the Tagus River, across from Lisbon, and they mentioned the big suspension bridge that crosses the river. I was able to tell them I knew what they were talking about, that I had seen it, and had in fact done a drawing including it and the big statue of Christ nearby.
Posted by Cooper Renner at 12:00 PM