"A Night at the Opera"

Some of you will be shocked to know that I was out past dark tonight. I went just a few short blocks away to "A Night at the Opera" at St James Cavalier Centre for Creativity. You might be even more shocked to know that I wore a long-sleeved tucked-in shirt with tie! Soprano Rosabelle Bianchi, Pianist Gisele Grima, Clarinetist Lino Pirotta, and French horn player Charles Abela performed in various configurations, for a total of 10 songs, plus encore. Only Grima played on every number. The concert lasted about 80 to 90 minutes, I suppose, of music, with a 15 minute "interval" in the middle, and included music of Mozart, Purcell, Schubert, and others, one of whom was Maltese--Camilleri. This was my first performance to attend in the Music Room at St James Cavalier, rather than in St Catherine's Church around the corner. There will be a daytime performance one day next week--Wednesday, I think. I was drawing during the show--one drawing of the stage without the performers, another of a part of the side wall of the room--and a man sitting a couple of seats away was kind enough to tell me, after the show, that I had done a good job. I appreciated that.

I did something else today I had never done before, though it wasn't quite as delightful: I took a "hop on/hop off" sightseeing tour of the northern half of the island. Maybe it was just a bad day, but the buses were often late (if you hop off at one site, theoretically the next bus will come along in one hour to pick you up) and at the Mdina stop the bus was already so crowded when it pulled up, and so many of us were waiting, that we couldn't all get on. Fortunately they called for another bus, so that we didn't have to wait for the next normal run, but we still spent about 30 minutes that we could have been sightseeing instead of twiddling our thumbs. On the final leg, however, I talked for just a few minutes with two young ladies from Florida, who were on the island just for the day: the Disney cruise ship they were on had made a stop in Valletta. Perhaps the lowest of lowlights of the trip--worse even than not having sufficient seating--was the large group that hopped on at one stop: 9 adults and 3 children. It would be hard to say if the almost perpetually screeching toddler or the one or two loud-mouthed adults in the bunch were more obnoxious. The Floridians told me they were pretty sure that was the same crew that got into some fit earlier, screaming and presumably cursing in their language at another passenger. Yikes.

I did at least get something productive out of the trip: one of my sisters likes to collect decorative/art glass, and I took several photos at three different glass companies, so that I can email her the photos and let her see if there is anything she likes. I'm not sure if the companies would like me to post the photos, though, so I won't do that here. Malta is noted for glasswork: apparently the Phoenicians are the earliest known people to create glass, and the Phoenicians did certainly come to Malta, though I don't know if there is a direct connection there. Lace and silverwork are also Maltese specialties. And according to the recorded "tour guide" on the sightseeing bus, Maltese cotton was especially noted during the Roman empire. It seems very odd to me that such a small island could have produced a substantial amount of cotton, but perhaps the raw material was brought from Egypt or elsewhere and then worked into cotton cloth on Malta.

After the tour, I talked to my mother from a Sliema call/Internet center. Because of the time difference and her schedule on Sunday, I thought I might not be able to reach her for Mother's Day, so today was an early greeting. I also called my niece who celebrated her birthday on Monday to talk to her a bit. She said she had a good birthday, but didn't mention whether she was pleased to be 43 or not!

After realizing how expensive today had been, I decided I ought to start keeping some kind of record of cash outlays beyond having a cup of tea at Marks & Spencer, buying chips and a soda, etc., just so I'll know where my cash is going. Today I spent 15 euros on the sightseeing tour, another 15 on the eyeglass repair, 13 at the grocery, and 10 for the concert. Normally I don't lay out quite so much money in one day! And yes, I did return to Marks & Spencer for a cup of tea and a bit of Hardy reading after all my daily travels.

I'll close with a photo of a band that was playing and parading down Republic Street this morning. I don't know what the occasion was, but they were making a good noise! 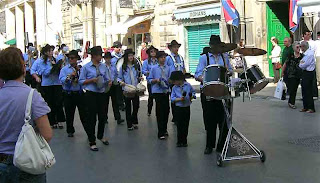 Posted by Cooper Renner at 2:09 PM

His Excellency, the Dullness of Renner, goes out on the town.

A propos your calling your mother: now that you seem to have your mobile broadband in order, have you downloaded Skype? I know that you are not a telephonic chatterbox, but if you felt brave, we could chatter like monkeys -- for free-- for as long as you could stand it.

Me got no Skype. Me scared.