Scicluna and the Ballet

I began this gray, dank morning with a visit to the head office of Heritage Malta. (Actually of course I had breakfast first, and a bit of a walk, and a shower, and even bought a luggage strap, but you get my drift.) Today was the opening day of an exhibit called "Deconstructing Michelangelo" and featuring paintings by a Maltese artist named George Scicluna. Scicluna has done his own interpretations of a number of Michelangelo's works, both paintings and sculptures. This first one here is his look at one of Michelangelo's madonnas. I took the photo at an angle to reduce the reflections from the numerous uncurtained windows in the hallway where the paintings were displayed. I like it when museums and galleries use natural light, but it's best when the paintings aren't under glass! 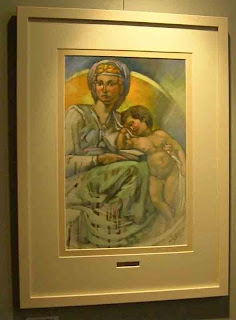 The second one, one of the pietas, I was able to shoot head on because it was in a darker part of the hallway. 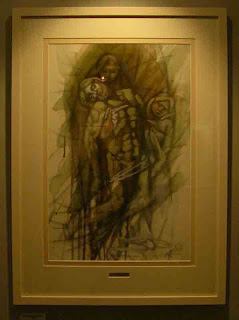 If you want to know more about Scicluna and his work, you can go to www.georgescicluna.com.

Later in the afternoon I went to another exhibit, also a freebie, though this one was in the gallery area of an arts supply store right inside the main gate of the city. In the back corner of the store, there's a spiral staircse up the gallery, which is open in the center, overlooking the floor below. While I was there, there was what looked to be an art lesson going on, one on one, but I didn't interrupt to ask if the teacher was the artist whose work was displayed. This exhibition was called "Ballet Dancers in Action", and most of the canvases, by artist Carmel Micallef, featured multiple persons embodying the theme. The style was sort of impressionistic, almost like sketches done with acrylic instead of pastel. In some of them he (she?) displayed a very impressive treatment of light, and the sense of motion was also very well-done.

About midday, after my lunch and while awaiting the Sliema ferry, I took this photo of a man fishing. Can't you just imagine what the cat is thinking?

I also managed to get a shot of a big guy who had his shirt off and was fairly heavily tattooed. Unfortunately he was too far off when I took the shot, so the photo is too indistinct to be worth looking at. If I'd been a little more gauche, I would have just stopped him, I guess, when he walked past a few minutes earlier, and said, "Hey, man, can I photograph your skin?"

I did directly ask this young guy if I could photograph him. You'll see why below. I asked about the uniform/costume too. He was actually on guard duty, for the prime minister's offices across the street from where he was standing. His uniform is the same as the knights' uniform, but he is specifically representing--he nodded toward the flag--the knights of Spain. Whether that is because the prime minister's offices are in what was the Auberge of Castille (which served the knights of Castille and Portugal) or whether they just change out the flags on some kind of rotation to represent all eight divisions of the knights, I didn't think to ask him. 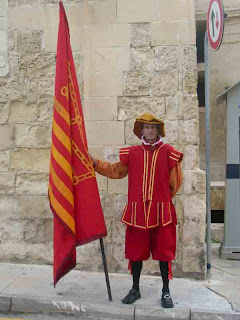 Fortunately the clouds finally broke a little before one (though this also meant the wind picked up), and then we got about 4 good hours of sunlight, before a cloudy haze moved in again and the sunlight became a kind of filtered light. It was chilly enough near the water by 4:30 or so that I was wearing both windbreakers and didn't feel at all overheated. Down by the gates, with the wind somewhat blocked, it was more pleasant. Even so, on this my last full day in Malta, I think I had one or two windbreakers on all day, if I was outside.

Yes, my last full day. Tomorrow I have a flight to London, where it will probably be even chillier, but maybe not so windy, which has been a big part of the problem in my time on this little island. Whether Malta will ever have a summer this year, who knows? But I won't be here to find out! It's off to London and then back to the states. I don't think my dream of living somewhere without a car is going to pan out yet--maybe in another year or two.

Anyway, this "internet key" I bought when I arrived in Malta for mobile broadband usage is supposed to work in England (though it will use up my prepaid allotment more quickly, I believe, as it's "roaming", or something like that). If it works right, then I should be back online tomorrow night. If not, it may be a day or two till I find a place to wifi from. So if there is no blog entry tomorrow night, don't fret! I'll be back online sooner or later, won't I?
Posted by Cooper Renner at 11:13 AM

Living without a car: What about moving somewhere Zipcar (or a variant) operates?