Today I was part of a foursome of guests from the guesthouse who spent several hours together running around. We left about 10:15 and headed for the bus terminus with Mdina and the Ta' Qali crafts village as our goals. As we headed out, it was cloudy, but I thought it might clear, as it has on other days, and wasn't particularly chilly. As the day advanced, though, the chill stayed mostly with us, except for one brief bit of sun and warmth, and we even had a couple of light showers. At one point, the sky was positively brown, not quite as much so as El Paso during a dust storm, but ugly enough. More like a May day in London than Malta. There is an English couple at the guesthouse right now who are leaving for a few days in Gozo tomorrow. The husband told us that they were planning to take the floatplane to Gozo (so THAT is what that floatplane in the Harbour is up to!), but the pilot called last night and cancelled the flight. He said winds of almost gale force are predicted for tomorrow and that he is taking the plane out of the water tonight. So they will have to take the ferry over to Gozo (and will probably hope that it's not too choppy a ride.) I am of course hoping the forecast will not be so grim!

Anyway, our foursome today consisted of Kim and Linda, the two women with whom I heard Ars Ludi a couple of nights ago; Dominique, a dancer and actress who is part of the musical production of "Dirty Dancing" now playing in London; and yours truly. We had intended to stop at the crafts village on the way to Mdina, since it is in fact on the way, but we missed the stop, since none of us exactly knows what we are doing. I was remembering the bus driving right through the village in 2007, but either the routes have changed or that is a different bus. So once we got to Mdina and Rabat, it was only about 11, not lunch time yet, and so we went first to Rabat to see St Agatha's Catacombs. On our stroll to find the catacombs, we passed a gas station where a dog was walking back and forth along the roof. I tried to get a photo of him, but he was in motion and the one I got wasn't very good. But as we rounded the corner, we saw him again. He had left the station roof and was walking atop the wall that ran out from behind it: a good six feet or so off the ground. There I managed to get this photo. 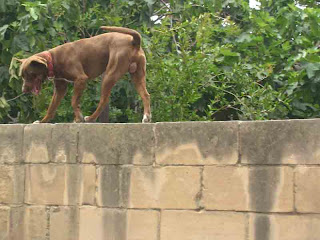 Anyway, we moseyed on, trying to follow signs but not always succeeding. At one point I asked a man at a sidewalk cafe, and he pointed us on around the corner, not too far. The guidebooks tend to rate St Agatha's Catacombs higher than St Paul's Catacombs, also in Rabat. After we bought our tickets, we wandered the small museum at the church until it was time for our time. The museum mostly contains artifacts, Greek pottery and so forth, and I'm not sure if it was all found on Malta or not. Certainly the mummified Nile alligator on display--said to be 4000 years old--is not likely to have been found on Malta. But I suppose stranger things have happened. There is also a display of Maltese money in the museum, some of which were Maltese pounds, from the days, I suppose, when Malta was still a British dependency or in the earliest days of its independence.

The tour of the catacombs was only 15 minutes long and was conducted by a young archaeologist who is working at the site. I don't honestly remember having a guide last time, but I suppose I did. He told us the tours were limited to 15 minutes both for the "health and safety" of the guests and for the preservation of the frescoes on the walls, which are sensitive to changes in humidity. Photographs are strictly forbidden! There is a small church built/carved into what is partly natural cave, I assume, with an altar, a small nave, and so forth. The frescoes here are from two different time periods, but all within the past several hundred years, certainly not dating back to St Agatha's time, about 250 CE/AD. The passageways in the catacombs are quite low, so that even a short guy like me has to duck a good deal of the time, and we had quite a tall man in our small group--certainly he was over 6 feet tall. Some of the tombs have one or two niches for adult burials, along with others for infants. As the guide pointed out, as many as four of five children might die before reaching one year old in the times when burials were being conducted here. Other tombs are long ones for adults, with the niches side by side. Some of the niches do indeed have bones in them, but they weren't found right there in place. The bones were instead for in an ossuarium within the catacombs: a place where the bones of many people had been gathered. Archaeologists selected some of them to be put back into burial niches as representations of what had once been there. The archaeologist said that the tombs had been looted long ago.

Down deep there is what seems to be a little chapel, also with some wall decorations. This area and these decorations are presumed to be more than 1600 years old, going back to the century after St Agatha lived. The simple fresco art here seems to be symbolic, he explained, but because there is no writing connected to it, and certainly no surviving documentation about it, the scientists can only surmise.

Then we wandered on, just sort of following interesting looking streets and going in the general direction of the main gate to Mdina, until we came out to the Howard Gardens, and then I knew where we were. We went along into the "silent city", not succumbing to the man wanting to sell tourists a book of the history of Mdina, or the men wanting to take you for a ride in their horse-drawn carriages, or the hawkers for the Mdina Dungeons and the natural history museum. Kim and Linda wanted to have something to drink and a dessert (in lieu of lunch) at the Fontanella restaurant on/in the walls, more or less on the east side of the city. So we found it--in 2007 I had a cup of tea and a piece of cake there myself--and we arranged to all meet up again in an hour. The two of them went into the restaurant and Dominique and I went on just a little farther to where there is an open plaza and a great view out to the east and north of island. We were able to spot what I'm pretty sure is the teeming mass of the cities clustered around Marsamxett Harbour and the Grand Harbour, and we saw the Mosta Dome, which was the landmark that helped me be pretty sure of the Valletta location. Then I went back out to the Howard Gardens to have my little picnic lunch--tuna, applesauce, tomato juice, potato sticks and a muffin--and Dominique roamed the city for a while.

After we all met up again, we decided not to take the little tourist train that gives a tour of and history of Mdina, Rabat and nearby Mtarfa, but to go on to the crafts village instead. My number one goal here was to buy a glass head that one of my sisters and her husband, who collect glass, wanted me to get for them. So I got the head purchased and wrapped solidly in bubble wrap and a box, while the ladies looked around the village shops as well. Dominique wondered if we could actually watch the glassworkers, and we were told yes! But the men had just gone on break. We browsed a while, sat for a while at one of the cafes and rested, then headed back to Phoenician Glass where I took these photos. The first one, which is mostly quite dark, shows the oven the men draw the molten glass out of. 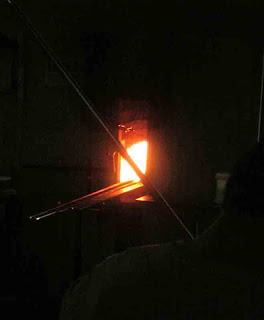 Then this one shows the glowing blob one of the men drew out, to make a vase from. 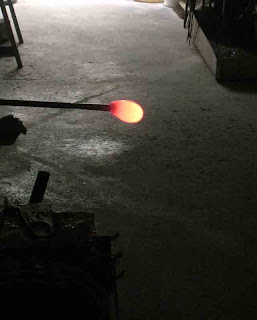 In this third shot, he has already shaped the vase and is inserting a rod into the narrow top to create the opening. 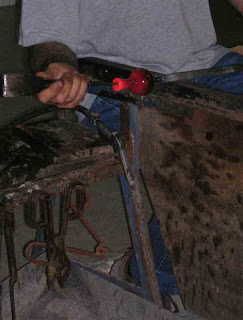 This final shot is posed. I just missed getting a decent shot of the man actually blowing through the tube into the glass, so he lifted the tube to his mouth again and posed for me. Even though it was cool to chilly day, they had several fans going in the work area, to offset the heat coming off the oven.

Well, Kim and Linda return to England tomorrow, and Dominique returns on Sunday. I hope I meet some other guests in the coming week who would like to pal up and do some things. If not, I will be on my own. I will likely go back to the National Library for a while at least and try to get some useful information from the book on "amusements" for convalescents. I am also pondering the long bus ride to Cirkiewwa, and then the ferry ride to Gozo, and then the hop-on/hop-off bus for Gozo. Even though I wasn't entirely satisfied with my hop-on experience last week, I think this may be the most economical and practical way to see some of the sites along the coast of Gozo which I didn't see last time. And maybe the Gozo ride won't be so crowded anyway. I also need to do the free harbour cruise which I'm allowed due to buying the hop-on ticket last week. I believe that cruise leaves only at 3 every afternoon from Sliema. In either case I only want to make the journey if the weather is nice. The Gozo trip would be a long day, but I don't think, at this point, that I want to go to the trouble of packing up and leaving here for an overnighter or two there.
Posted by Cooper Renner at 12:21 PM

Did you by any chance find out what the significance of St. Agnes might be in Malta?

Do you think the glassblowers are real Phoenicians?

I think the glassblowers are real Phoenicians. You bet. And friendly ones too.

From the shores of Tripoli?

No, sorry, I misread it as Agnes (must have her on my brain). I'm grading finals, so I'm not responsible for anything I say or write.

I think from the shores of Tyre.

St Agatha is actually Sicilian, but she spent a bit of time here before her death/martyrdom. Her story is quite gruesome.