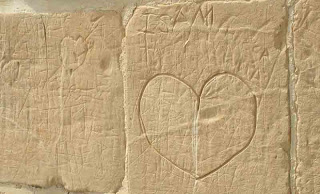 Sundays are pretty quiet in Valletta, except for church bells, and one could even wish more stores were open--at least Marks & Spencer and its cafe! My first Sunday here, two weeks ago, I had the Valletta Grand Prix to keep me occupied a good part of the day. One week ago, I took a harbour cruise and also went to look at cars at the Malta Ford Show (admittedly not terribly exciting). So today--what to do today besides draw and read? Well, of course there was the 11 a.m. performance at St Catherine's, but as these concerts only last about 45 minutes, there's still a lot of day to fill.

Before the concert, I went to the Upper Barrakka Gardens and worked on a drawing--looking again at an angle on the arches there, and because--amazingly!--the wind was down and I was actually able to sit there, in the morning, OUTSIDE, without a windbreaker, I attached a little story to this drawing about a military officer, presumably British, on post somewhere the wind roars 364 days a year. And I suppose I'll stick the drawing in here, since I've mentioned it. Mostly it's just arches. 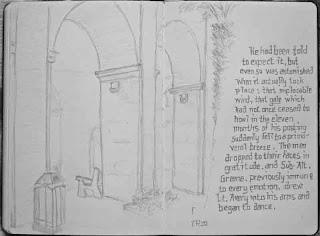 I also took a few nature-y kinds of shots. This first one is of a tree and marker which I hadn't consciously noticed until today--though surely I must have seen it, as many times as I've been in the Gardens since coming here. The marker says the tree was planted in November 2007 for Queen Elizabeth II and Prince Philip's 60th wedding anniversary. Malta was, of course, a British territory (or whatever it was called) when they got married, and in fact for the first decade of Maltese independence it considered Elizabeth its queen. 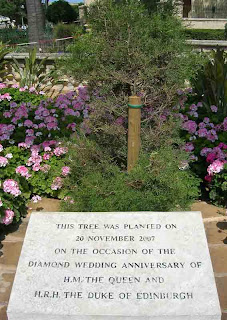 I also got a couple of decent insect photos: a butterfly on a flower (a buttercup?) and a bee on the same kind of flower. I don't normally do flowers, but these I found a little more fun because of the bugs. 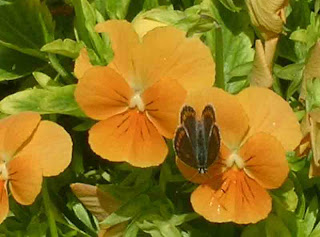 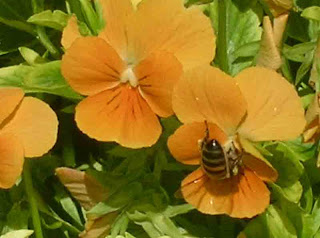 Then it was time for the concert, "Homage to the Baroque Masters". This morning there were three pieces performed: first a Handel sonata, with Sarah Spiteri on violin and Alex Vella Gregory on harpsichord; next a Telemann cantata with the above two, plus Albert Buttigieg, a bass singing the lyrics; and finally Spiteri on violin and Vella Gregory on piano, playing a "chaconne" by Vitali. I don't recognize Vitali's name, and though Spiteri explained what a chaconne is, I didn't completely get it. It was, despite my ignorance, a fine performance. I drew during part of the show, the three performers sketched loosely.

After the concert I stopped back by Cafe Deux Baronnes for a late morning cup of tea--it was almost noon, and I knew the Saluting Battery performance would be going on then. Unfortunately from where I sat I couldn't actually see the performance, though I had a glimpse of parts of a few of the cannon (there are 8), but I could hear some of what was going on, most DEFINITELY the firing of the cannons, and of course I could see and smell the smoke they put off when fired. After I ordered my pot of tea and went to sit down, I saw a woman with an order of chips (fries) and I could see that they were nothing but fat slices of potato cooked, so I ordered some too! They were good. When I left the cafe, I got some chicken roll and a Perrier at Wembley's and went over to Hastings Gardens to have them as part two of my lunch. (Part three was a bottle of tomato juice when I went to the guesthouse to switch things around in the backpack.)

Then I went on to the National Museum of Archaeology. I've been putting this off, partly of course because I've been there before and didn't know if things would be different, but partly also because I figured I needed to keep something aside for a day with little else to do--like today. I spent about an hour there and did some rough sketches of some of the artefacts and displays. It can be quite difficult to sketch, standing up, holding the drawing book in the left hand while sketching with the right. And it's quite tiring for the left shoulder and arm too! But I got some information--especially on the layout of a couple of the Stone Age temples--which might come in handy for one of my Maltese werewolf stories. In fact, I decided that one of the temples could be interpreted as a visual representation of a wolf's paw on one side, with two human feet on the other side. So that could be a very interesting thing to work into a story.

By now of course it was certainly time for more tea, so I went back to Deux Baronnes. And of course I spent some more time in the Gardens, reading and resting and getting this photo--another to add to the series of Lower Barrakka photos taken from Upper Barrakka. In this case, what makes the photo different is that a cargo ship was leaving the harbour as I took the photo. This ship--blazoned DYVI ATLANTIC--was at least nearly as big as the Celebrity Equinox, maybe equal in size. Of course it's not very attractive to look at, with mostly blank blue or white sides. Who knows what was loaded inside?

I've been feeling, off and on since yesterday afternoon, a little bit like I'm trying to get a sinus problem, but I hope not. Maybe there was just something in the air. Certainly later this afternoon a cloudy haze moved in and chilled the air a bit. But today was warmer at least part of the time, and I was able to shuck the windbreaker. At other times I had the windbreaker on and was wishing I had the second one with me as well. Very weird May.
Posted by Cooper Renner at 12:04 PM

Perhaps the Saluting Battery performance requires a warning similar to this: http://www.clusterflock.org/2010/05/regarding-todays-show-for-rick-and-danny.html.