Chris Watson: Whispering in the Leaves 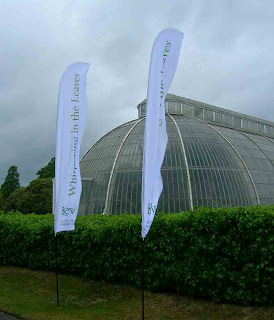 Today's highlight, and one of the highlights of the trip, was attending Chris Watson's "Whispering in the Leaves" in the Palm House at Kew Gardens, in Kew, not too far from London. Watson, once a member of an English band called Cabaret Voltaire, now creates sound collages from environmental recordings he makes--in a tropical rain forest, for example (as with "Whispering in the Leaves"). "Whispering in the Leaves" is actually two recordings, around 20 minutes each, created specifically for the Palm House, the gardens' glasshouse reproduction of a tropical rain forest, and intended to play throughout this summer. Today was the debut. One of the recordings, called "Dawn", plays each hour of the morning that Kew Gardens are open; "Dusk," plays in the afternoon. For the debut today, Watson came to the Palm House for a 1 p.m. performance of "Dusk" during which he "played" his existing tapes to create a performance different from the recording which will normally play. A thunderstorm was included in the collage, especially appropriate since today was a rainy, chilly mess of a day. Here's a photo I took as he and an assistant worked with the setup before beginning the show. Watson is on the right. 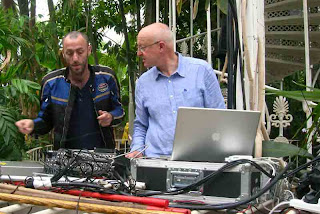 After the show I got a chance to talk to Watson and asked if the recordings would be released by Touch Music, a UK company which has released others of his works. In this case, he said no, because the recording is designed with the Palm House in mind, designed for this specific environment, and he feels it would lose too much, separated from its setting, which plays through 80 (or was it 90?) speakers mounted in the glasshouse. I showed him the drawings I made before and during the performance and told him I would send him photos of them if there was an email address at his website. He called over one of the Touch Music employees, and then a few minutes later, the label head, and introduced them. I told them I had found out about the performance either from their email newsletter or website, which I have bookmarked on my computer. Mike, the label head, told me the US is their best market and they are looking into expanding into the US. They gave me the email address so that I could send them the drawing photos. It was a lot of fun.

Palm House is only one small part of the gardens which are a huge park, over 150 acres, with grounds for wandering about in (on more pleasant days than today), and a number of special buildings for specific purposes. Palm House is the tropical rain forest glass house. Another glass house features temperate plants, and another has about 8 or 10 separate climate "zones" in it, including a couple designed to attract and nurture butterflies. Here's one of the photos I took there: 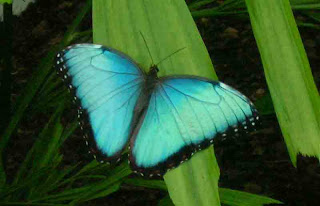 and another, of the chrysalis box, which sort of gives me the creeps: like a science-fiction movie version of a cloning chamber or something: 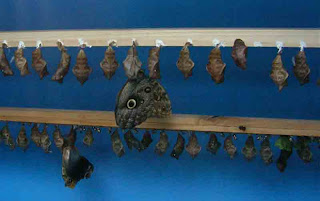 Beneath the Palm House is the "marine" area, with aquariums for plants as well as fish. It's not a large exhibit, but it's pretty cool that one of the aquariums has two seahorses in it. This is the best photo I go: they are cagy little critters. 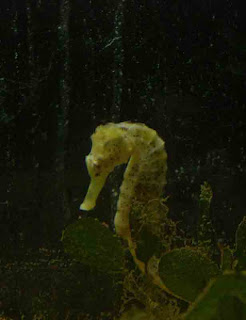 Another aquarium had a peculiar little ringed fish that looked like a worm except for its tail, flattened and slightly broader than the rest of its body. Its head was the smallest part of it. In another aquarium were several of those fish, which are also shaped like worms (or snakes if you prefer) and burrow tail-first into the sand, which they were doing as I watched. It looks almost like a magic trick.

There is also a gallery building which features botanical paintings, going back as far as the 18th century; a pagoda; a few "temples"; and a "minka" house, which shows the traditional way houses used to be built in Japan, with thatched roofs, wood-beamed walls, and so forth. Resistant to, and easier to repair after, earthquakes and typhoons, as well as environmentally sound. The bamboo garden is around the minka, and there's also a 'rhododendron dell', which enormous plants, nearby. There was a non-rainy patch in the middle of the afternoon when I wandered some of these areas. But for the first 3 hours, more or less, that I was at the Gardens it was either raining or misting and it wasn't lovely to be outside. In fact, it wasn't terribly pleasant to be inside either, in the Temperate House, because even with the low temperature, wind and rain, they had the doors and some of the windows open, letting the weather in. Too cold for me. (In fact, I'd argue that it's quite a stretch to call England's climate "temperate" at all. Hehehe.)

The Gardens were founded in the mid-18th century, and they started putting in the glasshouses in the 19th century.

I spent the biggest part of the day there, or in Kew itself, where both before and after visiting the Gardens I had tea and snack. The train station is quite near, and Kew itself looks more like what we Americans probably think an English town ought to look like than London. The houses near the Gardens, even though they were mostly joined to others, like condos kind of, had small yard areas and driveways, and were made of that red brick so common in England. The couple of main streets near the train station (it's actually part of the London Underground, but it's above ground here) have small shops and restaurants, which cater as much to tourists, I imagine, as to locals.

It would have been a fine day for sunshine and a bit of warmth, since there is so much to see outside at the gardens, but it was not to be. It was a miserably ugly day, weather-wise, perhaps second only to the day on the ship when we weren't able to dock in the Azores because the swells were so bad, and certainly the ugliest day I've had yet in England, much like a bad day in February in Texas. I knew I'd almost certainly have chilly weather here, and I figured I'd have a great deal of cloud cover. But I'd hoped at least to get out of the wind which haunted both Malta and the cruise. But it hasn't happened yet. The wind in London hasn't been as strong as the wind in Malta, but it has blown day after day, probably 10 to 15 miles per hour, most of the day. Oh well, perhaps when I get back to the States, I'll learn once again what it feels like when the temperature soars to 75 degrees. I include this final photo, simply for the chuckle. This poster actually advertises the Palm House, if you can make out the small print, but I certainly had to scoff at the idea of "feeling the heat" here in England. 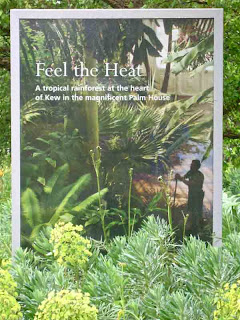 Posted by Cooper Renner at 1:16 PM

I'm delighted that you seized an opportunity to chat with Watson et al.

oh my! I love love love seahorses & aquariums. how great!