Today was unquestionably the coldest and most repulsive day yet in this cold and repulsive May. Last Friday was probably visually uglier, since we did actually get some late afternoon and evening sun today, but last Friday wasn't nearly as cold as today, and there was no thunderstorm last Friday. Dr William Domeier, in his 1810 book for invalids who might need to come to Malta to convalesce, says that thunderstorms are "rare" in Malta. Not rare enough. I was in Marks & Spencer having afternoon tea when the thunder boomed, quite loudly, a couple of times. I don't know how much rain accompanied it, since there isn't much of a view from the Marks & Spencer cafe, but I got up once and went to the door to look, and rain was coming down then.

The five-day forecast in today's "Times of Malta" predicts that BY MONDAY the temperature should actually be at or near normal. If that actually happens, it may be the first time since I have been here.

Anyway, it was a repulsive day, and so I don't have any lovely photos to share with you. I browsed some more this morning--when it wasn't sprinkling--thinking of possible gifts, and I got my sister's birthday (two weeks from today) gift in the mail. Then I went to Marks & Spencer for my morning tea and read.

Today's highlight was the 12:30 performance at St Catherine's. Today it featured Clare Ghigo singing arias from operas by Handel. She has a lovely voice, and the melodies were quite nice as well. You would all probably recognize "Lascia che io Pianga", one of those famous operatic tunes we know but don't know we know. (At least that was my reaction.) Her accompanist was Alex Vella Gregory on the piano. He is a young composer who also operates a Maltese interest group of Facebook. I worked on a sketch while they were performing, and since I don't have photos I'll give you a small version of the sketch. 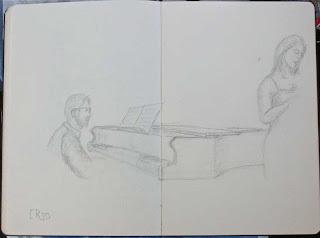 After the performance, it was raining lightly so I went back to the guesthouse to get my umbrella and my second windbreaker--yes, it was that chilly--and instead of leaving immediately for the National Library (my next stop) I spent almost half an hour transferring clothes and things from the old broken-wheeled suitcase to the new suitcase to see how that was going to work. The new bag is larger, and it's really too large for what I am carrying, but I decided that is better than always having to squash things into the smaller bag. I can use some shopping bags and things I have bought here as padding if the contents are too loose, come time to board Air Malta for London.

Then it was off to the National Library for some more research. To some extent I did this just because it was something I could do inside, and I didn't want to be outside. But I got a lot of useful information about Malta in the early 19th century, some of which may come in handy for an upcoming novel, especially an episode when some Maltese soldiers mutinied against their British officers in 1807 and briefly occupied Ft Ricasoli. I also noticed, as I was leaving, their small display cabinet of National Library publications for sale. I don't really need to be lugging around any more books, but they have a 5-card set and a 10-card set of postcards, and I think one of those sets would be nice. Unfortunately I didn't have change for a 20 euro note, and neither did the man in the admin office, so hopefully I'll remember to go back by there tomorrow and pick up a little pack.

Then it was off to Marks & Spencer for the afternoon tea, and that's when the rain came. Holy cow. The M&S location here is sort of strange. It's in two different buildings. The main entrance faces St George Square and that part of the store has two or three levels--I can't really remember--and you can go through its first aboveground level and across a bridge into the other part of the store, which has more floors, and also has an entrance onto Strait Street, which is a very narrow street (It lives up to its name) that looks more like an alley. The cafe is on the ground floor there, and the street is no narrow and the buildings are so tall that you can't really tell what the weather might be outside. The street is almost always in shadow. But the thunderclaps echoed really loudly down that street, and it really surprised me because there had been some clearing before I went into the store.

I stayed there long enough to buy two cups of tea, read a while, and even browse the "store copy" of the newspaper, which is why I saw the five-day forecast. By the way, the whole time I was in the store, I was wearing both of my windbreakers, and I never got too warm. If it's pleasant and warm on Monday, no one will be happier than I, but I'm not holding my breath.

When I left the cafe, the sky was actually mostly clear, though the wind was very cold and strong. For several minutes I stood in Great Siege Plaza, which is somewhat blocked off from the wind (no place in Valletta is entirely blocked off from the wind, at least not this year), and in the sunlight, just trying to get a little bit warm. Then I moseyed on to get some food for supper, which I had in my room at the guesthouse, since I didn't want to fight the cold outside. I did get out again, though, and go to the Upper Barrakka Gardens where I read a bit, touched up the St Catherine's sketch a bit, and tried to get enough sun or enough wind blockage to be almost warm. Not really possible. Sigh.

Anyway, here's your other drawing for today. This is the one I did yesterday or the day before in Upper Barrakka, looking through the arches toward a snack kiosk. 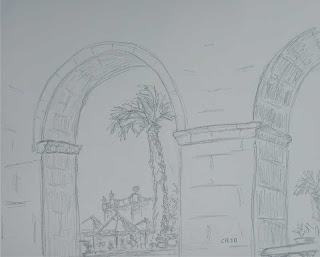 If St James Cavalier hadn't cancelled the showing of an Egyptian movie called "Al-Mummia" ("The Mummy") I'd probably be over there right now. Instead I'm writing to you!
Posted by Cooper Renner at 11:50 AM

Are you going to the M&S in Valletta or Sliema?

I think when you get to London you'll like their Simply Food stores--and they're all over the place.

M&S in Valletta. The store in Sliema doesn't have a Cafe Stretto.

Is Simply Food an M&S branch? If so, I'll probably be buying my 'picnic' lunch there a lot of the time.

Yep, it's their food-only shops, mostly around train and tube stations, but really all over the place. There are also Waitrose and Sainsbury's shops too, though I don't remember what their quick-trip type places are called.