All right, folks, I think I've been pretty patient so far, but I've had it. This May in Malta is more like March in Texas. We have had rain; we have had high winds at least half of the days I've been here; there has been only one day, I think, when I didn't need my windbreaker at any point, and yesterday and today my sweatshirt might have come in handy. I guess the brief and shining moment that was Camelot was last night around 11 o'clock when, after a downpour (which I missed, being inside), the winds shifted to the south and were still quite irritating, but were at least WARM. It was probably the warmest it has been since I have arrived, at almost midnight last night. Today back to chilly to cold winds, roaring all day, though we did have sun. I feel like the cruise weather has followed me: I want to sit outside and read and draw, but it can be mighty difficult to find a warm place out of the wind. Sheesh.

Okay, that's off my chest.

Anyway, this little group of about six was making music/noise and marching down Republic Street this morning about 9:45 or 10. The banner, which you cannot see because of the wind whipping it around, says "World Fest '10". I don't know what World Fest is, do you? The guy farthest to the left is also holding some kind of poster, but I couldn't make out what it is: a performance of some sort, maybe? 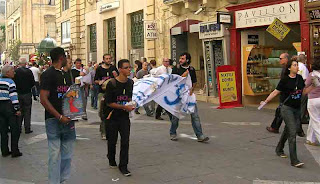 Kim and Linda headed back to England this morning, but they gave me their email addresses so I can contact them once I get to London, if I think I might have the time and energy to make it down to Bournemouth to see the sights.

I spent 45 minutes or so before lunch in Marks & Spencer having a cup of tea and a muffin and working on a drawing. They didn't seem to mind my hanging around so long: there wasn't a big crowd needing the table space. Then I went to Wembley's for another packet of "chicken roll" and some apples for my lunch. I stopped by the guesthouse and got my tomato juice and the remains of my package of PomSticks, and headed up the hill and around the corner to the Upper Barrakka Gardens. I was able to find a place where the wind wasn't too bad, though I had to sit right out in the midday sun, rather than in the shade to do so. While I was eating, a couple from the guesthouse came through. They had been to St John's Co-Cathedral this morning and were heading to Mdina for the afternoon. Tomorrow is their last full day here, and they were lucky to purchase tickets to the Hypogeum before they left Canada, so they will go to see it tomorrow. The Hypogeum is one of the premier prehistoric "structures" of Malta. Probably an expanded natural cavern, used possibly both as temple as well as burial ground, and in use for a number of centuries (millennia?) a very long time ago. Only 10 people at a time are allowed inside on the guided tour, and there are only 7 or 8 tours a day.

From the Upper Barrakka Gardens I took a photo looking east and a bit north toward the Lower Barrakka Gardens out toward the end of the peninsula. You can see this photo is kind of washed out looking: the air is somewhat hazy. Whether that's because of the wind or the humidity, I don't know. Anyway, this maybe gives you some sense of the size of the defensive walls of the city. That temple-looking building, just left and a little above the center, is the memorial to the first British governor of the island, Sir Alexander Ball. He's the one the poet Samuel Taylor Coleridge worked for for a while. And just a bit to the right of center, and farther away than the Ball monument, is the top of the Siege Bell monument. It's that shallow-domed building. It's not in the Gardens, but is across a road which is a good distance below the level of the Gardens and the Siege Bell. If you look closely you can see where that road turns left and vanishes behind the walls. This road was part of the route for the Valletta Grand Prix last Sunday and from the Gardens you could look down--I guess it's at least 100 feet, maybe more, to the cars as they zoomed past. Later in the day I went to the Lower Barrakka Gardens and worked on a drawing of a couple of the arches in the gardens, with the Siege Bell behind. 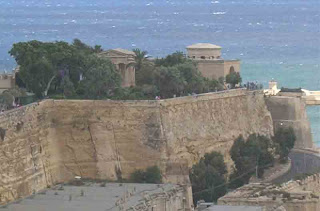 This photo is taken inside St James Cavalier Centre for Creativity. It's a large sculpture from 2004 done by an artist named Raphael Vella. I can't remember the name for sure: something like "A Horse for the Names of God." It's a tall--maybe twelve to fifteen feet--metal clothes-horse with sixteen or eighteen metal "books" hanging on the rods, each of which has one of the ways of saying God in various European languages cut into the cover. It was created in response to a controversy several years ago about the fact that a proposed constitution for the European Union nowhere used the word God. 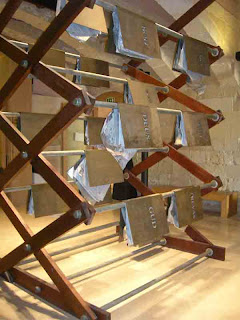 These next three photos were all taken from the either the Upper or Lower Barrakka Gardens. The first shows a sailing ship, possibly one of the ones that sails tourists around the harbours and gives them a meal, in the Grand Harbour. You can see that this photo too has that "distant" look, like there is some kind of film between us and it. 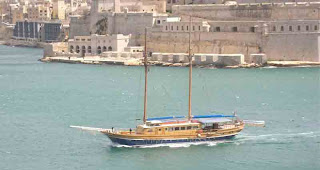 This next one is a cruise ship called Amadea leaving the Grand Harbour. For whatever reason, this photo is much brighter and cleaner. Maybe it's not the haze, but my camera. Or maybe the sky had just lightened a bit by the time I took this one. You can see that this cruise ship looks to have about 7 decks of cabins, maybe 8. So this is a good bit smaller than the ship I made the transatlantic crossing on. It may of course do nothing but Mediterranean and maybe Baltic cruises, and may not need the additional size for smoother oceanic crossings. I don't know what cruise line it's from, though the logo seems to be a bird in flight, if you can spot it on the rear, blue smokestack.

And finally in this shot I am looking down at the area where they perform the Battery Salute every day at no0n. They were getting it ready for a celebration of Toyota's 50th anniversary in Malta One of the men getting things ready told me that Malta was Toyota's first European market. The car in the lower part of the photo looks too big to be a 1960 era Toyota, but I wasn't able to read the name plate on the front fender, as I looked down from the upper level of the gardens. While I was sitting up there reading, the drummer was warming up and making a lot of noise, and now--it's about 8:45 p.m. here--I can hear music through the window, which I assume is coming from that celebration. 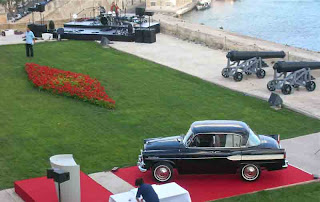 Well, it wasn't a terribly exciting day, was it? I kind of took it easy, after all the running around of yesterday, and tried to stay out of the wind. Oh, and I bought a new book. I'm just about done with Thomas Hardy's "The Return of the Native", and next up is Mary Elizabeth Braddon's "Lady Audley's Secret."
Posted by Cooper Renner at 12:06 PM

The difference between me and Renner: I would have eaten all the Pom Sticks in one day.

Wembley's only had paprika PomSticks so I had to get Pringle's instead. I will hope to find regular PomSticks tomorrow at Hollywood Grocery.

Nah, the PomSticks bag is 100 grams. That's at least 2 servings, if not more.

Hello, My name is Michael and I maintain a website all about old Toyotas. A friend forwarded me your blog entry beacause of the Crown photo you have (yes, it is a Toyota - Toyopet Crown). I would like to ask for permission to use your photo of the Toyopet Crown for a story for my website. My email is toyotageek[at]yahoo[dot]com. Thank you!