A bit of serendipity led me today to the Classic Car Museum in Qawra on St Paul's Bay. I went to the tourist information office this morning to see if they had a flyer or anything on the cave and museum down south, near Marsaxlokk--it's called Ghar Dalam or something like that and prehistoric animal bones were found in it. As it turns out, the office had nothing on the cave, but I did see--not for the first time--the flyer for the Classic Car Museum and decided to go there instead. Many of you haven't known me long enough to know how enamored I was of automobiles when I was just a kid.

So I got on the bus to St Paul's Bay--Qawra is the end of the line--and rode for about 45 minutes. You understand that nothing is very far in Malta, but the bus rides can still take a long time, both because of their stops and because of road conditions--traffic, slower speed limits, narrow roads. I read some of the time and some of the time just looked out the window. I had never been to Qawra before, except passing through it on a bus. St Paul's Bay is considered a very touristy area, and if I wasn't going to go to the beach there didn't seem much point in going there. It's not awash in historical sites or anything. But when I got off the bus and started walking, I thought maybe I should have spent some time there, just because of its touristy-ness, which means more shops and cafes, more things open, etc.

My first stop was Quandero's Coffee Shop. At first I thought I would just have a pot of tea before going to the museum, but when I saw jacket potatoes on the menu, I asked about how they were prepared--plain!--so I decided to have an early lunch--or lunch, part one. It was a great little place, with the biggest pot of tea I've yet had on the island: which is to say, the pot wasn't any larger than normal, but it was supplemented by a stainless steel pitcher of hot water. So I got 2 and a half or 3 cups of tea out of it. And the jacket potatoes were good too. So next time you're in Qawra, on your way to the car museum, stop in here: 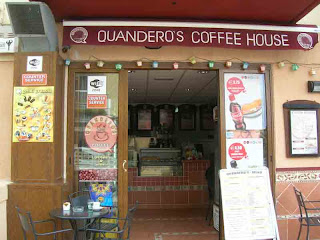 The museum was only a block or so farther up the street. Another great place. Two floors of cars, mostly from the '50s, '60s and '70s, including two which raced in the Valletta Grand Prix on May 9. The Triumph TR6 on the right in the photo came in second, and the MiniCooper placed somewhere in the low 20s. I'd like to think my little sister might have one of the TR series some day, since TR is her initials.

And here's a 1962 Corvette which placed 3rd in the Concourse d' Excellence (or something like that) a couple of days before the race. I think that means it came in third in a beauty contest? Smitty, one of my friends down in South Texas, would love to own this own.

One of the first cars I saw upon entering the first exhibition floor was this one, a 1957 BMW Isetta 250. According to the information on the car, the Isetta was introduced in Turin in 1953 and there were later several companies that had the right to manufacture the car. BMW was one of those. When I was just a kid in Cockrell Hill, we saw one of these one day--more than 45 years ago!--and I still remember it. It was so small, compared to American cars of the time, and of course the whole front end was a door--it made quite an impression on me. I don't know, however, if it was a BMW Isetta or one of the other versions. 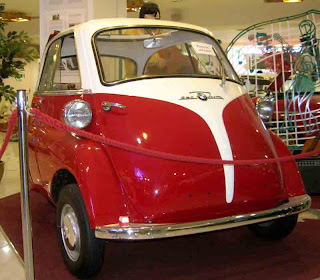 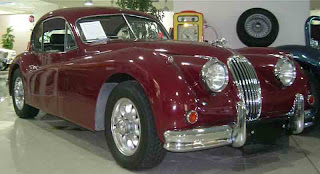 Cars like this have a lot to do, I suspect, with why I don't care anything about the new, so-called performance vehicles. They just don't match up to the beauty and glamour of these old ones. Boy, did I love MGs, particularly the "classic" MG and the MGB-GT of the early '70s. Even I would love having a car if it were a classic MG.

And here's one for Nancy back in Dallas. This is a 1953 Austin A40 Somerset Coupe, which was used by Queen Elizabeth II on her 1952 visit to Malta. 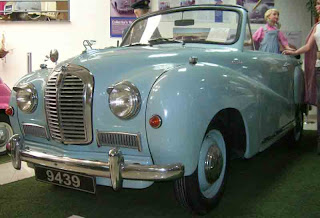 The museum also has a lot of "period" items around the cars, to add to the ambience. This photo is for my old buddy Steve. Steve, that's a Grundig reel-to-reel tape recorder sitting on top of the old TV. The only thing I could find on the TV that looked like it might be a brand name was "Rediffusion" I bet a lot of us remember console TVs that looked something like this one. 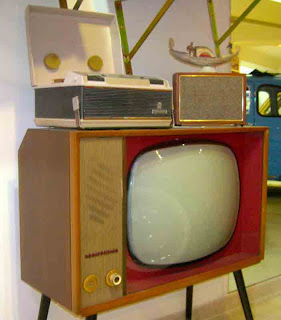 After the museum, I thought I might wander the St Paul's Bay area a bit, but the wind was roaring (no surprise there, eh?) and the bay was really choppy. I suspect it may be choppier than Marsamxett and the Grand Harbour anyway--it looks a great deal more open to the sea than they are. It's much wider at its mouth than the Grand, though not as long. So I got on the bus and headed back to Valletta. I figured I could maybe do some drawing and have afternoon tea at Marks & Spencer while starting my next book. (I had finished Braddon's "Lady Audley's Secret" while having lunch at Quandero's. If you like Dickens and Wilkie Collins, I think you'll like "Lady Audley" too. I definitely recommend it.)

On the long ride back to Valletta, I read a bit on a short book I'm doing for review, drowsed a bit, and looked out the window some more. At one point--possibly it was in Birkirkara, possibly another town even closer to Sliema--we drove through quite a nice section of road, wider than roads often are here, and with a lovely sidewalk with regularly placed trees along the way.

I finished up my outside day at the Upper Barrakka Gardens, as I often seem to, with both windbreakers on while I had my little supper--tuna, applesauce, PomSticks--and read my book. I also watched one of the cruise ships going out to see, and this one presented a chance for me to show you how narrow and guarded the entrance to the Grand Harbour actually is. In this first shot you can see the cruise ship (of the Costa Pacifica line) with (once again!) the Lower Barrakka Gardens and the Siege Bell as it passes behind them toward the break in the breakwaters. 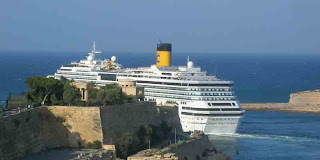 And then in this shot you can see how much the ship has to turn in order to make the actual exit between the breakwaters. It's kind of amazing of course that the ships can maneuver so easily, but after all they have propellers that can move them sideways, instead of forward or backward. What an enormous piece of equipment to move so comparatively nimbly! 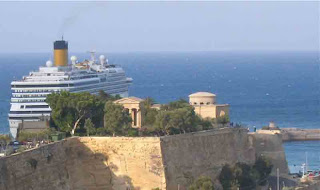 Just a few minutes later, while standing at the railing overlooking the Saluting Battery, I heard a young man talking about American places and sounding American, so I asked. He was indeed American, just visiting a couple of days with a friend from graduate school a few years back. She was Finnish, but has been living in Malta for 3 years and working here. We talked for several minutes, before they had to leave for supper. He mentioned that he was flying back to the states via Dublin and Chicago--though he lives in Arizona. Those were the cheapest hubs for him, he said, flying Ryan Air.

For those keeping score, yesterday's high was 64 degrees! Holy cow, no wonder I was cold. Today was much sunnier, and some warmer, but still only 68. I hope I live long enough to experience 80 degrees again.
Posted by Cooper Renner at 12:17 PM

Our strange neighbor adores cats and had them everywhere in her house. As if the dozen live cats were not enough, in every room in her house, she has framed prints, large and small, of the blessed animals.0
She says that she orders her canvas prints, like this one
http://en.wahooart.com/A55A04/w.nsf/OPRA/BRUE-8BWPVF by Franz Marc, from wahooart.com who delivers them. Perhaps they can take away a cat or two as well.