Tonight I attended a performance at the Manoel Theatre, the knights' old theatre, about 250 years old, if my memory is right. There's seating on the main floor, just a little lower than the stage, then three tiers of boxes, each with four chairs in it, and then the gallery, with a sort of padded bleachers, just under the roof level. As the theatre is quite narrow, only about 20 seats across at floor level, the angle that you look down from, way up in the gallery, is pretty steep.

The acoustics in the place are amazing. The performance was called "Percussionista da Guardarte" (Watching the Percussionist) and the ensemble is Ars Ludi. Or maybe the four-man ensemble is Percussionista da Guardarte and the concert was called "Ars Ludi." One way or another, it was a percussion concert. The men played on glockenspiels, the most conventionally musical instruments of the evening, as well as various kinds of drums, plates, saucers, chairs, a dining table, the upright stem of a music stand, the stage floor, and the wall of the theatre. They also stamped their feet, clapped their hands, and slapped their thighs and the backs of their hands for one number. For the number using plates and saucers, they sat at a dining table, which they also played. The second half of this song was vocal, with them mostly saying what sounded like short words or syllables, possibly based out of a rhyming couplet which began, "Happily ever after the world is flat." I didn't catch the second line, probably because of the speaker's accent. The band is Italian.

The first set was the more "classical" set, including what sounded like Mozart's "A Little Night Music," the William Tell Overture, and the Sugar Plum Fairy's song from "The Nutcracker". (Keep in mind it can be a little difficult to be sure you are recognizing something played entirely on percussion, even if that includes glockenspiels.) The second set, after the intermission, was a bit more avant-garde, beginning with a piece that sounded like it might have been by Steve Reich. All four of the musicians played drums on this one, though one of them principally played a glockenspiel. Some of the drumming on this one sounded like a rock band. On one song in this set, they all played what looked like bongos--though they were playing with sticks--and about halfway through, the lights went down, and the sticks glowed in the dark. Then the sticks stopped glowing, and the musicians' right hands glowed. Then some of the sticks started glowing again and two of the hands stopped glowing. It was a cool visual effect.

The whole show, with intermission and encores, lasted about 90 minutes and cost 10 to 20 euros, depending on where you sat. The two English women and I, who went together from the guesthouse, opted for the gallery and the cheap seats, so it was a bargain. A performance like this, in a setting like this, would probably cost three or four times this much in most countries. It's interesting too that the performance was not considered rock or pop, but instead "classical" (or avant-garde classical.) Yes, they were performing using sheet music!

Otherwise today I took it pretty easy. I took a 30-minute or so walk this morning before cleaning up and officially starting the day. I had tea at Marks & Spencer twice (once with muffin), while reading Thomas Hardy. And I sat at Great Siege Square (Pjazza l-Assedju l-Kbir), on the northwest face of St John's Co-Cathedral and drew. (Here's one of the drawings--folks lined up to go inside and see the cathedral.) 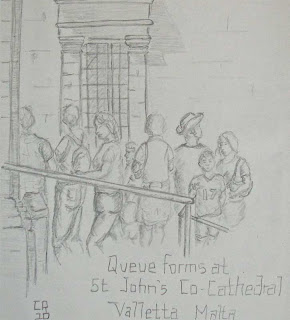 While I was drawing a little girl, and later a little boy with her, came and looked at what I was doing. I think they were English. They had these little jumping spider toys on a string that are for sale just a few yards away.

And hey, the electricity just went out! Fortunately the rooms and the halls have some kind of emergency light system--there's a small fluorescent tube burning now in the room. But the buildings across the street still have light. And now we have light too. Good. I don't think we ever had an outage when I was here before.

I took a few pictures today, but not really of touristy things--some of the signs on buildings. I thought you might get a kick out of the way Maltese mingles words from various root languages, much as English does. 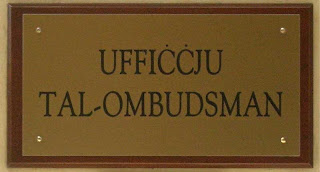 And this one just struck me as being a funny sort of official job to have.

Office of the Ombudsman.

And finally a drawing from the cruise, a cellist, drawn while I was watching the Bel Canto String Quartet play one day. 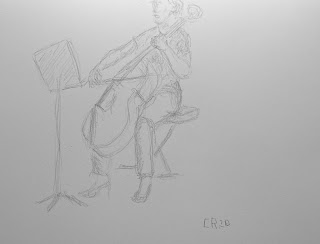 Posted by Cooper Renner at 1:40 PM