Atasso is a Bulgarian-Canadian artist who has been spending summers in Malta for several years, doing caricatures of passersby. Born and raised in Bulgaria (he began drawing at age 4), he emigrated to Canada in 1990, as the Soviet Union was falling apart and it became possible for people to get out. He has since become a Canadian citizen and, besides working in Canada, has worked during the warm months in many places, earning money with this "popular" art, while carrying on more serious art and university course work as well. Among the places other than Malta where he has spent time: Cancún, Miami, Puerta Vallarta, Berlin, Munich, London, Athens. His work has also been exhibited in Canada, Bulgaria and Spain. He is currently working on an academic fine arts Ph.D. from Bulgaria and U.K. certification as a university instructor through the Institute for Learning. Once these academic hurdles are behind he would like to teach at the university level in the U.K. if possible, but if not, in any English-speaking country. He is particularly interested in creating historical landscapes and cites Italy and Greece, along with Malta, as places with historical depth. Though he still has family in Bulgaria, the work situation there is not good, and he does not envision returning there to work. He said you can see samples of his work here. 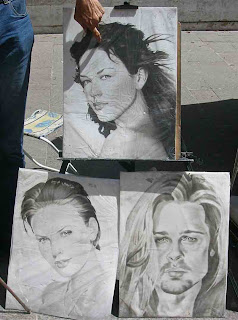 These drawings are of course realistic portraits and not caricatures, as you can see!

A busy day today. I spent longer over breakfast this morning, not just because I ate a little more and had an extra cup of tea, but also because the dining room was so full, another single traveler shared my table with me and we had an interesting talk. She is English and had already spent several days in Malta and was leaving today for four days in Gozo before returning to England on Sunday.

After breakfast and shower, I went back to Vodafone with my computer to let them figure out why my mobile broadband wasn't showing me how much of my data usage I had used. As it turned out there was a Mac interface (I guess that is what you would call it) that had to be installed, but which I didn't have initially. Then it was off to the airport to talk with Air Malta about changing my flight date to London. The bus ride takes about 30 minutes each way. While there I also got information about "flyaway" vacation packages the airline offers, in case I want to spend a few days in Rome while I am sort of "in the neighborhood."

Back in Valletta I had lunch, conducted the interview with Atasso, and had a cup of tea at Caffe Cafe. (I will hope to have an interview later with its owner. The fine coffeeshop has been in operation since 2006, and I visited it many times on my first trip to Malta. In fact today, when I told the owner I wanted to interview him and write about Caffe Cafe, he wouldn't even let me pay for my tea.) Then I went down to the public library in Floriana and spent a while taking notes from a book on the Maltese nobility, which will hopefully contribute some verisimilitude to the next Malta novel I am pondering. I will need to get more information there later, on daily life, significant events, population centers, and so forth in the latter half of the 18th century and the very early years of British rule. Then (get ready to laugh, ladies) I spent time at one of the local groceries reading ingredients of various cookie possibilities. I decided this time on "custard creams."

After a quick trip back to the guesthouse (one of several for the day), I went down to catch the ferry over to Sliema, but had to wait a while, so I wrote a postcard to one of my nieces and did the basic sketch work on a small drawing of Fortizza Manoel as seen from the ferry dock. Once in Sliema I visited Marks & Spencer, and I discovered that, just like in the U.K., M&S Malta also sells groceries, though on a much smaller scale. And boy oh boy, do they ever have the cookies! I'll be heading back in there, believe me. They don't however sell deli meat. Shucks! I made a quick contact with the travel agency in Cedar Hill and then, on the way out of the phone center, two young men in white shirts and black pants noticed my accent about the same time I noticed theirs, so we chatted for a while. They are both on their LDS (Mormon) missions: one has been here about 4 months if I remember correctly, and the other about 3. Before that, both were in southern Italy for several months, though I don't know if they were in the same place. One is from Colorado, the other from Michigan, and they are living in Mosta (famous for its huge domed church) and working from there, traveling by bus, not bicycle. (Personally I think it would be quite dangerous to ride a bicycle on rural Maltese roads, which are very narrow.) Of course they invited me to church, but they were quite pleasant about it.

So I have done more talking today than I normally so when traveling. I'll probably have a sore throat tomorrow! Happy Cinco de Mayo! 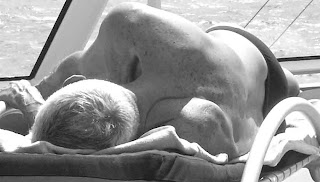 This photo is from the cruise. It was a day that was pleasant enough to sit out and I was rather taken by the odd shadows and curves and so forth in the way this man was lying out in the sun in relation to the angle I was at. That left shoulder looks almost thrown out of socket, and the "dip" between collar-bone, shoulder blade and neck on the right shoulder looks deep enough to cook oatmeal in!
Posted by Cooper Renner at 1:52 PM

Marks & Spencer!!!!! I love them! I'm now very jealous. That's where I get my fab-o sandwiches when I'm in the UK.

I don't know about those custard creams. They might not agree with your delicate constitution.

I say, Toss caution to the winds! Live it up! You're only young once!

Go for those custard creams!