"Dirty Dancing"--not that I did any of it

I think I've fallen in love with the new version of the London taxi. If they were available in the US, and got a recommendation from Consumer Reports, I might want to buy one. You can see a couple here, plus part of a third. I suppose more are black than any other color, but they aren't all black, and many have advertising on the side panels. 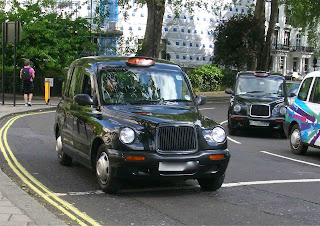 This morning I took it fairly easy because I had a long walk ahead of me in the afternoon. I sat in Kensington Gardens for a while and worked on a sketch using the "In Memory of Speke" monument--Speke is one of the explorers credited (wrongly?) with finding the source of the Nile in the 1860s. I searched down Queensborough Terrace for the house where the Greek poet C.P. Cavafy had lived for a while as a boy, and I had porridge and a cup of tea at Pret a Manger. It was very sunny early on, though the clouds and sun played tiddlywinks with each other from about 9 a.m. on. This has been the sunniest day so far, I suppose, since Tuesday, though it wasn't as warm as Tuesday, and I don't think we've come close to 70 degrees yet. If we hit 70, the Londoners will complain of the heat, and I will be ecstatic.

My long walk this afternoon was due to "Dirty Dancing," performed in the Aldwych Theatre which is, unfortunately for me, one of the theatres farthest to the east in the theatre district. Along the way I had my Marks & Spencer lunch again--apple, ham, scone, pot of tea--and a bit of sightseeing as I walked. I found Denmark St, famous in English pop music history--The Kinks have a song named after it--and the Theatre Royal, sometimes called Theatre Royal Drury Lane. I believe "Oliver!" is being performed there now, though I probably first heard of it because the musician and singer Robert Wyatt, whom I like, released a live album recorded there. One side of the Theatre is on Drury Lane, though the main entrance nowadays is elsewhere.

I got to the Aldwych about 2:15 and bought the ticket Dominique had set aside for me. Seating didn't open till 2:30, so I roamed a little bit and found Sir John Soames Museum, which is supposed to be really fine. Last time I tried to find it and couldn't, so maybe I'll be able to visit it next week. I was on the verge of telling my friend Lou Ann that the museum only exists if she is in London. I also passed the "New Academic Building" of the London School of Economics and took this photo simply because, if I remember correctly, Mick Jagger was an LSE student before he got rich in another kind of business entirely. 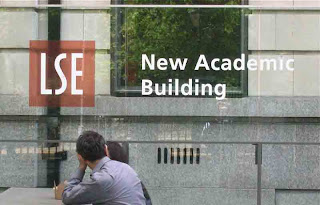 And right across the street from the Aldwych Theatre is BBC Bush House. I don't know what goes on in Bush House as opposed to other BBC buildings, but I thought it was worth a photo, especially as so many of you love Masterpiece Theatre. 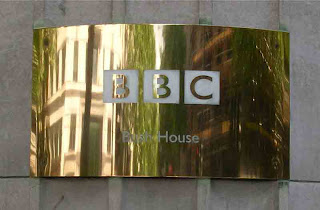 And here is the Aldwych. 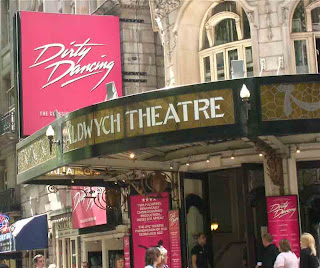 The ticket Dominique set aside for me was quite a good one: in the Dress Circle, which is sort of the first balcony, but not high and removed as you think of a balcony being. The most expensive floor, I suppose, is the Grand Circle, which looks, as far as I could tell, to be a bit below the level of the stage, but I guess it angles up. My seat was C13--on the third row of the Dress Circle, smack dab in the middle. Thanks, Dominique! I don't remember enough about the movie, which I saw back in the '80s, to know if the musical varies much in plot or not. There is a subplot about the civil rights movement and young people at the resort wanting to take part in that; another subplot about one of the dancers having an abortion; and of course a lot of music and dancing. Some of the music was performed live--a young black woman and a young white guy were the stand-out vocalists--and some was recorded, including songs from the early '60s like "You Don't Own Me" and "This Magic Moment." The big climax scene features the hit song from the movie and an extended dance number featuring 20 or so people. The set was fairly simple--a staircase on each side with a screen door into one of the "cabins"--and other props and furnishings came and went as needed. The biggest part of the stage revolves, in two different pieces, and this was used effectively in the staging, as was the three-piece video screen at the back, which allowed them to show rain falling or scenery passing by as a car drove, etc.

On the walk back west after the show I sort of stumbled onto Covent Garden Market. Covent Garden is famous, but I can't for the life of me think why! Maybe 0ne of you will type some information into a comment. I also came across this performance at the intersection of Oxford Street and Tottenham Court Road. The three guys were playing "Crossroads" in the style of Cream as I walked up, and they sounded quite good. But still, I don't think they are transformation of Tottenham Court Road advertised on the billboard behind them. 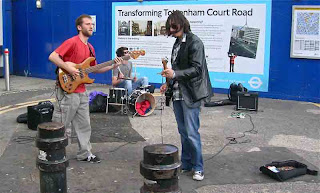 And this was a horse-riding class of some sort going on in Hyde Park.

One thing you notice about London, if there is any sunshine at all, is that the parks (or gardens as they call most of them) really get used. People and dogs are everywhere, and as I mentioned above, their ideas of cold and heat are quite different from mine. Yesterday, for example, as I walked through Hyde Park on my way to the Tate Britain museum, when the weather was completely cloudy and very chilly, I saw a mother and son, both in short sleeves and looking very exercise-y, while I sat on a bench with my pound cake and hot tea and two or three shirts or windbreakers on, and still right on the edge of wanting to escape to the Bahamas. Then, just a few minutes later when I was walking again, I passed what looked like a father and grown son, with a dog, throwing a frisbee disk back and forth, and the young man had his shirt off. But it's also true that I'll sometimes see people, especially women, bundled up even more than I am.

I repeat the question I have asked in this blog before: will I ever feel 80 degrees, outside, again?
Posted by Cooper Renner at 2:25 PM

For crying out loud, Covent Garden was the main market place.
All official London taxis are black. These cabbies have done "the knowledge" and are held to standards.
Byron owned Drury Lane Theatre (part, that is).
If you go to the Soames you will have to ask to see the Hogarths.
And notice the monument in the courtyard to Fanny--ask about it.
Very cold and rainy where I am, but I'm right on the water.

Maybe Tuesday I can get to Soanes. Closed on Sunday and Monday. Monument to Fanny? Hmmm.

You like cold and rainy, right? I've given up on ever being warm again. Outside, I mean. I want to be warm outside again before I die.

I think I'll start calling it Convent Garden, just to be a nitwit.

So these taxis that are painted different colors, but are the exact same car model, are still poseurs?