The Association of Model Engineers and other happenings

Another eventful day, beginning with a good conversation with a couple from Lyons, Julian and Andrea, over breakfast. Julian is a retired headmaster, and they are RVers! (Not full-time.) Tomorrow they will go to Gozo for a couple of days, then return to Valletta for another day or two before flying to Barcelona, where they will visit with the family of one of their children and then go on in their mini-camper to Valencia to visit the family of their other child.

After breakfast I walked through Floriana and down the slope to the Ta' Braxia Cemetery where I worked on a drawing of some broken statuary, which I will probably work into my illuminated novel Disbelief. As I strolled the cemetery on my way out, I met a young German who on Friday finishes an internship here in stonemasonry. He has been working on restoring stonework, which decays here very quickly because of the climate. He has already been studying in Germany, and I suppose this may complete or come near completing his degree (certificate?) I think he would have been fascinating to interview if he had not been working (I didn't want to interrupt him for very long), and if he weren't about to leave the country. (Next Wednesday, I think he said.)

Then it was on to the Scout Headquarters, back up the slope, to visit the exhibition of The Association of Model Engineers. I didn't have a great deal of time because I needed to be at St Catherine's Church in Valletta for a 12:30 performance, so I returned later in the afternoon. (I'll combine the two visits here.) The modelers do all kinds of work, from kit cars, beautifully painted and detailed, to figures and figurines (which are mass-produced, but then hand-painted), to ships (some based on Maltese forms), to completely "scratch-built" model engines and houses. I found the "engineering" section particularly fascinating. Joseph Cutajar's work was represented by quite a number of hand-built replicas of steam engines, all of which operate (though on electricity). The one I have photographed for you here is the Victoria 2: the blurring on the left is because the engine was operating at the time! 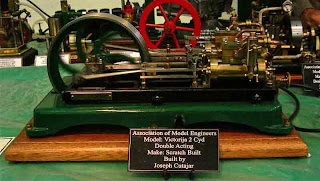 Another engineering modeler was Carmelo Farrugia, whose Beam Steam Engine I have photographed. It too is in operation in the photo, so the spokes of the red wheel are a blur. You can also see Mr Farrugia's hand in the photo. 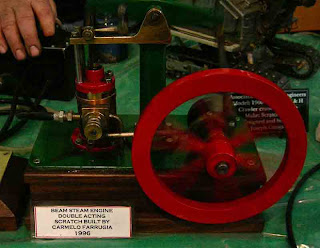 Other engines, including an aeolipile, were the work of Raymond Calleja, who was unfortunately not there when I was. There was also a small train unit represented. The members of this division don't make their own model trains, of course, but rather the settings for them. A work in progress--an imaginary English village--was on display. Two of the three current members of the group are emigrants from England, including Chris Holland who was running the trains at the time.

The 12:30 performance at St Catherine's, my first for this trip, was by Ramona Zammit Formosa. She had intended to play a harpsichord, but just before the performance it had broken three strings and couldn't be gotten into tune again in time--humidity was a factor, the host said. Instead she played an 18th century piano, the same kind Beethoven played, we were told, and in fact this particular piano's serial number is only a few numbers different from Beethoven's. 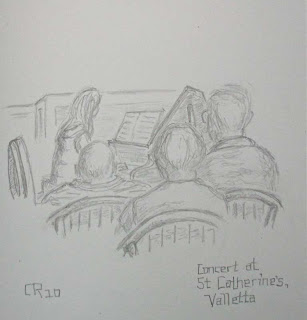 Mrs Zammit Formosa played works by Purcell and others in the concert of about 45 minutes. Here is a sketch I worked on during the performance, even though my glasses were skewed. Yes, after I sat down inside, I took off my sunglasses (prescription), and the right temple/leg of my regular glasses broke as I put them on! Fortunately I have an old pair of glasses with me on this trip, and the prescription is not terribly different. Also fortunately for me, I was able to get the glasses to an optician later in the afternoon and the repaired frames should be ready for me about 4:30 tomorrow.

I spent a little time in the Lower Barrakka Gardens, reading Thomas Hardy's The Return of the Native and taking a few photos. One was of a floatplane taking off from the Grand Harbour, but it's probably not interesting enough to post--it just looks like a plane over water! There were also two jet skis in operation on the harbour at the time I was there. While I was reading, a young couple who are also staying at the guesthouse where I am walked by, so we talked for several minutes. They are here for the first time and are actually in a room just a couple of doors away from me.

I visited Marks & Spencer in Valletta--I can't remember if I went into it in 2007 or not. It has a larger "food hall" than Sliema's store, though of course it is nowhere nearly as large as those in London. But it also has, like the London stores and unlike the Sliema store, a Cafe Stretto. I had a cup of Assam tea and a vanilla/chocolate muffin. It was the biggest cup of tea I have had in Malta (though some shops also offer pots of tea), and was only one euro. Let's hear it for Marks & Spencer! At the Champion (yes, the American sports company) I bought another polyester t-shirt, just plain white. Now I will have three polyester shirts (one from Lisbon [coming unstitched in the underarms, but I think I brought a tiny sewing kit], one from Barcelona, and this new one) for easy washing and drying. I mentioned that I was doing that to the woman at the register, and she said that this one would even dry out while you are wearing it! I don't think I'll need to put it on wet, but I guess I can in a pinch.

Lou Ann will be glad to know that I am talking more on this trip--to the people I am sharing breakfast table with (two of three mornings so far, but who knows what tomorrow will bring?) and sometimes just to people I stumble across, like the student stonemason or the street artist I profiled yesterday.

And here are two minor health notes for Mom (and for Jessie, if Faye conveys this info to her when she reads the blog):

1] the heat rash which has been bugging me for months at a time the past couple of years (you'd think I'd become 8 years old again!) seems to be improving now that I am in Malta. I don't know if it's something about the climate or if switching mostly into these polyester shirts;

and 2] the arthritis pain in my thumbs has gotten much worse, beginning by at least the middle of the cruise. I could understand if it was only my right thumb, since I probably grip pens and pencils much harder than I ought to and since I broke one of the bones behind that thumb many years ago, but it's both left and right, so it's a mystery to me. Is it because I've got more potatoes in my daily diet since I have limited options while traveling in this fashion, and potatoes are supposed to aggravate arthritis? Your guess is as good as mine. Another peculiarity of the cruise was that, for a great deal of the time, the underside of the third knuckle of my right hand was incredibly sensitive if I put any pressure on it at all. I don't know if the weight machines on the ship were irritating the nerve endings, or if it was just something crazy. But that sensitivity is gone now.

Well, I think I need to get a can of tuna and go supplement it with a cup of tea and probably (don't sigh too much--my options are limited) an order of fries. I'll probably hit McDonalds tonight--their fries aren't bad. Y'all take care!
Posted by Cooper Renner at 2:02 PM

yup potatoes, tomatos and eggplants aggravate arthritis ... good that your talking to people

Nightshade family, all those veggies.

I know you don't like to take pills, but if M & S has a pharmacy, get some paracetemol. It's chemically identical to Tylenol (aceteminophen), or so they say, but for me it seems more effective.

Coop, I looked up Boots and there is one in Sliema. They'll have the paracetemol. And they will likely have some herbal treatments for your pain. They have a sleeping pill called Calmz that is so good I buy about six large bottles whenever I'm in London. It's just valerian and hops, no melatonin (which my doc says messes up the sleep cycle). I couldn't find an address, but it's Boots the Chemist.