Henry Moore and the Duck

If 65% of my time in Malta was eating and walking, that figure in London may be closer to 90%, most of it walking. As I walked this cold gloomy morning toward the Tate Britain Museum, I bought a cup of tea and a slice of lemon pound cake and sat on a bench by The Serpentine, a winding stretch of water in Hyde Park, to consume. This little rascal seemed to be quite interested in the fact that I had food in my hand. Look at those pink feet! 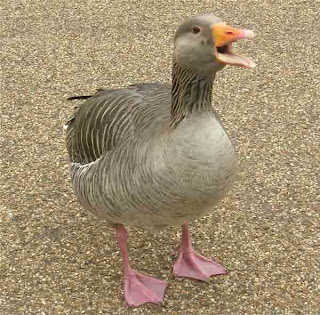 As I passed under the Wellington Arch, in honor of the famous military figure the Duke of Wellington, I noticed the sign saying you could climb up to the top and see the views. I don't recall ever seeing that sign in 2007, but maybe I just ignored it. Anyway, I paid the 3 pounds 70 pence and went up. There are three or four floors as you go up, which have various kinds of photo exhibits in them. But at the top, which is actually not quite at the top, you can go outside to the west and the east, I think, and look down into the little park below, and down along the road called Constitution Hill, which leads to Buckingham Palace. You can see the top of the tower of Big Ben off in the distance, and most of the giant Ferris wheel called the London Eye.

There was a huge crowd at Buckingham Palace, getting ready for the changing of the guard, but there were lots of divider fences/screens in the area too, and also over by the Houses of Parliament, so I presume something big is going on this weekend. I didn't see a sign to tell me what it was, though. As I got closer to the Tate Britain it began to mist lightly, but not quite enough for me to get the umbrella out. I had the hat on, and that keep most of the mist off my glasses.

I've been to the Tate Britain before, and to the huge and wonderful JMW Turner exhibits there, but today's main reason was that there is a special exhibit there now of the work of Henry Moore. Those of you who live in Dallas have probably seen the monumental bronze "Dallas Piece" which is on the lawn in front of the Dallas City Hall and is a fairly late work, made of three pieces. The works in this exhibition were from the '20s to the '60s and included sculpture in wood, stone and bronze, and drawings, some of them studies for sculptures and some of them for their own sake. His work in the 1920s, when he was young, gave me a feeling of African tribal art and occasionally even Central American work, like that of the tribes before the Spanish invasions. Mostly he was working with the human form--mother & child combinations were prevalent--but in a kind of stylized and not quite realistic way. Around the late '20s several of the female figures--some sculpture, some masks--had strange shapes out to the side or back of their heads. I eventually decided this was an unusual way of indicating some kind of bun-style in the hair, but my first thought, given that some of the earlier work looked like American tribal art, was that the woman's head was sort of morphing into an animal's head. Some pieces during this period also involve string, which surprised me.

As Moore got older the shapes got more and more abstracted and distorted, though most often still based loosely on the human figure. During World War II he quit doing sculpture and concentrated on drawing with various media--crayon, pencil, watercolor--and there was a gallery here focused on drawings inspired by the air raid shelters and by coal mining. These are often dark and moody pieces, and really give a different sense of his work. He compared the air raid shelters, and the people being crowded into them, to the holds of slave ships, and he thought that coal mines were a good representation of hell.

Photos weren't allowed of the art, unfortunately, but as I later walked north from the Tate, I noticed this sculpture which certainly looks like a Moore work (though it may not be) so I took a photo of it for you, with Parliament and Big Ben in the background. 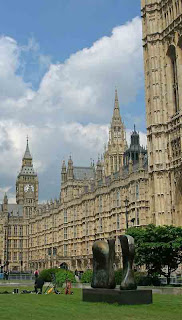 From here I went north along the banks of the Thames River with the Victoria Embankment Gardens to my left. The obelisk called "Cleopatra's Needle" is here though, as the plaques on it note, it is an obelisk of the Pharaoh Thutmose III (about 3500 years ago), which Ramses II later added some carving to. 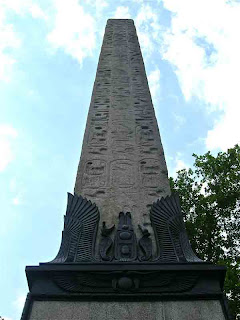 It was moved in ancient times to Alexandria (founded by Alexander the Great) and erected there in 12 BC, almost 20 years after Cleopatra committed suicide--so your guess is as good as mine as to why it's called Cleopatra's Needle. It was given to Britain by the ruler of Egypt almost 200 years ago. I can't remember if he was called a Sultan or a Bey or what exactly.

It's flanked on two of its four sides by sphinxes which I presume not to be ancient, since they are in awfully good shape (minor damage from bombing during World War II) and look to be quite sheeny bronze. 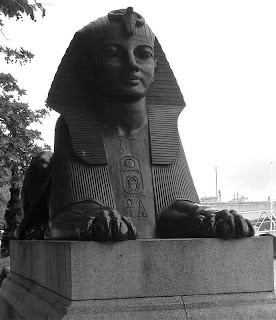 From here I went on to the theatre area, to find out which theatre "Dirty Dancing" is showing at and if there had been a ticket set aside for me there. As of yet, there isn't, but the man said they often aren't actually put there at the ticket counter until the night before. So I may be going to see it at the matinee tomorrow or I may not. I took a good luck at the brochure for this time period from the discount tickets company and may check into either "The 39 Steps" or "The Mousetrap," both of which have matinees next Wednesday.

I also dropped into St-Martin-in-the-Fields church, which was undergoing a bunch of work when I was here in 2007. A group of 8 musicians was rehearsing inside, with various people listening in, so I joined them for a little while. There is a concert tonight, so maybe these are some of the musicians who by now have already been playing this evening. I didn't have my drawing materials with me, so I read my Nemirovsky book while listening. But I didn't stay terribly long: I could see the sun shining outside and didn't want to miss too much of that. And, as you know, rehearsals aren't quite as interesting as actual performances, since there are stops and starts and so forth. Still, when they were playing straight through a composition, it was quite lovely.

I noticed a sign about going down the stairs to the crypt, so I did. As you can see it's now a cafe! 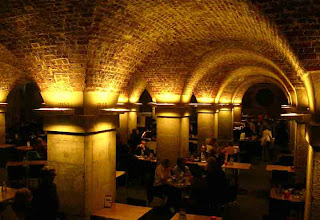 As it turns out, the church has a very large amount of space underground, a lot of which looks new. In addition to the cafe, there's a gift shop and rooms for musicians and so forth. There was also a display about the St John Bible which is apparently still in production--the information says it is the first illuminated Bible to be produced since the invention of modern printing in the 1400s.

Later, after supper and a quick stop by the hotel to get my drawing materials and get rid of my backpack, I went over to Kensington Gardens, just a few blocks away, and sat and drew for a little while: the sun was shining, though it was still a bit chilly at 6 p.m. I had ditched the sweatshirt but was wearing both windbreakers. After drawing I walked down to the Diana Memorial Fountain, which is a circular sort of concrete stream, and saw this new sculpture, just unveiled last September, which I had first seen this morning, from the other side of the water, as I walked toward the Tate. It's called Isis and is quite large, as you can see from the man standing to the side and behind it. That whiteness in the green, farther back, is back of the Diana fountain. 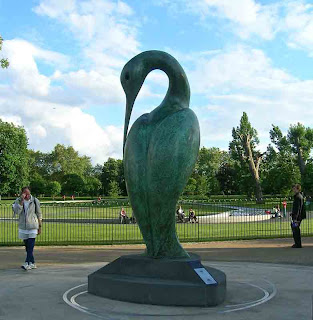 Well, there may be showers tomorrow, but also some "brightening up" maybe in the afternoon, and the temperature may soar all the way up to 66! I'm pretty sure it was in the 50s this morning, though when the clouds started to clear this afternoon--which didn't get really serious till about 2:30 or so--it warmed up a good bit. For a while I even took the sweatshirt off and walked around in my short-sleeved shirt!
Posted by Cooper Renner at 1:38 PM