A kind of low-key day again today, though that doesn't mean I did any less walking. I'm consciously trying to eat more, even if it's "junk", just to be sure my body has something to digest besides itself! And I've pondered once or twice if I expend more energy walking somewhere to get something to eat than I get back when I eat whatever it is. I think by this point my metabolism is racing even more than before.

One thing I did today was buy a new suitcase. The large-size carry-on which I brought with me (borrowed from my mom) needed replacing because I broke one of the wheel assemblies in Ft Lauderdale before I even got on the ship. I've looked at luggage at several different places, including at least 2 previous visits to the store I bought at today--only 3 blocks away. I was there four times today: first to look at the luggage again and discuss size (largest carry-on or medium non-carry-on), second to buy (largest carry-on), third to find out if they were still open (they were), fourth to exchange largest carry-on for medium non-carry-on. Between visits 2 and 3, I had moved things into the new bag from the old bag (and elsewhere I have things located at the moment) and decided I really needed a little more space, both so I wouldn't have to cram so much and so that I could carry less in the backpack when I'm making a flight. On the Air Malta flight to London, it will be no problem checking the bag. Flying American from London to the US, I will probably have to pay an additional fee to check the bag. Ridiculous, isn't it?, since American is not a "budget" airline.

Anyway, now the new, larger suitcase is sitting on its 8 little wheels to the side of the old one, which I won't bother unpacking again and rearranging, since some of the things I want to go into the bottom of the new suitcase are things I'd rather keep out right now.

One of the bad things about Sundays in Malta is that many things are closed, including Marks & Spencer, which means I can't have tea at Cafe Stretto and have to find other options. But today is Monday, so the cafe was there for me. I had my late morning tea there. My mid-morning tea (and don't forget my tea with breakfast at the guesthouse) was at CaffeCafe. I discovered it when I was in Malta in 2007 and visited there several times, using it as a wifi base the last few days before I left for London. 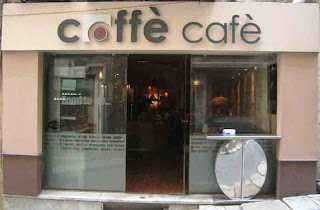 It's no longer a wifi hotspot, but it has done well enough that there are now three CaffeCafe locations on the island. One of them is in Sliema, within the Europa Hotel where I stayed for a month in 2007. CaffeCafe occupies the space that was a sort of lounge or living room for the guests at that time. That location caters primarily to tourists of course, but the other, in Mosta, is in a shopping center/mall and the owner told me its clientele is mostly university students. This is quite a success story for a small cafe that only first opened in 2006. I asked the owner if he lives in Valletta. He doesn't, but lives in Balzan, toward the middle of the island and near the San Anton Gardens where the presidential residence is.

While I was there, a friend of his came in. He was riding this lovely motorcycle. You'll notice the DHL emblem on it. DHL was a sponsor for the bike in a race in 2008, the young man said. I told them that DHL was out of business in the U.S. (it is, isn't it?) but apparently it's still cranking along in Europe. 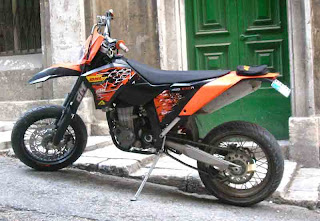 After these two morning coffees I headed over to Sliema where I sat in a little park and drew a couple of sketches. Then I went to the Tex-Mex Bar & Grill again for jacket potatoes and a pot of tea. While waiting for the potatoes to be ready--I was there before the lunch crowd--I read on my current novel, "Lady Audley's Secret," first published in 1861-62. It's now reissued by Penguin in a new series called "Victorian Bestsellers" which also includes two of Wilkie Collins's books and "The String of Pearls," the cover of which proclaims it the "original Sweeney Todd". I don't know if this series will be available in the U.S. or not. I'm thinking I might also want to read "Paul Clifford" by Edward Bulwer-Lytton. He is primarily remembered in the U.S., if at all, for "The Last Days of Pompeii" and for the first line of "Paul Clifford," which has passed into "bad writing" lore: "It was a dark and stormy night." Myself, I don't find it such a bad line. Of course nights are dark, you say. Yes, but some are darker than others.

I also visited Books Plus, both to give my copy of "The Return of the Native" to the guy who works there and to buy another book to read. The clerk Kris Green mentioned when I bought "Return" that he had never read it, so I told him he could have it when I finished. Certainly I don't need to be carting it around in the luggage. The book I bought is a mystery, set in Vienna about a century ago, called "Fatal Lies" by Frank Tallis. From the blurbs on the cover, it looks like this book is (or was) available in the U.S., but I wasn't sure I had seen it. The clerk and I got to talking as I checked out. He is part of a writers' group here that runs an online magazine called "Schlock" which I want to look up. He is interested in writing himself, primarily in science fiction, but wants work which is well-written rather than just standard potboiler material. He mentioned particularly being impressed with Philip K. Dick, an American writer who died a few decades ago. The movie "Blade Runner" was based on one of his novels.

By this time my jacket potatoes had worn off, so I headed to the supermarket to get another tube of detergent for hand-washing clothes, a six-pack of tomato juice, and 150 grams of ham to supplement the jacket potatoes. I ate it sitting on a bench on the sea wall in the shade. (Shade is scarce in public places in Malta, unless you are in an outdoor restaurant. It seems like they would plant trees and put up umbrellas and screens, since this is one of the sunniest and warmest places in Europe, but they mostly don't.)

Back in Valletta I took care of the luggage, though that wasn't done all at once; had another cup of tea at M&S, along with some sandwich creme cookies; and spent some more time in the National Library. This time I concentrated on the book from 1810 intended as a guide to Malta (particularly Valletta) for convalescents needing a warm sunny climate. At that time the city had 24,000 residents Dr Domeier says, and you'll be glad to know that pigs were by then no longer allowed to run in the streets. The "milk man," however, did bring his goats from house to house, where he milked them and sold the fresh from the tap milk to his customers. There were also frequent performances by the regimental bands, as well as operas, tragedies and comedies at the theatre. All in all, it sounds like the English both tried to bring a bit of England with them to Malta as well as enjoying the Italian cultural elements which remained from the days of the knights.

I had my supper at Upper Barrakka Gardens again--the wind was quite chilly--and tried once again to get a decent shot for you of the Lower Barrakka Gardens from the Upper. I thought this one is maybe a little interesting because the gardens are pretty much in shadow as the sun has lowered, but the low dome of the Siege Bell Monument has caught the sun, as has the breakwater farther behind. In fact the breakwater is so bright is washed out to some extent.

Ah, so Malta has yet to adopt the 24/7 mode of doing business. I kind of like that. But I bet they will soon to the lure of the almighty euro.

"By this time my jacket potatoes had worn off, so I headed to the supermarket to get another tube of detergent ."

I know. You list edibles as well, but it's a memorable opener.

They will soon succumb. I don't know where succumb wandered off to in my first comment.

I wish more things were open on Sundays. Sundays can be a little "dull". Some of the local shops--as opposed to the chains--still close for siesta for 3 or 4 hours mid-day--like 1 to 4 p.m. for example.