These past two days have been a little too tumultuous and changeable for the dullness of Renner. On Monday morning, I left the ship about 8 a.m. for a bus ride to Rome's airport (which is a long way from Rome and has two names: some call it Fiumicino; some, Leonardo da Vinci). Got there with no problem about 9:30 or a little earlier, had a baggage trolley provided without charge by the cruise line (I guess it was included in the $91 fare to the airport), and wasted a little time (eating!) waiting for Air Malta to begin printing boarding passes and accepting luggage. That went without a hitch too and, with only my backpack to weigh me down, I could wander a little more freely. I had some bottled fizzy water and some cookies at a little eatery, and there met two couples from the Tulsa area. I had heard one of the men talking and thought, "There's an American accent," so I told them that after I sat down. They had flown in from Chicago, were awaiting another couple, and were flying on to Venice to begin a two week vacation also to include Florence and somewhere else--maybe Milan. It was funny to run across "nearly neighbors" so far across the ocean.

It wasn't too much longer before I boarded the plane and we were off. Once again I saw Mt Etna from the window as we flew over Sicily--a nice sight. When we landed in Luqa, there was no going through passport control because we had flown from one Schengen Visa country to another. The Schengen Visa is a joint visa arrangement that most EU countries share. I wasn't sure that I was supposed to be here without having my passport stamped with an entry and expiration date, but I was assured by the information center that I was all right. Soon I was on a bus and riding a roundabout way to Valletta. It was kind of strange because, even with my very elongated (or slow) sense of time, I felt as I looked out the windows that I just been here: it all seemed so familiar. I talked briefly to two girls on the bus who had also just come from the airport and are from Seattle! I told them not many Americans come to Malta and one of them said, "That's fine!" Then this morning I saw one of them again in the breakfast room of a nearby hotel (more on that later)--apparently they have come to work, not just to visit: perhaps some kind of internship. Or maybe they have Maltese family.

I also talked to a high school boy on the bus who was on his way to take an English exam. He said he would like to live and work in the UK or Italy once he finishes school: Malta is boring for him, since it's home. He also explained that his parents were very adamant about speaking Maltese and that he only began to learn English when he began school. 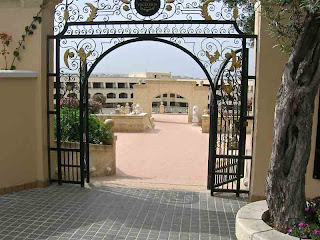 This is the Grand Excelsior, a hotel that probably wouldn't take to the likes of me inside.

And then we were at the bus terminus at Valletta: terminus not terminal, I suppose, because there isn't a building. It's just the parking lot the buses run from. It was a bright sunny day, and I was feeling really good about being back here, but I got a jolt when I got to the guesthouse. The owner explained to me something I had not understood on the phone when I made the reservation for several weeks: she operates as a bed and breakfast and charges by the person, not the room. Therefore my room, which has two beds, would normally make twice as much money for her if a couple were staying there. So she suggested I should pay more (not double) but more than the 20 euros I was expecting to pay if I wanted to stay for such a long time as I was planning. Those of you who know me well know that sudden changes of plan make me very anxious and uneasy. I wasn't ready to think about staying the entire length of time at a rather higher rate, and spend more money than I had such of loosely alloted in my head, but I understood her interest in making more money off the room if possible. Several ideas and possibilities and ponderings passed through my mind as well as between her and me over the next 24 hours, and I checked out other places to stay, not immediately, but later this month--and that's why I ran into the girl from Seattle again: the hotel where she is working is right down the street from the guesthouse. I also looked into another guesthouse--significantly cheaper, but not as attractive and spruced up--and the Europa Hotel, which I stayed in last time in Sliema. After all this worrying and fretting and feeling disoriented, the upshoot is this: I will stay here in Valletta for three more weeks (22 days in all) at the original price I thought I would have, and then I will move over to Sliema and stay in the Europa again: it will cost a little more, but I will have my own bath and TV. I won't have a room overlooking the Mediterranean this time, but the booking agent promised me a room at the back, which will have a balcony overlooking the backyard--whatever that turns out to be--and I will be on the top or next to the top floor, which should be quieter. The Europa has been spruced up in the past three years, so it doesn't seem a bad deal to pay a little more than before. I saw lots of students there, but also a number of old people like me, so hopefully it will be quiet enough for me, especially as I will be at the back away from the club on the ground floor.

Well, all of that didn't get finalized until about 4 p.m. today so I was feeling frazzled and fretful for a while. Fortunately I had things to do which kept me occupied--though one or two of them were kind of frazzling as well. I went to a Vodafone shop to buy an "Internet key" (which is what they call the USB modem for mobile broadband) and a month's (or 3 GB) of usage. Since I had not had terribly rewarding experiences with mobile broadband before, I was apprehensive, but was hoping (and still am) that Malta's size will make coverage more regular. A few hours later when I got back to the room, got showered, got ready to plug it up and see if it would work, it didn't! I kept trying and trying, though, and finally it just sort of clicked in. I don't know why it didn't at first, but I'm glad it did later. I'm hoping it will start right up later this evening when I try it again (and hope to get this entry posted) with no problem. I guess you can't wish me luck because by the time you are reading this, it will either already have performed or I will have had to return to the Vodafone store to have things checked out, and then have had it perform correctly. 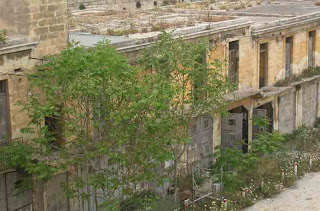 These ruins are just outside Valletta's walls and inside what I consider the moat, though it's dry and not filled with water. I suppose they must have been government buildings, but they seem abandoned now.

So, today I worked on the "housing issue"; bought The Return of the Native by Thomas Hardy at Books Plus, the cool independent bookstore still alive in Sliema; visited again with one of the owners of the Hollywood Grocery who does remember me (Check out one of the last Malta postings from 2007--something like June 20th, maybe?) and was giving me advice on suggestions on places to stay; registered with the American Embassy; stumbled onto the Public Library and found out that I can indeed use the Maltese history reference section to take notes for yet another Maltese werewolf novel I would like to do, set mostly in the second half of the 18th century; visited with a young woman and her child from Holland who were walking the same way I was into a section of Floriana I had never seen before, near the Grand Excelsior Hotel (!); and sat down to sketch in the Upper Barrakka Gardens. For the drawing, I used the "autographs and sketches" section of the Destinations journal which my travel agent Donna (Red Bird Travel in Cedar Hill, Texas) kindly had waiting for me when I arrived on the Equinox. 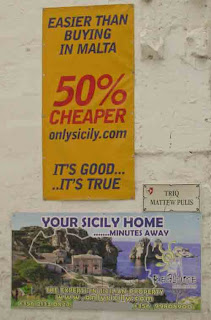 Malta is relatively inexpensive by European standards, but I guess the grass is always greener somewhere else.

Now soon here I will need to carry a packet of tuna with me and head, probably, to Burger King for some fries and a cup of tea to accompany the tuna. My lunch was turkey from the supermarket, an apple, a small bottle of tomato juice, and some potato chips. I know that some of you will chastise me for having potato chips and fries in the same day, but I have to get vegetable matter somehow, and I can't exactly cook up a couple of tablespoons of peas in the hot water from the sink in my room, now can I? So I will hope the apple and tomato juice, which I will try to have daily, along with a multivitamin at breakfast and supper, will keep me fit. I also had oatmeal for breakfast, and that is certainly healthy.

Well, I guess I will wind it down for now, and tell you more later.

And One More Posting About the Cruise:
Body Hair on Board

On a transatlantic cruise many of the guests spend a lot of time on the sundecks, in their swimsuits, so one has the opportunity to see a lot of body types and variations. To be sure, most of the guests are older than I am, so it's a study in senior science! I have not yet seen unshaven armpits or legs on a woman, but there are several men on board who might serve very well as extras on filmed versions of my Maltese lycanthropy stories. A couple of them have more hair on their backs than most men do on their chests, and it's interesting to see that, just as most men's heads tend to start going grey at the temples, there is also a pattern to white body hair, which seems to begin on the upper chest, especially in the center, almost like the white 'star' one sees on the chests of German shepherd dogs and some horses. In a hairiest chest contest, I don't think that I would make even the top 100 on this ship, but I think I would come in second in the legs contest. The clear winner would be the elderly man I saw sunning with his wife one morning. There are chihuahuas in the world with less hair than that man. 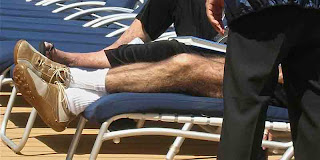 Posted by Cooper Renner at 2:05 PM

Perhaps I'll 'post' you suggestions for on-the-lam cooking -- one of my 'specialities'. Counting BK fries as vegetables is dicey at best!

There are lots of plain, simple things you can cobble together under the most straitened circumstances.

An electric kettle is a great convenience. Do you have one? No? You must buy one, if only for brewing tea.