Regaling You with My Diet and other oddities

Those of you who know me well know of my dietary irregularities. Allergies and food issues run in my family on both sides. All three of my siblings and I have one or more (sometimes many more) complications, and so do my most of my nieces and nephews. Ditto my mother, even though she's virtually a poster child for the AMA's dietary recommendations. So I thought I'd give you a line-up of today's consumptions. Do keep in mind that normally there would be an apple or applesauce in here, but I skipped that today because my GI system was a little off-kilter earlier this week.

8:30 Oatmeal, a small (individual-sized) loaf of fresh bread, and 3 cups of tea
11:15 Croissant (just a plain croissant: you'd be surprised how hard that can be to find over here)
12:15 About 4.5 oz. of sliced "chicken roll" and part of a 7-Up
1:30 4 oz. bottle of tomato juice
2:00 Cup of green tea and a "chococcino" muffin (Marks & Spencer: if they'd had just a plain vanilla muffin, I would have been ecstatic. At least the chococcino had some vanilla bits. I spit out the chocolate chips in this and just ate the cake part.)
3:30 Two small jacket potatoes (with butter and a bit of salt) and a cup of tea. These two potatoes were about the size we call "new potatoes" in the US. I had these at the Tex-Mex Bar & Grill in Sliema.
5:30 About 5 oz. of sliced "chicken roll" and some Pomsticks (potato sticks--more on these below)

It's now almost 8:30 here. Before long I'll probably have some vanilla cream sandwich cookies and some cola I didn't finish yesterday. I'd prefer tea, of course, but hotels and guesthouses in Malta don't have tea fixings in the rooms, like hotels in the UK do.

Now about these potato sticks. According to the package, a 100 gram serving (the entire packet size--I hope you wouldn't eat the entire packet at once) has: 6 grams of protein; 51 grams of carbohydrate, less than 0.5 of which is 'sugar'; 34 grams of fat; 4.2 grams of fiber; and 0.53 grams of salt. According to most American health recommendations, about 60% of one's calories should be carbohydrate, so this is a little low, taken in isolation, but of course one's entire diet wouldn't be Pomsticks. About 10% should be protein, so again this is a little low, but not bad at all for a non-meat or non-bean food. About 30% of your calories should be fat, so this is a little high, but not nearly as high as American potato chips which are about 60% fat. And with 4 grams of fiber to boot! Pomsticks are practically a health food.

What's particularly interesting to me about the fiber is this: those of you who have been to the UK know that the Brits are fond of "digestive biscuits," i.e. cookies that have some extra fiber thrown in. I reckon they'd rather eat a few cookies than drink Metamucil. But here's the deal: this afternoon I picked up one of those packets of digestive biscuits to see just how much fiber it had, and guess what: 100 grams of that particular cookie had 4 grams of fiber, LESS than the Pomsticks. Go figure.

Well, wasn't that an exciting story?

Today I attended my fifth concert, another Thursday noontimer at St Catherine's. Today it was Ramona Zammit Formosa on harpsichord (last week she played the piano because the harpsichord was having a bad time with the humidity) and her husband Silvio Zammit on flute. (Are they related to yesterday's James Zammit? I don't know.) They played works by Gluck, Bach and Stanley, an 18th century English composer I don't remember having heard of before. The restoration work inside the church continues, and we sat beneath scaffolding. The cupola above the nave is being redone right now, and there are boards blocking view of it: I suppose these boards are the platform the workmen are on. The main painting that belongs behind the altar is currently on display a few blocks away so that it's not damaged by the dust, etc. A photographic reproduction of it in its restored state is on display in St Catherine's right now, and can you guess? The subject of the painting is St Catherine! This church was the church of the Italian knights. The Knights of Malta (aka the Order of St John) were divided into 8 language groups, each of which had its own church. But the languages aren't exactly what we would expect, reaching back several hundred years as the knights do. Spain and Italy weren't single unified countries at that time, and even France was probably not as large as it is today. So three of the languages, if I remember correctly, originated from what we would call Spain today. And I think three also came out of France.

I also took a walk along the Valletta Waterfront (which is actually in Floriana). This is right near where the cruise ships come, and of course other kinds of ships and boats as well. There are shops along here, including Sterling Jewellery (sic), which I suppose is the same company as in the US. Also restaurants and clubs. Sometimes at night there are live music performances here, and there is supposed to be one of Italian music tomorrow night. If it's outside (and free!), the English ladies and I may see what it's like. 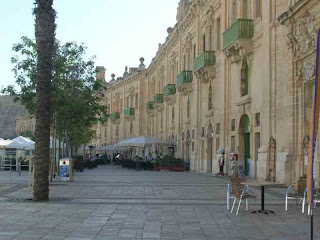 The waterfront faces the Grand Harbour which is quite deep and is to the south of the peninsula Valletta and Floriana occupy. Originally the knights were mainly located in towns on the south side of the harbour (the Three Cities), but Valletta and Floriana were built and fortified after the Great Siege of 1565 when the Ottoman Turks invaded in an attempt to wipe out the Knights. This first picture is of one of the ships docked there today. You can see it's not as large as the transatlantic ships, though I believe they do occasionally stop here too when they are doing Mediterranean cruises in the summer. I'm assuming the Disney ship that stopped here last week was an enormous one, though I didn't see it. This ship is called the Aurora. 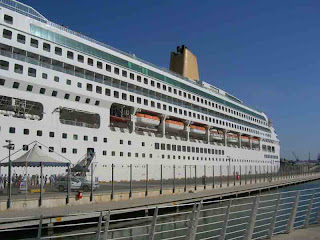 And here are two young men--two boys?--in a boat. Definitely not a cruise ship. 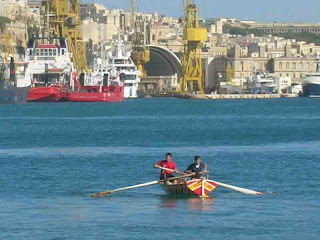 It is also in the Grand Harbour that I have seen jet skies zipping around and a float plane taking off--and in fact the float plane took off while I was there today. I tried to get a photo of it, but it escaped me.
Posted by Cooper Renner at 12:11 PM

What in tarnation is a chicken roll?

Are you still using your little CoolPix?

You spat? You spat out the chocolate? I envision a dreadful mess. Did you make a public spectacle of yourself?

A chicken roll is the poultry version of pressed rat and warthog.

Chicken roll is what the packet says: to me it just looks like sliced chicken, BUT one of the ingredients is potato! It's packaged in Malta, but the label says "Country of origin: Denmark".

Yep, still got the CoolPix. I pondered getting a newer better one, but didn't.

I picked out the chocolate chips that I could, but I spat or maneuvered the other ones--the ones that sneaked in with the cake--out. The saucer that came with the tea was a little bit of a chocolate-y mess, yes. But nothing a dishwasher couldn't handle.

Why can't shops have PLAIN OLD VANILLA MUFFINS? (B&N usually has Vanilla cupcakes, and I appreciate that very much.)

I am, by the way, a paltry version of pressed wart and rathog.

Chicken roll is what the packet says: to me it just looks like sliced chicken, BUT one of the ingredients is potato! It's packaged in Malta, but the label says "Country of origin: Denmark".

Yep, still got the CoolPix. I pondered getting a newer better one, but didn't.

I picked out the chocolate chips that I could, but I spat or maneuvered the other ones--the ones that sneaked in with the cake--out. The saucer that came with the tea was a little bit of a chocolate-y mess, yes. But nothing a dishwasher couldn't handle.

Why can't shops have PLAIN OLD VANILLA MUFFINS? (B&N usually has Vanilla cupcakes, and I appreciate that very much.)

I am, by the way, a paltry version of pressed wart and rathog.

When I come to Malta I'm going to eat two large steaks with extra pepper,salt and chile. Wash it down with a bottle of tequila. The Devil From Rodeo

Tamara, you and Lou Ann would have a lot of fun together. How are things in Rodeo? Is school out soon?

And you two can have anything you want at the Tex-Mex Bar & Grill, and I'll have jacket potatoes.

Nowadays, more hostels are taking on the form of budget guesthouses and as a result have attracted folk from a much broader spectrum than one would first imagine.