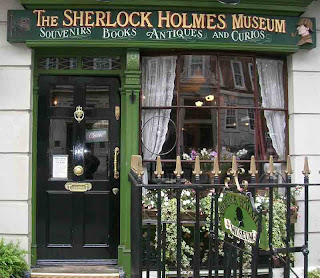 Can you guess where I went this morning? The Sherlock Holmes Museum is on Baker Street, and the posted address is 221B, like Holmes's address in the stories, but it's a bit of a trick. From its placement on the street, the museum ought to be 239 or something like that. Just a few doors down is a Beatles store, which has a zillion kinds of things related to the Beatles: new things like t-shirts and so forth, and old things like copies of the Beatles monthly magazine from the '60s.

But back to Holmes: the photo above shows the entrance to the gift and memorabilia shop. The museum itself is right next door: a man dressed as a policeman stands at the door and you show him the ticket you bought in the gift shop (6 pounds) and go inside. The house is several floors: 4, maybe. I wasn't carefully counting. The museum aims at doing two things: one, presenting the house as a real place as described in the stories, and two, exhibiting items related to the specific stories and incidents from them.

This photo, for example, shows what purports to be a letter Holmes wrote to Watson. (Notice the date is my birthday.) 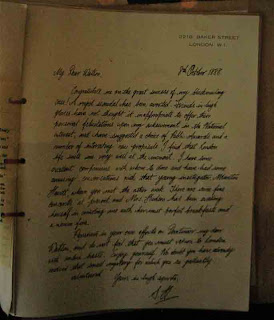 And this one, I think, intends to be the original hand-written text of "The Hound of the Baskervilles". I'm assuming it's supposed to be the accounts that Watson was mailing back to Holmes when Holmes was allegedly back in London. 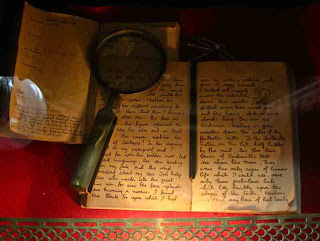 This one is the book which hides a gun. I can't remember which story this is from: I'm not sure I've read it. 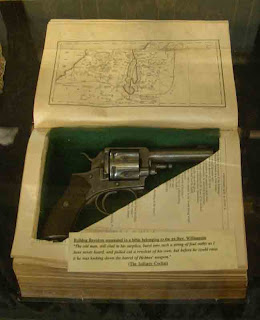 There is also a notebook of letters written to Holmes, many of them by children, and one from an official of the royal family, from St James Palace, replying to a request from the museum for an appearance by either Prince Philip or Prince Charles: I can't remember which. (I wasn't taking notes.)

This is Doctor Watson's desk. You can see his doctor's bag in the chair in the foreground. 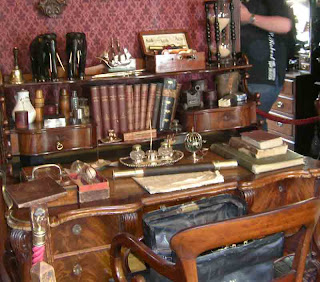 The parlour features a violin, of course, waiting for Sherlock to pick it up and play, and the VR (Victoria Regina) of bullet holes which Holmes shot into the wall in a bad mood one day. There is also an elderly man on duty there, claiming to be Sherlock Holmes, greeting visitors and suggesting they take photos of themselves with Holmes's or Watson's hat on and a pipe in hand.

Two of my sisters are big fans of mystery novels and movies, and they both would have loved being here with me. Maybe one day I'll get them to London. It was a chilly, mostly cloudy day today, and there were small fires in several of the rooms. And of course one of the rooms (I think it was Mrs Hudson's, Holmes's housekeeper) with a very nice "potty chair."

After visiting the museum, I sauntered down Baker Street, heading toward Oxford Street, and came across a nice little restaurant where I had a croissant and a pot of tea. (I'd had a pot of tea, toast and dry corn flakes for breakfast at the hotel.) It was a nice pause after a fairly long walk, and I read several pages of Thomas Hardy's "Tess of the d'Urbervilles" while there. Then as I wandered farther south and came to a Pret a Manger (Ready to Eat). I had noticed when browsing one yesterday that "porridge" was on the menu. I checked it out, and it's sort of precooked oatmeal with milk already added in. Anyway, I went ahead and checked it out, to see if it's something I can safely eat, and it seems to be okay. So that was my third time to eat before noon today.

I also spent some time at Waterhouse, one of the British bookstore chains. Mostly I wanted to buy a central London map that would show tourist spots, because my old map from 2007 is actually a map from about 1998 and some things have changed. But of course I looked at books too and saw a book of poetry I might buy by a British poet I've never heard of, as well as 3 books by Irene Nemirovsky, whose works I really enjoy. Of course I just bought one of her books yesterday, so first I need to get it read. Anyway I found a nice street and tourist site map, and that's all I bought.

My fourth meal of the day, my lunch, was at Marks & Spencer. I went to the Food Hall (their grocery store) and bought an apple, a packet of sliced chicken and a package of potato sticks, then went up to their cafe and got a pot of green tea. Then I sat at a table and ate INSIDE, instead of outside--it was pretty nippy outside today. I think this may be a very good format for lunch for me for the next several days. It's also easier not to make a mess as you slice your apple, if you're at a table instead of eating out of your lap.

After lunch I moseyed on toward the British Museum. My idea was that I'd actually visit the British Library, which is a half mile or so past the British Museum, and on the way there stop in at a bookstore I remembered from 3 years ago, and see what I could find. I did some browsing, both on the shelves and in a couple of their printed catalogs, and came away with an 1818 printing of Lord Byron's comic book "Beppo." This poem, set in Venice, introduces the stanza form and something of the tone that Byron would go on to use to such great effect in his unfinished masterpiece "Don Juan". (He didn't finish it because he died in Greece while trying to help the fight for Greek independence.) This copy I bought today is something like a fifth printing, and it's in an inexpensive paper cover, rather than the original cover, so it was only 25 pounds. Byron is a relatively inexpensive poet to collect, if you want to collect old editions, because his books were quite popular and went through numerous printings. So most of them aren't really rare. (A good thing for a retiree.)

After leaving Jarndyce, the bookstore, I went to Starbucks for another cup of tea (and a donut), then I decided, since I was right there by the British Museum, I really should go inside. So I did. I didn't really stay very long, but I did visit my old friend Gudea, king of Lagash in Mesopotamia about 4100 years ago, peeked at some Egyptian stuff, and took this photo of Philistine coffin lids for you. If these coffin lids offer anything like actual portraits, then the Philistines were pretty funny looking dudes. 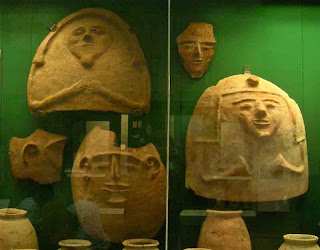 I decided to save the British Library for another day, but stopped in at one of the HMV music stores on Oxford Street on the way back to the hotel, a long walk. One of the clerks helped me find a number of offbeat experimental CDs, some by musicians I already know, some not. So there is another purchase I might make before I leave--one of those CDs. (Unless I find that they are available in the US.)

After a little picnic supper in Hyde Park at the Italian Gardens, I roamed the park a bit. It was quite chilly by this point. I had both sweatshirt and windbreaker on, and wouldn't have minded having the second windbreaker on as well. I got into a bit of a conversation with a young guy who seemed to maybe be a bit lost: he had the same problem I often have in London: he knew where he wanted to get on the map, the trick was actually doing it in reality. So he had me take a few photos of him with the Peter Pan statue, then as I was leaving him there, a young woman said something about the statue, and I asked her, "Do you need me to take yours too?" and she laughed and said no. I remember three years ago meeting a woman there, on my first day in London, and each of us taking the other's photo. It's a popular spot.

Then it was time to get back to the hotel and get my night-time routine done. On the way I saw this car which sort of puzzled me.

I wondered if it might be some kind of political comment or something like that, but on the back it says "Manual" and "Automatic", so apparently it's just a business that's run for (and/or by) immigrants from Iraq.

Wow. You have an awesome life! :) Sounds like you've been going on some very fun adventures.

I have always appreciated that business about Holmes and the air rifle and 'VR'.

It has been fun, Kristin.

Yes, Sheila, you and Holmes and VR seem a good match!