Some Comments on London Weather, and other subjects

Here are some pointers about London weather. Basically it comes in two forms: "rainy" and "sunny". If it's "rainy," then there will be 100% cloud cover and precipitation falling RIGHT NOW. If it's "sunny," the cloud cover will drop to as low as 90% coverage and rain won't be falling YET. See if you can find the blue skies over Sunny Buckingham Palace: 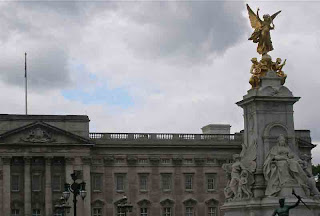 If you come to London in July or August, you might be able to leave the thermal underwear at home. From September through June, you should make sure you have at least four layers on hand to use as needed.

I had morning tea today at the cafe on the Serpentine in Hyde Park. I think the cafe is called the Serpentine not because it's on the Serpentine, but because once you get inside, it's almost impossible to find a way out of there. Then I passed Buckingham Palace, not long before the changing of the guards. These guys were, I presume, on their way to the changing: I passed them just a bit to the east of the Palace.

I went on my way to Westminster Abbey where I, as we Americans say, "went to church." It's the second time I've been to a Sunday service there, the first time in 2007 when the Archbishop of Canterbury delivered the sermon. I was not cold inside the abbey, but after all, I had long pants on, a t-shirt and a long-sleeved shirt. As I went down the side aisle to take my seat (I wasn't in a pew), I passed and/or stepped on the grave markers of Charles Darwin, Edward Elgar and Ralph Vaughn Williams. Many noteworthy English folk are buried in Westminster Abbey, but the floor is not almost completely tombstones as with St John's Co-Cathedral in Valletta.

The Abbey is right across the street from Parliament (to the east), and this assemblage was on a patch of empty lawn to the north of the Abbey.

I don't precisely who the protesters were--and if their protest had anything to do with the recent British elections or if it's something else--but at least one of their messages was quite clear! I wasn't too far north of here when I came across this street sign I thought some of you would enjoy. 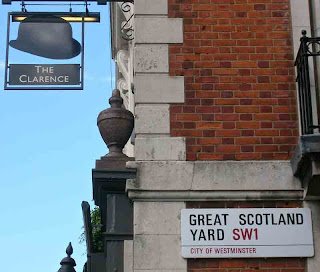 The Clarence (restaurant) is named, I suppose, after the Duke of Clarence. I think by this time I had already had my lunch, a jacket potato and a cup of tea at a place on either Parliament St or Whitehall (essentially the same road--most roads in London seem to change their names about every 15 feet). I moseyed on toward Trafalgar Square where I intended to spend some time at the National Portrait Gallery, just around the corner.

Trafalgar Square was packed with people--after all, there was some sun in amongst the clouds, the temperature was at least 60, and the wind wasn't strongest enough to rip a child of 40 or more pounds out of its parents' hands and into the sky: in other words, a lovely day. There were several painted people on the square, up close to the entrance to the National Gallery (not the same as the National Portrait Gallery), having their pictures taken with tourists and hoping for coins to be thrown into their hats. This guy actually looked even less human and alive up close than he does in this photo. He was wearing a mask, I think, because there was some kind of glass or plastic over his eyes, and this made him look artificial even if you assumed he was a painted human. He was also very good at standing still. 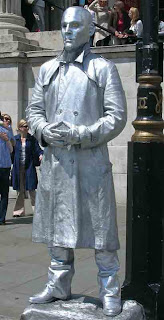 The National Portrait Gallery, which I did not visit in 2007, has some really interesting work. As one of the guards explained to me--after I asked her how to match 4 bronze busts with the name tags for them mounted several feet away on the wall--the criterion for including a portrait in the gallery isn't artistic excellence: it's the status of the person portrayed in connection with British culture and history. The most interesting to me were the more recent portraits--partly because you could actually compare these portraits against your own idea, from photographs, of what the people really look like (Princess Diana, for example; the Queen; William and Harry; Paul McCartney) and partly because the portraits aren't so deadly serious in tone as most portraits from earlier periods are.

There's a very interesting self-portrait of the English author and artist Mervyn Peake, done when he was quite young: his eyes are wide and glaring, and he has a thinnish young man's mustache. And others, even of people I couldn't identify, made me smile or laugh, just because the bright colors or the simplified portrayal style seemed so whimsical. I was interested to see portraits of a number of English authors--Tennyson, Browning, Byron, Keats and so forth--some of them done when the authors were too young to be terribly famous yet. But of course they associated with other writers and artists, and so they were painted, even if they weren't yet world-renowned. And there were two very impressive terracotta busts of English kings: George II (at least I remember it being the II) and James II. The George was a fine depiction of a middle-aged man, serious-looking and depicted in a Roman fashion, though I couldn't say if it really looked like him or not. James II was impressive for another reason: it seemed utterly ludicrous. He too was depicted more or less as a Caesar or an ancient hero, but his hair was so long and flowing, and the attitude and posture of his face and head so "heroic," that I practically had to laugh. I know very little about James II, but what I know about him doesn't mesh with that image. He was only king for 3 years because he was so insistent on his Catholicism, 150 years after England had gone Anglican, that he was removed and replaced with William and Mary.

Although I had visited the National Gallery before, I went through it for a while again after leaving the portrait gallery, just to see what I wanted to notice. There are several paintings by JMW Turner, though the big accumulation of them is at the Tate Britain; a couple by Caravaggio (who was, for a short time, a Knight of Malta), including a really disturbing painting of a young man being bitten on the finger by a lizard; and a nice exhibit of a Danish artist I'd never heard of, Christian Kobke, from the first half of the 19th century. He did a lot of portraits, as well as many landscapes of areas near where he lived. One really impressive painting, which looked to be about 25 square feet, is more than half sky, but it's not boring. Many of the other paintings were quite small.

On my way back "home" toward the hotel, I walked down Pall Mall, a famous street I don't think I strolled down last time, except maybe for a block or two. Here is something I thought you might enjoy. In Sliema, Malta, there was the Tex-Mex Bar & Grill; on Pall Mall, it's the Texas Embassy Restaurant & Grill.

I was afraid I would have to get all the way back to Sainsbury's "local" grocery store at the Marble Arch to get some food for supper, but on Piccadilly I stumbled across a Marks & Spencer "Simply Foods" which was open on Sunday, so I took my ham, apple, cookies and Coke to Berkeley Square for supper. It was about 5, and I spent about 20 minutes eating. I was wearing long pants, t-shirt, long-sleeved shirt AND windbreaker, and I was still cold by the time I finished. In fact, just a few minutes later, as I resumed my walk, the wind was so strong and I was so cold, I put the second windbreaker on, and walked at a very fast clip for several hundred yards before I was warm enough to take it off. Finally by the time I got to the Marble Arch, I was warm enough to take the other windbreaker off, but from there all the way back to the hotel, I was just a bit too cool with only the two shirts and body heat to warm me up. And if the wind by itself isn't bad enough, the sycamores (at least I think they're sycamores) are constantly setting loose their fluff, which I'm clearly allergic to, sneezing and dripping and feeling like something is caught in my throat. If I were still wearing contacts, I would probably have to be removing them and cleaning them a half dozen times a day from all the dirt and dust the wind is kicking up. I tell you the truth: I am having a good time doing the things and I am doing here, but if Richard Branson knocked on the hotel room door right now and said, "Pack up, dude; I'm taking the Lear to Texas tonight," I don't think I would say no. I am really tired of being cold and fighting the wind.

And now, tonight, I've got an older couple in the room next to me, and I thought that would be a good thing. But the man plays their TV so loud, I can hear it through the wall. So I just set my TV to the same channel, so the two soundtracks wouldn't be conflicting, but HE WON'T LEAVE IT ON ONE CHANNEL. I've changed the channel at least four times in the past 30 minutes because he keeps flipping. Hotels!
Posted by Cooper Renner at 12:00 PM

I spent two weeks in London in September (some years back) and enjoyed glorious blue skies and moderate-to-warm temperatures for 85% of my stay.

You are cursed. I am blessed.

P.S. it's that wild-eyed self-portrait Peake did when he was twenty-one of so, yes? He looks a bit like a panicked horse?

You probably are thinking of the self-portrait of Peake I saw yesterday.

Have you seen his Alice in Wonderland? It's on display at the British Library, but you can only see one drawing.

You will understand, I think, if I tell you that I find it absolutely incredible that London was warm in September of any year in any millennia. When I was here in 2007, in late June and July, I was able to wear shorts every day, I think, and I was warm--but that was late June and July. Warm? September? Impossible! And blue skies? Impossible to imagine for more than 12-15 minutes at a stretch.

But I will agree with you on your final point: I am cursed.

I have seen some of Peake's "Alice" illustrations. I quite like his Mad Matter and March Hare, as well as his Cheshire Cat. I don't own a copy, and I am wondering how many illustrations it features. I bet I could find out.

Re: Alice | "The complete set of [Peake's] illustrations for the book is to be exhibited at Sheffield University Library in June."

This from an April 4 Guardian article (http://tinyurl.com/ydljbeo) on Peake (and his papers at the British Library) that is worth reading.